The follow-up to a hit that misses slightly 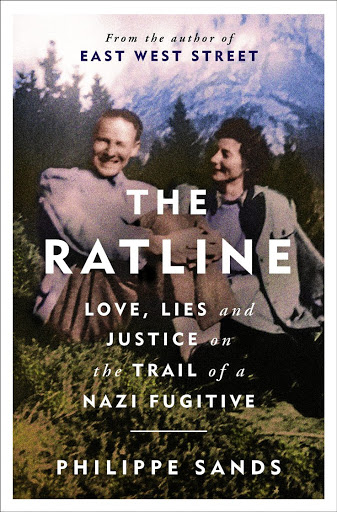 Philippe Sands’s previous book, East West Street, was a superb synthesis of family history, the Holocaust in Poland, the Nuremberg prosecutions of World War 2 crimes, and the establishment of a post-war system of international justice.

Its follow-up, The Ratline (Weidenfeld & Nicolson), uses run-off research from East West Street to explore a different set of protagonists, the Wächter family, tracking the path of lawyer Otto Wächter from his involvement in Nazism’s rise in his native Austria during the 1930s, his ascendancy to SS-Gruppenführer, governorship of Kraków and then Galicia in occupied Poland, and his attempts to flee after Germany’s 1945 surrender.

In Wächter’s hands lay the powers and mandate for destruction; his authority covered territories comprising the epicentre of the concentration and extermination camps, including Auschwitz-Birkenau, Belzec and Sobibór.

In the war’s aftermath the Allies adopted an often faulty, sometimes shocking, balance between justice and political necessity. A blind eye was turned to the abscondment of many war criminals; worse, the escape of some perpetrators was actively facilitated. Known as the "ratline", one of the primary escape routes was through Austria to Italy, then to South America.

Deep links between Swiss banks, Italian officials, the Argentina government, the Vatican and the CIA (called the CIC before 1947) funnelled former Nazis from justice. Upwards of 10,000 offenders escaped this way, recruited into covert Cold War spy networks or allowed their freedom to supposedly strengthen the right-wing bulwark against communism.

Wächter evaded capture by hiding in the Alps for three years before making his way to Rome, where he was given sanctuary by a leading Nazi-leaning Vatican bishop, Alois Hudal. Waiting for ratline transit to Argentina, a mysterious illness struck, causing his death in 1949.

Sixty years later, Wächter’s son, Horst, believes Otto was murdered — and is convinced his father was a good man. He hopes Sands can help balance the scales of his father’s reputation, and gives him voluminous records, diaries, and letters between his parents, which Sands uses to piece together the story of a high-ranking Nazi family before, during and after the war.

The Ratline is not a redemptive tale. The first third of the book is a stark unravelling of the mentality of Wächter’s wife, Charlotte, her communications conveying nonchalant depravity as she revels in high society while the whirlwind hits Poland’s Jews.

The measure of Horst is less clear-cut. He is affable and open, but it becomes clear that he has a perverted sense of his family’s history, and has compartmentalised his mind to avoid acknowledging truth.

As for Hudal, the book elicits disgust: here was a particularly loathsome member of an organisation that could and should have done more to save millions, and facilitate justice rather than deliberately foil it.

If there is a lesson in this portrait of an appalling Nazi couple, their evasive, apologist progeny, and the long list of accomplices, it is that Hannah Arendt was right: evil is often disguised in banality.

The book feints into more interesting territory in its too brief coverage of Rome’s ratline links from 1946 to 1949. The Americans knew Wächter’s whereabouts from the moment he came into the Vatican’s orbit, because Hudal was a paid informant within a spy ring reporting to key CIA figures. For $50 a month the bishop participated in a cynical collaboration designed to protect evildoers on the premise that communism was the new threat to the Church and the West.

This is the final link in a long evidential chain proving that Wächter was an unrepentant mass murderer, was not assassinated but instead died through his own stupidity, and — outwitted by his former enemies — was a fool to the end.

There are tinges of Frederick Forsyth’s novel The Odessa File, the 1974 film adaptation of which triggered the exposure of Eduard Roschmann, the Butcher of Riga, living in Argentina. Sands even consulted his neighbour, Cold War spy and master novelist John le Carré, on various points of intrigue. But there is no suspense in the story, the circumstances surrounding Wächter’s death are a contrived narrative thread, and a significant part of the book ends up as a red herring.

As is the title: Wächter never made it onto the ratline, and Sands unveils almost nothing about the construct or destinations of these escape channels.

Irrespective, the satisfying outcome is that Wächter did not manage to escape, and the best line in the book is its last, his granddaughter’s unequivocal acknowledgment: "My grandfather was a mass murderer."

Ultimately, The Ratline is a meandering biography only partly about a man who deserved his painful demise. That he lived in terrible times was a tragedy for millions of others.

The secret life of books

A story unfolds and it’s not on the pages — it’s about the pages, writes Luke Alfred
Life
7 months ago
Next Article

BOOKS: What to read now

BOOK REVIEW: Dance of the Trillions

BOOKS: What to read now

BOOK REVIEW: Dance of the Trillions

Making a clean break from coal is far from easy, as ...