If we’re closer to a situation of more widespread immunity than we think, it would provide impetus for a faster easing of the suffocating lockdown 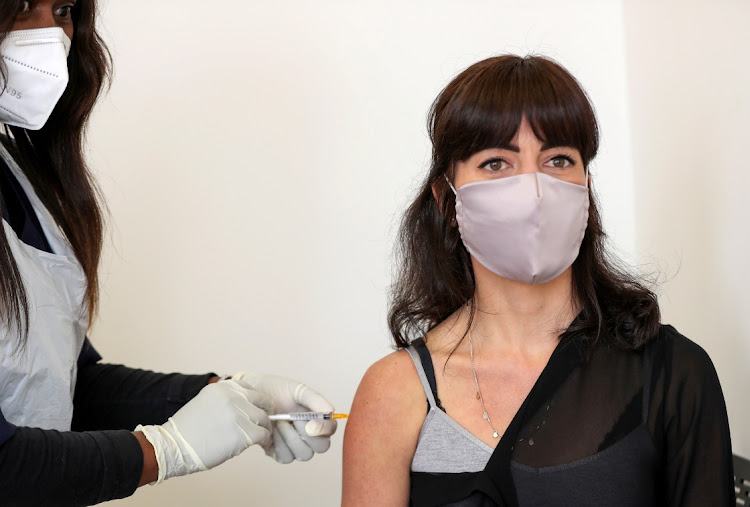 Robyn Porteous, a vaccine trials' volunteer, is injected with a vaccine as part of the country's human clinical trial for potential vaccines after being tested for Covid-19 at the Wits RHI Shandukani Research Centre in Johannesburg. Picture: REUTERS/Siphiwe Sibeko

“Between 35% and 40% of South Africans have been infected by this virus,” said Wits University professor Shabir Madhi on a Daily Maverick webinar with Mark Heywood on Sunday night.

It’s a fascinating view, since this would imply that Covid-19 has infected between 15-million and 20-million South Africans — multiples more than the “official” number of confirmed cases which, by Sunday night, sat at 649,793.

If it’s true that the official numbers are so wildly wrong, it’s enough to make you wonder about the real value of the infection statistics health minister Zweli Mkhize so reliably dishes out to the public every night.

Madhi says he has a number of reasons for pitching his estimate so high: for one thing, between 40% and 60% of people who contract Covid-19 are asymptomatic, while many others who only have mild symptoms don’t bother getting tested.

That this view comes from Madhi is significant, since he’s a member of the ministerial advisory committee (MAC), which advises Mkhize and the government on its Covid-19 response. And, if we’re closer to a situation of more widespread immunity than we think, it would provide impetus for a faster easing of the suffocating lockdown.

Other experts agree. On July 24 for example, SA’s “official” confirmed infections clocked in at 13,944 cases — yet the Institute for Health Metrics & Evaluation, a US research centre, estimated the true number of infections that day to be 78,991.

Madhi’s assessment also underscores the view of Discovery Health CEO Ryan Noach, who said last week in a presentation that his company “estimates that approximately 13-million South Africans have been infected”.

Interviewed by BizNews’s Alec Hogg, Noach said those 13-million people are most likely in metropolitan areas where, he reckons, up to 50% of the population may have been infected.

“In Khayelitsha, there were up to 50% positive antibodies in the people at their clinic. We may be getting close to herd immunity, which the epidemiologists claim is at 60%,” he said.

But if, by Madhi’s reasoning, we’ve had far more infections than anyone suspected, why hasn’t that translated into far more Covid-19 deaths?

Madhi says there are a couple of theories. “The one I favour is that there was a possibility of some sort of underpinning immunity [which] was present in South Africans, possibly because of some sort of previous exposure to common cold coronaviruses,” he says.

Another theory is that masks, while not 100% effective, would have helped. “We don’t know which of those reasons contributed,” he said.

Many of these deaths weren’t classified as Covid-19 deaths for whatever reason. As Noach explained, many deaths classified as “natural causes” were “completely out of the usual trend of deaths by natural causes. When you look at the graph, you see the spike of natural deaths at the time that the Covid epidemic peaks.”

For a more in-depth discussion of these “excess deaths”, and how these numbers can be reconciled, read Kyle Cowan’s analysis in News24.

Still, whichever way you look at it, the numbers are going in the right direction.

On Sunday, SA had just 20 deaths — the lowest since May, and far below the record of 572 fatalities on July 22.

There are some intriguing theories on “herd immunity” going around, even if Madhi thinks it’s too early to suggest SA has reached that stage just yet.

In this article in Stat News, expert health reporter Helen Branswell outlines four ways in which people could develop immunity to Covid-19.

Branswell writes: “If these experts are correct, and the worst-case scenario is off the table, humans can expect to see a waning of the threat [that Covid-19] poses to people over time. Our immune systems will know how to deal with it. It could become the fifth human coronavirus to cause common colds.”

Which isn’t really a bad outcome, if you consider the dystopian future predicted in March, in which Covid-19 was almost depicted as the globe’s sixth extinction-level event.

In retrospect, it also makes SA’s hard lockdown — with its alcohol prohibition and cigarette ban — look like an epic overreaction.

Noach last week said Discovery reckoned about 30% more people would ultimately have died from Covid-19 but for the lockdown. Still, he said, saving these lives came at an immense economic cost.

“It is a huge price to pay and only history will tell us what could have been done differently, in order to still achieve great clinical outcomes and potentially, protect the economy,” he says.

Danie Matthee, CEO of Outsurance, is reaping the benefit of paying out claims for Covid-19’s lockdown, while many of his rivals run for cover
Opinion
8 months ago

Don’t believe the politicians – doctors didn’t suggest that kids not go back to school and taxis fill up. No wonder the medical advice is being kept ...
Opinion
9 months ago