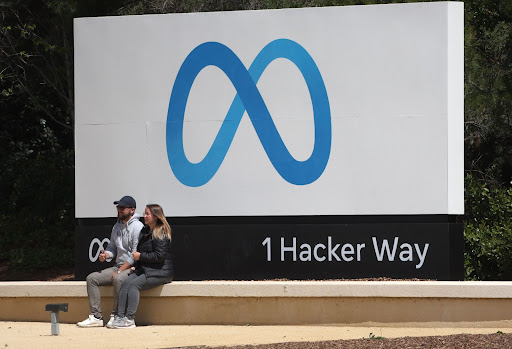 A sign is posted in front of Meta headquarters on April 28 2022 in Menlo Park, California. Picture: GETTY IMAGES/JUSTIN SULLIVAN

Over the past three weeks we’ve seen some of our favourite names — Amazon, Google, Meta, even Nike — down about 30% year to date, on average. But in the case of Facebook it’s the same ultra-profitable business it was two years ago, and it has also increased its R&D efforts to find the next growth spurt. You’ve seen other highly popular businesses — for example,  Beyond Meat — get smashed. But Beyond Meat has gross margins of 0.2% and a business that is making profits and a business that isn’t, aren’t to be traded in the same way. We can draw comparisons for tech companies that were left for dead — think of Apple, in 2016. Then Apple was trading on a p:e of less than 8,  like a beaten-down oil stock. But you couldn’t compare Apple to an oil stock: there was no slowdown in demand for any of their gadgets. A slowdown in growth is not negative growth. You fast-forward a few years and you’ve enjoyed five times returns and a fat dividend in between. So, Meta, for example, is arguably cheaper than a cigarette stock, which makes no sense whatsoever.

The sell list is an easy one — there is a whole host of meme stonks. When you talk about growth companies they promise profits in the future. These don’t  promise future profits but future revenues — big difference. A perfect example is Virgin Galactic (or Palantir, Tilray, Nokia, Robinhood and Blackberry). If I were a short seller I’d still be shorting them because there are still no revenues.

BROKERS’ NOTES: Buy into semiconductors, sell out of travel

What the smart money is doing
Money & Investing
1 month ago

BROKERS’ NOTES: Buy this CoreShares ETF, sell this Satrix one

Nerina Visser, independent exchange traded funds strategist and adviser, on what to buy and sell
Money & Investing
1 month ago

Petri Redelinghuys, trader and founder of Herenya Capital Advisors, on what to buy and sell
Money & Investing
2 months ago

Andrew Joannou, portfolio manager at Ninety One on what to buy and sell
Money & Investing
2 months ago
Next Article