Six cosmic catastrophes that could wipe out planet earth 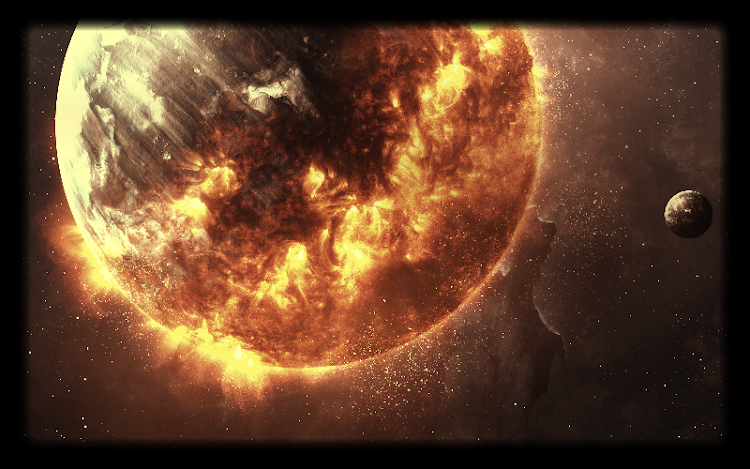 If you ask yourself what the biggest threat to human existence is you’d probably think of nuclear war, global warming or a large-scale pandemic disease. But assuming we can overcome such challenges, are we really safe?

Living on our blue little planet seems safe until you are aware of what lurks in space. The following cosmic disasters are just a few ways humanity could be severely endangered or even wiped out. Happy reading!

1. High energy solar flare
Our sun is not as peaceful a star as one might initially think. It creates strong magnetic fields that generate impressive sun spots, sometimes many times larger than Earth. It also ejects a stream of particles and radiation – the solar wind. If kept in check by Earth’s magnetic field, this wind can cause beautiful northern and southern lights. But when it becomes stronger, it can also influence radio communication or cause power outages.

The most powerful magnetic solar storm documented hit Earth in 1859. The incident, called the Carrington Event, caused huge interference with rather small scale electronic equipment. Such events must have happened several times in the past, too, with humans surviving.

But only in recent years have we become entirely dependent on electronic equipment. The truth is we would suffer greatly if we underestimate the dangers of a possible Carrington or even more powerful event. Even though this would not wipe out humanity instantly, it would represent an immense challenge. There would be no electricity, heating, air conditioning, GPS or internet – food and medicines would go bad.

2. Asteroid impact
We are now well aware of the dangers asteroids could pose to humanity – they are, after all, thought to have contributed to the extinction of the dinosaurs. Recent research has made us aware of the large host of space rocks in our solar system that could pose danger.

We are at the starting point of envisaging and developing systems for protecting us against some of the smaller asteroids that could strike us. But against the bigger and rarer ones we are quite helpless. While they would not always destroy Earth or even make it uninhabitable, they could wipe out humanity by causing enormous tsunamis, fires and other natural disasters.

3. Expanding sun
Where the previous cosmic dangers occur at the roll of a dice with a given probability, we know for certain that our sun will end its life in 7.72 billion years. At this point, it will throw off its outer atmosphere to form a planetary nebula, ending up as a stellar remnant know as a “white dwarf”.

But humanity will not experience these final stages. As the sun becomes older, it will become cooler and larger. By the time it becomes a stellar giant it will be big enough to engulf both Mercury and Venus. Earth might seem safe at this point, but the sun will also create an extremely strong solar wind that will slow down the Earth. As a result, in about 7.59 billion years, our planet will spiral into the outer layers of the hugely expanded dying star and melt away forever.

4. Local gamma ray burst
Extremely powerful outbursts of energy called gamma ray bursts can be caused by binary star systems (two stars orbiting a common centre) and supernovas (exploding stars). These energy bursts are extremely powerful because they focus their energy into a narrow beam lasting no longer than seconds or minutes. The resulting radiation from one could damage and destroy our ozone layer, leaving life vulnerable to the sun’s harsh UV radiation.

Astronomers have discovered a star system – WR 104 – that could host such an event. WR 104 is about 5,200-7,500 light years away, which is not far enough to be safe. And we can only guess when the burst will happen. Luckily, there is the possibility that the beam could miss us entirely when it does.

5. Nearby supernovas
Supernova explosions, which take place when a star has reached the end of its life, occur on average once or twice every 100 years in our Milky Way. They are more likely to occur closer to the dense centre of the Milky Way and we are about two-thirds of the way from the middle – not too bad.

So can we expect a nearby supernova anytime soon? The star Betelgeuse – a red super giant nearing the end of its life – in the constellation of Orion is just 460-650 light years away. It could become a supernova now or in the next million years. Luckily, astronomers have estimated that a supernova would need to be within at least 50 light years of us for its radiation to damage our ozone layer. So it seems this particular star shouldn’t be too much of a concern.

Meanwhile, a wandering star on its path through the Milky Way might come so close to our sun that it would interact with the rocky “Oort cloud” at the edge of the solar system, which is the source of our comets. This might lead to an increased chance of a huge comet hurtling to Earth. Another roll of the dice.

The sun itself follows a path through the Milky Way that takes us through more or less dense patches of interstellar gas. Currently we are within a less dense bubble created by a supernova. The sun’s wind and solar magnetic field help create a bubble-like region surrounding our solar system – the heliosphere – which shields us from interacting with the interstellar medium. When we leave this region in 20,000 to 50,000 years (depending on current observations and models), our heliosphere could be less effective, exposing Earth. We would possibly encounter increased climate change making life more challenging for humanity – if not impossible.

And life goes on…
The end of humanity on Earth is a given. But this is not something to make us crawl under a table. It is something that we cannot change, similar to our lives having a definite start and end. This is what defines us and makes us realise that the only thing we can do is make the most of our time on Earth. Especially when we know that Earth needs a careful balance to sustain humanity.

All the above scenarios harbour possible destruction, but in every instance they also offer beauty and wonder. In many cases, they produce what allowed us to be created. So rather than looking into the night sky and wondering what will kill us next, we should marvel at the depth of space, the wonders therein and the sublime nature of the universe. Be inspired by space. It offers future and meaning.

This article first appeared in The Conversation

Zuma, the Guptas and the Russians — the inside story

1.
The tough life of an Apple supplier
Science & Technology

1.
The tough life of an Apple supplier
Science & Technology