RAZINA MUNSHI: Protest in a time of coronavirus

Before the coronavirus stopped the world in its tracks, 2019 was dubbed ‘the year of the protest’ 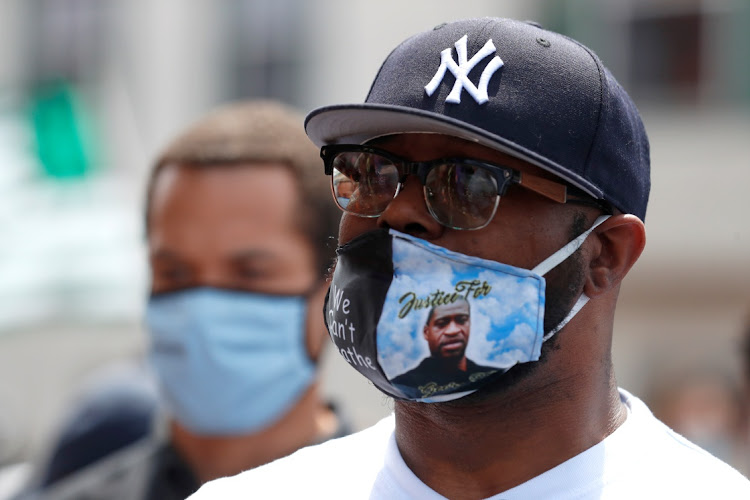 Terrence Floyd, brother of George Floyd, is pictured as he visits a makeshift memorial honouring George Floyd, at the spot where he was taken into custody, in Minneapolis, Minnesota. Picture: REUTERS/Lucas Jackson

The coronavirus outbreak is already reshaping how people protest.

In the middle of a public health emergency, attending a conventional rally seems like a risk many people would not be prepared to take.

And a politician – the energy minister in Alberta, Canada – recently saw this as a window of opportunity.

When asked last week during a podcast with oil contractors about the progress of a pipeline under construction between Edmonton and Vancouver, minister Sonya Savage had this to say: “Now is a great time to be building a pipeline, because you can’t have protests of more than 15 people. Let’s get it built.”

The interviewer laughed. But Savage did not.

Some other officials displayed a similar attitude. In April, as an explanation for breaking up a protest, the police department in Raleigh, North Carolina, in the US tweeted: “Protesting is a nonessential activity,” prompting a barrage of criticism from free speech campaigners.

Also in April, the California Highway Patrol responded to a gathering to protest against the state’s stay-at-home order by indefinitely banning in-person demonstrations at state facilities, ignoring the constitutionally protected status of public protests.

In New York, protesters who were wearing masks and meeting social distancing requirements were arrested or issued with summonses. New York’s police commissioner Dermot Shea said last month: “While we greatly, greatly respect the right of people to protest, there should not be protests taking place in the middle of a pandemic.”

The epidemic has even managed to end sustained national protest movements. In Delhi, police broke up the longest-running protest against Prime Minister Narendra Modi’s citizenship law in March, citing a Covid-19 ban on public gatherings. The protesters had become a thorn in Modi’s side, and the police action follows a number of calls by right-wing groups to clear out the demonstrators.

And in Hong Kong, regulations banning gatherings were used in March to crack down on political dissent. Seven months of protests came to an end. And when social distancing rules were relaxed in May, police mostly stayed away from the city’s packed bars. Instead, they aggressively enforced a restriction on gatherings of more than eight people at fresh pro-democracy protests.

However, even as countries use Covid-19 as a pretext for quashing dissent, new protests have arisen that were directly related to the virus.

From SA to Malawi, the US and Spain, health workers have gathered to protest against inadequate protective equipment. The response has sometimes been abysmal. In Pakistan doctors were beaten and arrested for protesting against the near absence of protective gear.

Residents of cities in Brazil and Colombia have banged pots and pans from their windows to demonstrate their unhappiness with their government’s response to the coronavirus.

In Cape Town, workers at a Checkers store in Rylands protested against the inadequate safety measures in place to protect them from Covid-19 after a number of their colleagues were infected. In the end the store was forced to shut its doors.

More recently parents in the city have also protested against the reopening of schools after restrictions on movement were eased.

But as the authorities crack down, protesters are becoming smarter. Virtual rallies are now booming, while in Brazil, Poland and Lebanon people are using drive-by protests or convoys of cars to make their point.

Physical distancing is being factored in too. In April thousands of people gathered in a Tel Aviv square to object to the policies of Benjamin Netanyahu. To comply with the rules, the protestors wore masks and stood 2m apart, in almost perfect geometric patterns.

Before the coronavirus stopped the world in its tracks, 2019 was dubbed “the year of the protest”. Aside from the rise of pro-democracy protests and grassroots movements in a few countries, millions of people around the world took to the streets in 114 countries, according to lobby group Centre for Strategic & International Studies. It says that during the past decade the number of protests increased globally at an annual rate of 11.5%.

But it’s the US that became a hotspot for violent protests this week.

The outpouring of outrage and grief following the killing by a police officer of George Floyd in Minneapolis has led to more than a dozen cities imposing curfews. Governors of six states went so far as to call in the national guard.

Since Floyd’s death, more than 4,100 protesters have been arrested, and police have been accused of attacking protesters and journalists. As a result solidarity rallies have taken place in other cities around the world, in open defiance of rules designed to limit the number of people at a gathering.

This has shown that protesters aren’t simply going to wait for the pandemic to end to make their point.

The New York Times writes about the “parallel plagues” ravaging the US: the coronavirus and police killings of black men and women.

The newspaper quotes pastor Jia Starr Brown of a church in Minneapolis, who said she is encouraged to see so many people attending rallies calling for justice for Floyd, despite the risk. “This is about collective widespread grief, and how great must the grief be that people would risk their livelihoods?”

The Atlantic writes about a president who is terrified of protest. Between the coronavirus and the protests, the White House has come to resemble a fortress. The publication says US president Donald Trump has made known his disdain for protests that target him or his record. He views them through a simple lens: as provocations that must be put down with unyielding force. Less important, it seems, are the grievances that give rise to the demonstrations in the first place.

Also in The Atlantic Kellie Carter Jackson writes about the double standards of the American riot. Throughout history, black people have employed violence, nonviolence, marches, and boycotts. “Only one thing is clear – there is no form of black protest that white supremacy will sanction,” she says. The philosophy of force and violence to obtain freedom has long been employed by white people and explicitly denied to black Americans, she argues.

People have asked if violence is a valid means of producing social change. Her response: yes.

RAZINA MUNSHI: In a pandemic, housing is a matter of life and death

Covid-19 is showing up, once again, the absolute failure of this government to secure housing for its people
Opinion
11 months ago

Premier Alan Winde’s call for the province to be moved to level 3 of lockdown is a risky strategy. Can it really reopen parts of its economy when it ...
Opinion
11 months ago

Is the prevention paradox a useful reference to counter voices that suggest the prevention is more harmful than the disease itself?
Opinion
1 year ago
Next Article

TOBY SHAPSHAK: Be brave, a new world is dawning

Disinformation in the time of Covid

TOBY SHAPSHAK: Be brave, a new world is dawning

Disinformation in the time of Covid

HILARY JOFFE: Tax is at the heart of the ...