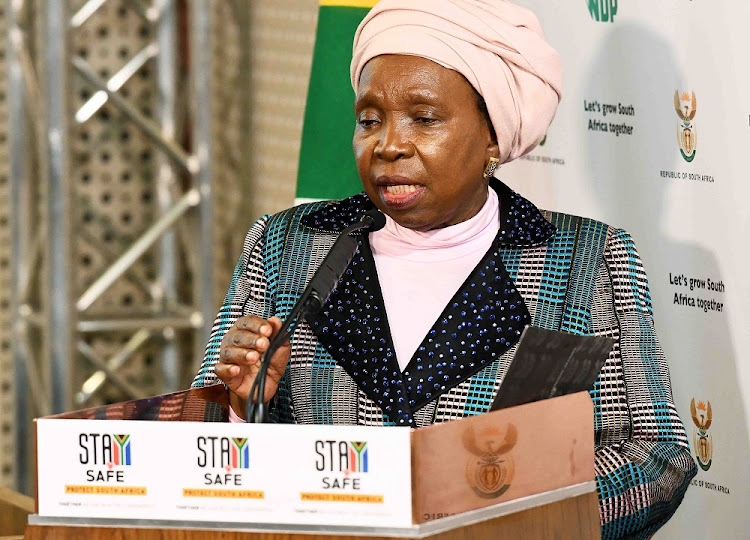 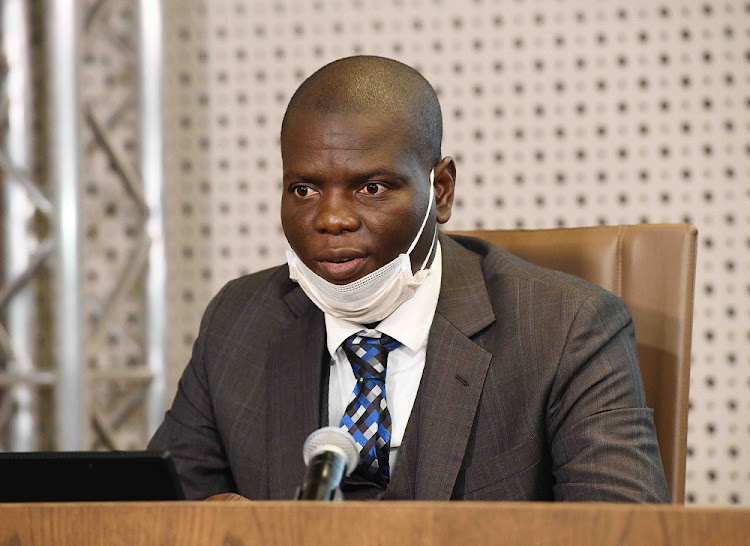 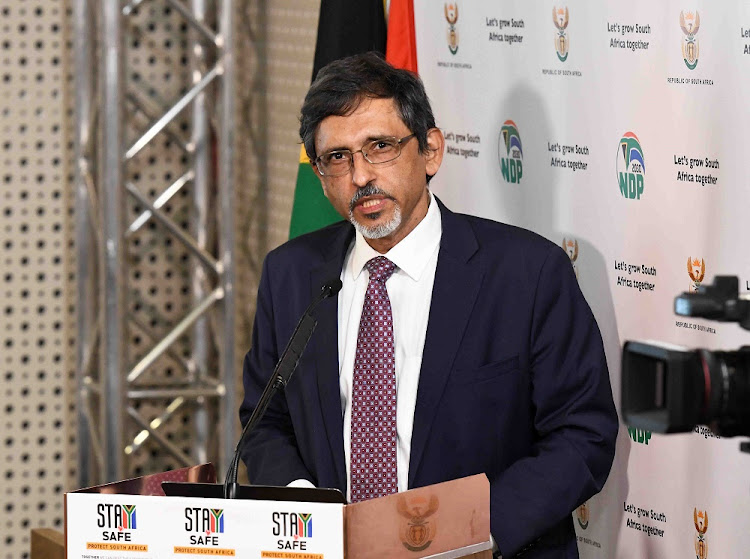 Five years ago, on May 28 2015, South Africans took in the ludicrous scene of firefighters demonstrating the utility of a firepool – in slow motion and to the dulcet sounds of ’O Sole Mio.

You couldn’t help but feel a twinge of sympathy for then police minister Nathi Nhleko as he sweated through the ignominy of trying to explain away why public money was spent on upgrading Jacob Zuma’s Nkandla homestead.

It was a feat of absurdity that came to mind on Thursday, when members of the national command council (NCC) stepped up to announce the regulations we will live under come Monday, when the country moves to level 3 lockdown.

We were told that “the peak of the [Covid-19] curve remains in the horizon” and that we must “redouble our efforts so as to further contain and prevent deaths”, and “maintain the delicate balancing act between saving the lives and livelihoods of South Africans”.

We were told how greatly the government benefited from the inputs “of various experts and scientists”, but that we should beware of “the ever-present danger of reversing the gains we have thus far recorded”.

Critically, co-operative governance & traditional affairs minister Nkosazana Dlamini Zuma told us that “our lived experiences have shown funerals as high Covid-19 transmission vessels. Consequently, we will continue to limit the number of funeral attendees to 50.”

Oh, and religious gatherings will definitely be joining adult underwear in the ranks of essential goods and services, provided fewer than 50 people are involved.

If ever there were ever a time for the NCC to override a presidential announcement, this may have been it. But no. Instead, we got to watch the council – and minister in the presidency Jackson Mthembu in particular – attempt to tap-dance their way through the abject irrationality of it all.

First: if funerals have been shown to be major spreaders of Covid-19, then the logical response would be to rethink how they are conducted – awful as the thought is – as has been done in other countries.

But no. Instead, we’re doubling down.

As Mthembu explained in a fit of logic: “We have agreed that funerals will be [capped] at 50 people. And as you know, funerals normally start in these houses of worship … The argument by churches was that if you have allowed 50 already, does it make any sense or is it rational to disallow churches if they maintain the 50?”

Besides, he kept reiterating, there will be hand washing, the wearing of masks, the magic of social distancing. All will be fine.

Though, god knows why the miracle triumvirate of hand washing, mask-wearing and a 1.5m distance will protect only the religious, and not those who venture into the public domain elsewhere by climbing a mountain in Cape Town, for example, or walking in a park.

As for accusations that the government is “sending people to the slaughterhouse” by allowing religious gatherings, Dlamini Zuma said: “No-one is forced to go to church.”

Well, yes. And thankfully some religious institutions have themselves already indicated that they won’t be opening their doors just yet.

But there’s a cynical irony in the government telling us people should be empowered to make their own decisions about their health and safety. This is, after all, the same government which has prevented individuals from making decisions about smoking, and – until the regulations ease on Monday – drinking alcohol, or from buying a T-shirt that’s not “an undergarment for warmth”.

This is not to say that what came out of the briefing was all bad.

Much of it was sensible, with the whiff of real consultation about it. For example, the decision to extend the regulations around selling liquor for off-premises consumption to on-premises licence-holders such as taverns and restaurants. This will go a small way to keeping some of these outfits in business. (Though why the Monday to Thursday, 9am-5pm sales restriction applies equally to online liquor sales remains unfathomable.)

The curfew will also be lifted; we can pick up our own takeaways; domestic workers will be returning to their jobs, as will public servants; limited domestic air travel will be allowed for business; and hotels and lodges will be permitted to offer accommodation for business travellers.

In fact, given the government’s newfound enthusiasm for economic activity, there’s not much left on the original level 2 list. Tobacco, perhaps.

At least we’re making some headway in finding the balance between lives and livelihoods – because that’s where the focus needs to lie now.

It’s not an easy course to plot; governments around the world are figuring out the rules as they go along – and retreating back to the protective walls of lockdown when they get them wrong.

For example, South Korea, an exemplar of containment, has just reimposed a strict lockdown in the capital as it tries to determine where a spike in new Covid-19 infections has come from. (Here’s an in-depth piece from The Guardian on the resurgence of the virus in the country.)

Some of those infections have been traced to clubs and bars in the Itaewon district of Seoul and an e-commerce distribution centre that reportedly didn’t adhere to health regulations.

It’s a stark reminder, on the one hand, about obeying the rules (wear the damned face mask), and on the other, that life will not return to normal for the foreseeable future – and we need to find ways to adjust to that.

Perhaps we need to get creative about the ways in which we live – as this piece by Derek Thompson in The Atlantic makes clear. It’s about how we Covid-proof our lives so that we feel safe being indoors again.

Thompson makes the pertinent point that major spreading events have happened indoors – an academic paper out of China (not yet peer-reviewed) found only one case of an outbreak from outdoor contagion among 7,324 documented cases.

I particularly like the idea of increasing pedestrian spaces for restaurants – dedicating strips like Parkhurst in Joburg or Grant Avenue in Norwood to foot traffic only, so that restaurants can spill out into the open space with an increased spacing between tables.

It’s a worthwhile read that will make you rethink sitting anywhere near an airconditioner. And wonder again at government’s stubborn insistence at keeping our large public parks closed.

The value of trust

Two recent New Yorker articles offer additional advice around how we re-enter our new normal. In the first, surgeon and public health researcher Atul Gawande asks: “Is there any place that has figured out a way to open and have employees work safely, with one another and with their customers? Well, yes: in health care.”

Drawing lessons from the health-care sector and the hospital in which he works, Gawande offers us some ideas about playing it safe. In short, it’s Jackson Mthembu’s miracle triumvirate – hygiene, distancing, masks – with screening on top.

But Gawande offers granular detail on each – how it works, where the pitfalls lie. It is, he warns, “like a drug cocktail … Skip one, and the treatment won’t work”.

The second is this Q&A with US primary care physician and public health researcher Asaf Bitton. It’s a very practical take on how social distancing norms have developed, the increased move towards the outdoors, and the levels of risk involved in everyday activities such as getting your hair cut, or using a public restroom, or exercising with a mask (you should).

Importantly, he argues that reopening businesses is about trust – businesses need to show that they can be trusted to secure the health of their workers and the general public. It’s an appeal to the kind of responsibility that the government is urging us to take as we move to level 3.

Equally, however, success depends on us trusting our government. Which is why we can’t afford another rash of irrational regulations.

Already, anger at government has driven Joburg’s affluent northern suburbs to fit of foot-stamping pique. As anger has risen, so face masks and social distancing are slipping. It’s a knee-jerk immaturity we can ill afford.

As a World Food Programme expert warns of ‘catastrophic’ hunger, Covid-19 is shining a light on the inefficiencies of our food supply systems – and ...
Opinion
5 months ago

Ebrahim Patel finally lifted the prohibition on e-commerce (as long as nobody delivers booze or cigarettes). Which is just as well, since that ban ...
Opinion
5 months ago

SHIRLEY DE VILLIERS: The curious case of cabinet and the national command council

Very real concerns have been raised about what ‘rule by command council’ means for constitutionality, accountability and the exercise of power
Opinion
5 months ago
Next Article

KHAYA SITHOLE: Does Nkosazana Dlamini-Zuma have 3,500 reasons to ban tobacco?

KHAYA SITHOLE: Does Nkosazana Dlamini-Zuma have 3,500 reasons to ban tobacco?

African Bank is set to shed 10% of staff

SA on one-way ride to a debt crisis, warns Michael ...

Rand may retreat from one-month high as investors ...

PETER BRUCE: Covid round two. I’ll wear a mask but the ...

STEVEN FRIEDMAN: Growth will remain elusive unless the ...