Anglo American is moving its HQ from the Joburg CBD to Rosebank. Heritage architect Brian McKechnie looks at the significance of this move and the building it’s leaving behind 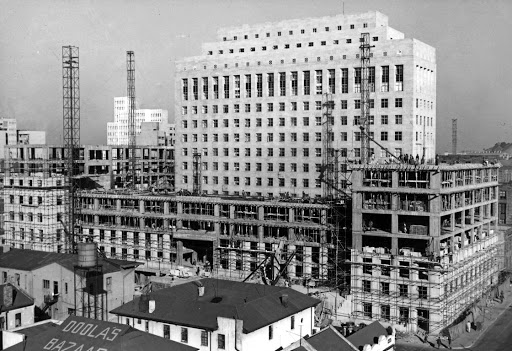 Change is an urban constant. Buildings and businesses come and go. Cities rise and fall. Anglo American’s move to Rosebank in 2021 is no exception in that regard. However, while the mining giant’s resettlement provides fresh opportunity for the city and the company, it still hurts to witness the downtown departure of a grand Joburg mining institution, synonymous with 44 Main and the golden metropolis. An SA legend, relegated to a generic corporate name plaque, backlit on the tenant board of a soulless glass box in the suburbs.

At the turn of the previous century, the situation was very different. Rosebank was practically "out in the country" and the growing city of Joburg was where it was at. Marshallstown was at its centre. Named after pioneering industrialist HB Marshall, it encompasses the well-managed southwestern mining and financial district of downtown Joburg. Marshall’s obituary in The Rand Daily Mail of July 23 1947 notes that the area quickly became the city’s financial centre, home to institutions such as the Rand Club, the stock exchange and Anglo American. The city grew rapidly as businesses flocked to stake their claim above the richest goldfield in the world. For a season, Joburg was Africa’s very own New York.

In the late 1980s, global trends towards decentralisation, coupled with political instability, rising crime, poor public policy and short-sighted city planning, spurred an exodus of business from the CBD. 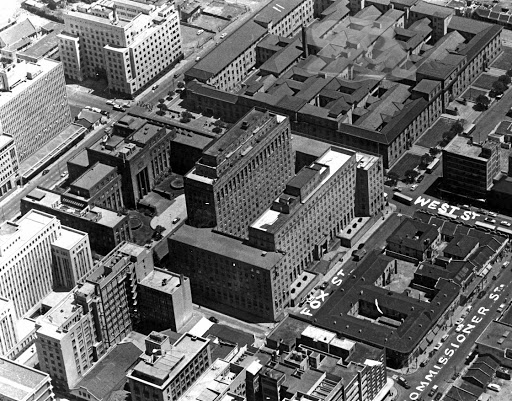 Joburg was quick to join the reinvention party — a proper millennial comeback kid. The CBD sought to shed the perception of crime and grime, promoting itself as a dynamic, central, accessible, pedestrian-orientated node. The area is rich in history, diverse in cultural appeal and equipped with robust infrastructure, the perfect recipe to attract high-density retail, residential and commercial redevelopment.

Large-scale public projects, like the construction of Nelson Mandela Bridge, the rejuvenation of Newtown and the transformation of the Constitution Hill precinct began to restore faith in the CBD. Private sector reinvestment followed suit, with the adaptive reuse of Turbine Hall, upgrades in the mining and banking districts, as well as multiple housing conversions slowly restoring some of the lustre of the City of Gold. 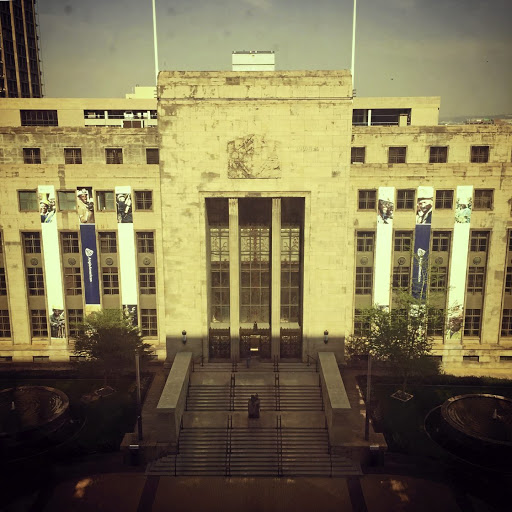 Another successful revitalisation initiative, Main Street Mall, forms a leafy, pedestrian-orientated east-west artery, meandering through the southwestern mining and financial district described in Marshall’s obit. The mall houses coffee shops and pavement cafés, as well as the Minerals Council SA and several city and provincial government departments. Diverse functions along the street ensure pedestrian activity and movement, creating a sustainable node, made safe through use, rather than access controls, booms or electric fencing.

The start of it all

For 84 years the blue-chip mining district anchor has remained 44 Main Street. Anglo American’s continued presence at this address has greatly contributed to the area’s stability. The wholesale exit of Anglo would devastate the city centre.

Designed in 1936, the year of Joburg’s jubilee, Anglo’s 44 Main head office followed the lines of public buildings fashionable in London and other world capitals at the time. Classical design forms and proportions fuse elegantly in this stately, stripped-down neoclassical corporate edifice. The building masterfully adapts design cues from the League of Nations in Geneva to its Joburg locale. The elegant H-plan structure, with golden Ficksburg sandstone façades, draws comparison to the US Federal Reserve in Washington, as well as Mussolini’s public buildings in Rome. 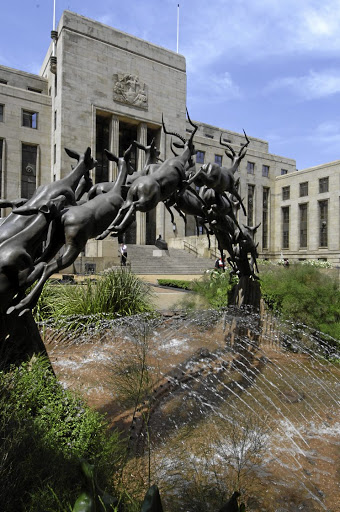 The Impala Stampede: The sculpture by Herman Wald originally sat in Oppenheimer Park but was saved and repositioned outside the Anglo American HQ

In his book Johannesburg Style, the architectural historian Clive Chipkin outlines the project brief from director Harry Oppenheimer: "[He] felt the need for a certain type of impressive external appearance … a neutral aesthetic attitude that would last." And it has. A quietly assured and steadfast presence in the city, the building spans an entire block, unencumbered by other, less dignified neighbours. The monumental horizontal pile shuns 1930s Joburg’s crass obsession with height. As heritage doyenne Flo Bird points out: "Anglo didn’t follow prevailing trends, it set them."

44 Main acknowledges Anglo’s important place within the urban fabric of Joburg. Intersecting office wings hug generous pockets of greenery and public fountains, decorated with friezes of fish and mystical aquatic creatures. Pedestrian access and connection to the surrounding city are acknowledged in a way seldom seen in contemporary SA architecture. The building is set back on its central axis, creating provision for a widened pavement and a grand flight of stairs up to the main entrance portico. Intricately detailed bronze entrance doors are the work of Walter Gilbert, the same artisan responsible for the gates of Buckingham Palace. A triple-storey glazed Art Deco screen by Jan Juta allows refracted sunlight to penetrate the lobby within.

The building is adorned with relief panels in a similar vein to 30 Rockefeller Plaza in New York. The works depict Anglo’s mining history, and the company’s roots on the continent, including an array of indigenous African fauna and flora. A central figure above the grand entrance pulls lightning bolts from the skies, symbolising the energy of human ambition, breaking ground with electric power and revealing the bountiful treasures concealed beneath the surface. 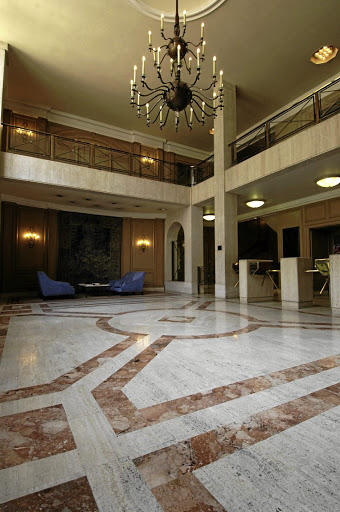 Chipkin notes: "This low building, unnamed with English reticence, is the seat of finance capital in SA and no signage is needed to inform you of this."

The campus is connected by pedestrianised streets, planted with trees and greenery and enlivened through fountains and public artworks by celebrated SA artists, including Herman Wald and Dylan Lewis. This Park Avenue-like green lung not only benefits the mining and financial district, but provides an important outdoor amenity for downtown Joburg’s residents, workers, pedestrians and visitors.

Last week Anglo American announced a planned 2021 shift of its head office from this precinct to the decentralised Rosebank node. A press statement outlining the move explains that the company "has been exploring options to bring all of its SA corporate offices together in one location to support its future workplace strategy — which is based on creating a workplace that is safe, smart and collaborative".

The City of Joburg must heed the dire warning of another blue-chip institution’s exit from the CBD and urgently address critical urban management and public safety failings, especially in the downtown area. 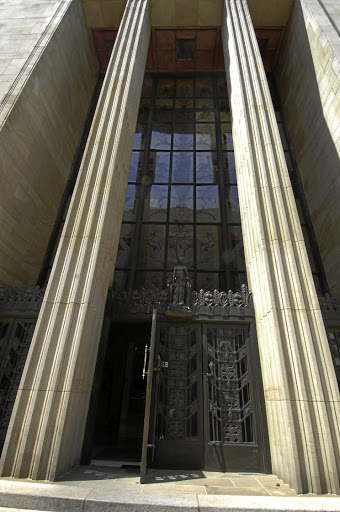 Cities and organisations share a common dynamism in their DNA, they depend on perpetual renewal and adaptation, and their sustained growth requires both organisational and physical freedom. And now, the Covid-19 pandemic has rapidly accelerated this institutional change. Fixed office space is becoming increasingly irrelevant, as smart workplaces shift away from rigid and expensive corporate office buildings, bound to single locations, in favour of plug-and-play environments, located anywhere in the world. This paradigm shift will fundamentally reshape 21st-century cities.

Sibusiso Tshabalala, Anglo American’s group external communications manager, points out that while the impending move may signal a change in the city, the company is certainly not "fleeing the CBD". Anglo’s press statement regarding the move reiterates this: "We are proud of our contribution to the Joburg CBD. While we’ve been here for many decades, it is critical for us to consider the need for modern infrastructure … We will refurbish and renovate our JHB campus, so that the buildings can support the development of the inner city — and build on our positive legacy in SA."

Anglo does not plan to dispose of its downtown buildings, and the move presents an opportunity to repurpose and reimagine the historic campus. Ideas already include the possibility of opening 44 Main to the public, showcasing the building’s interiors, as well as curated collections of Anglo’s SA artworks.

Discussions are under way with tertiary institutions about locating a postgraduate mining campus at 55 Marshall. Additionally, Anglo hopes that 45 Main will provide space for a business and entrepreneurial incubation hub. These and other new functions have been considered, not only to ensure the sustainable use and protection of Anglo’s buildings, but also to enhance the urban energy in the southwest of the city. The redevelopment is also perfectly positioned to plug into the renewed activity and urban vibrancy of FNB’s recently refurbished Bank City headquarters, northeast of the Anglo campus. 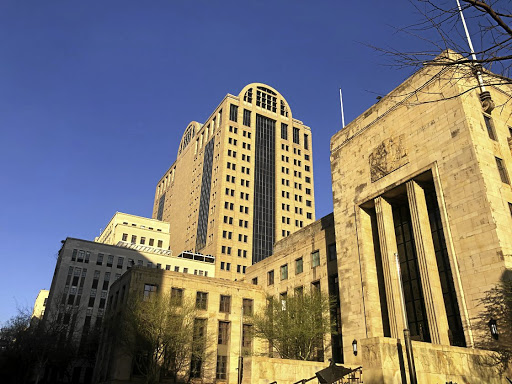 44 Main has inspired decades of admiration for its fine architectural execution, contextual connection and careful consideration of civic genius loci. Anglo’s new home at 144 Oxford, a dull brown mirror-glass office, has already garnered attention of another kind — included in the FM’s list of SA’s most unsightly architecture, which I compiled last year. While the building will allow Anglo to centralise and consolidate its departments and reduce its office space requirement, it bears little relationship to the surrounding context. It is, as I described it, "a visually dispiriting structure which adds nothing to the otherwise active, walkable, urban fabric that characterises Rosebank".

The company’s relocation signals the end of a formative chapter in the story of both the city and Anglo American; a chapter shaped between imposing neoclassical sandstone façades, framed by fountains and carefully tended greenery in downtown Joburg.

The company insists it remains fully committed to ensuring the sustainable protection of 44 Main, its legacy, and that beautiful precinct in the heart of the city. We shall wait and see.

1.
GETAWAYS: Joburg’s staycation on the hill
Life / Travel
2.
Is it a bird? Is it a plane? Is it a flying ...
Life / Books
3.
How technology has changed in 6 decades
Life
4.
The rise of the dark kitchen trend in SA
Life / Food

The Carlton Hotel: ghost of Joburg past

Architecture: Africa, your time is now

The Carlton Hotel: ghost of Joburg past

Architecture: Africa, your time is now

1.
GETAWAYS: Joburg’s staycation on the hill
Life / Travel
2.
Is it a bird? Is it a plane? Is it a flying ...
Life / Books
3.
How technology has changed in 6 decades
Life
4.
The rise of the dark kitchen trend in SA
Life / Food