We are not disposable, say health-care workers

The Gauteng health department’s budget has been slashed in half, resulting in nurses who worked through the pandemic sitting at home while 10,000 posts are vacant 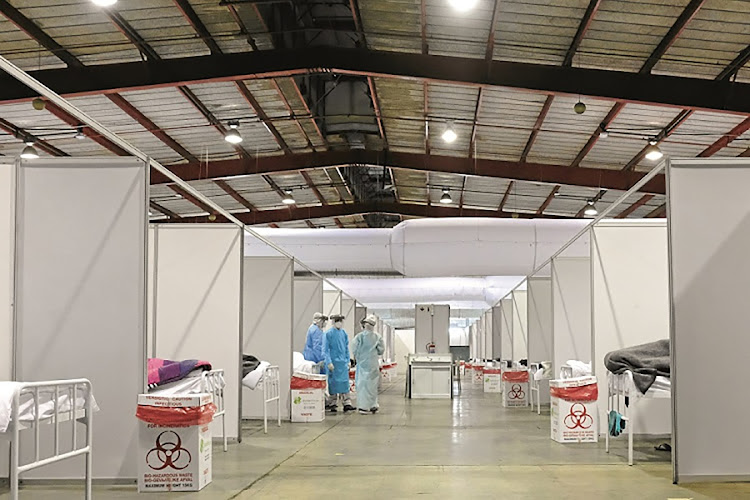 The Nasrec field hospital in Joburg opened in June 2020 and was shut down in February 2021. Picture: DINO LLOYD/GALLO IMAGES

The union, which represents nurses and health-care support staff in the public and private sectors, intervened to ensure that the government renewed some of the contracts of health-care workers who performed a vital service in Gauteng during the pandemic. “Under no circumstances will Ynitu allow the department of health to use and then discard health-care workers. We are not syringes, we don’t belong in sluice rooms.”

The Gauteng department of health renewed about 6,000 workers’ contracts after Ynitu intervened, but 2,500 are still without jobs. These are workers who were placed at district hospitals and clinics. Only tertiary and central hospital workers have got their jobs back.

Lebo Negukhula, a 43-year-old nurse from Dobsonville in Soweto whose contract was not renewed at the end of March, hopes she will be called back to work. She was employed in 2020 and worked at the Covid field hospital in Nasrec. “We risked our lives. It was not easy,” she says.

“In the beginning, we were scared. We had no idea what Covid was then, but because it’s our job to be nurses, we did go to Nasrec, we did nurse those patients and we worked until Nasrec closed last year.”

In the beginning, we were scared. We had no idea what Covid-19 was then, but because it’s our job to be nurses, we did go to Nasrec, we did nurse those patients and we worked until Nasrec closed last year

When the field hospital closed, the health-care workers were allocated to clinics according to where they lived. Negukhula says they did not ask what would happen to them when Nasrec closed. “They told us that we mustn’t worry because there are a lot of shortages in clinics, so we will continue working.

“We were surprised at the end of March when the department did not renew our contracts. However, those who worked at the bigger hospitals like Baragwanath have gone back to work. So it’s only us in district hospitals and clinics left outside,” she says.

“We will continue fighting until they take us back. This is not fair. Remember when Covid started, they were calling us heroes, but now they are throwing us away just like that.”

Ynitu president Rich Sicina says the union had been complaining about the shortage of staff, materials and resources even before the pandemic. “Then Covid happened and they employed many health-care professionals under Covid contracts. So now that they believe Covid is no longer rampant and killing people, they want to release them and they are citing a lack of budget.”

Sicina says the provincial health department was given an initial budget of R2.2bn. However, this year, it has been cut in half. “The treasury must release the budget. They can’t implement austerity measures against the department of health, a sector that deals with people’s lives.

“Go to any township — Katlehong, Krugersdorp, Soweto, Mamelodi — and many community members will tell you about treatment in our facilities. It’s a known secret that the department of health Gauteng is a complete mess.”

If there’s no cleaner, says Sicina, nurses have to clean because they can’t work in a dirty ward. Likewise, if there is no pharmacist, they find themselves dispensing medication. “The public health-care system says there are more than 10,000 vacant unfunded posts in the system. So all we are asking for is the treasury and the department of health to release the money and close those gaps … Make materials and human resources available.

“Suppose they are not listening to us and not responding accordingly, then we will go to the Union Buildings, to the president and parliament. Please [end] this gross staff shortage because it is killing our people.”

Mthunzi also wants the government to change how it deals with nurses’ education and placement. “The department trains the community service nurses but doesn’t employ them. So the purpose of training these health-care workers is because the government needs them in the system, but when they must be employed, the department claims that it does not have vacant funded posts,” she says.

Gauteng health department spokesperson Kwara Kekana acknowledges that austerity measures are affecting the department’s ability to keep on some of the health-care workers.

“The provincial department would have loved to retain all temporary Covid appointed staff. However, the current grant provided by the Gauteng provincial treasury to pay for compensation of temporary employees is inadequate to keep all workers in all regional and district hospitals,” Kekana says.

“The department has received a Covid budget amount of R2.2bn for compensation of employees to respond to the pandemic during the 2021/2022 financial year. This budget has since been reduced by 50% for the 2022/2023 financial year, hence it becomes a challenge to retain everyone.”

This article was first published by New Frame

There’s more money for Covid vaccines and Cuba-trained doctors, but wages for health-care staff are being curtailed
Special Reports
4 months ago