The case against the Tongaat executives 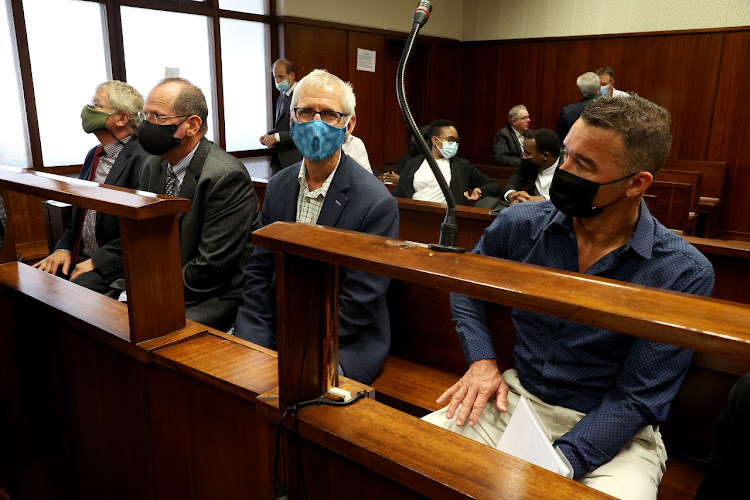 Kruger, who was a registered auditor and engagement partner at Deloitte, was also charged with contravention of the Auditing Profession Act.

According to the charge sheet, the accused had “actively associated themselves with the common purpose and worked together to misrepresent the true state of the revenue brought about by sales of land” by THD and “to falsify the financial records of THD and/or TH”.

The former executives, some in smart grey suits and ties, packed the dock in the full courtroom as their attorneys argued for bail of R25,000.

Magistrate Garth Davis said their bail applications of “thousands of words” would not be read in court to save time. He said the accused had shown themselves “helpful” to the investigation in that they had handed themselves over to the police and their affidavits showed they had no previous convictions or pending cases.

He granted the former executives and auditor bail of R30,000 on condition that they surrender their passports by February 11, with the exception of Wilkinson, who advised the court that he had travel commitments in March. He must surrender his passport by March 24.

Davis further ordered that they do not apply for new travel documentation and must get the permission of the investigating officer for any travel outside KwaZulu-Natal, providing a travel itinerary 48 hours beforehand.

He also warned them of the consequences of breaking their bail conditions.

“I must add that bail conditions are such that if they are breached there will be a responsibility on the accused to prove there was no occasion on their part,” he said.

Hawks spokesperson Simphiwe Mhlongo said the accused had been charged with fraud on Thursday morning.

“A case of fraud was reported at Durban North police station and the case docket was allocated to Hawks members from the Durban serious commercial crimes investigation [unit] for further investigation,” Mhlongo said.

“It is alleged that between March 2015 and September 2018 the seven suspects acted in common purpose and allegedly backdated land sale agreements. The fact that sale agreements were backdated had a significant impact on the financial reports of the company. It also resulted in incorrect profits being declared and managers receiving huge bonuses,” he said.

According to the charge sheet the executives allegedly acted “in common purpose” to backdate the sale agreements of at least 18 properties ranging in value from R9m to R263m. These include a R9m sale of land to the Toyota SA Educational Trust; a R44m sale to Growthpoint Properties; a R59m sale to Africa Rising Investments; and a R263m sale to Sathie Govender & Thomas Vlahakis Inc. The sales were dated as taking place between September 2014 and March 2018.

The state alleges in the charge sheet that a common purpose existed between the accused to commit the crimes and that they had “worked together to ensure that their fraudulent conduct could continue to ensure the achievement of the common goal of misrepresenting the true financial position of [Tongaat]”.

“Precisely where, when and in what manner the common purpose was formed is at present unknown to the state. The state does, however, allege that the common purpose was in existence at the latest shortly before and for the duration of the commission of the crimes. Further, alternatively, it is alleged that at all relevant times, where an accused was not the actual perpetrator, he or she associated himself/herself with the acts or omissions committed or omitted by the other accused and shared their intention to commit the crimes,” the charge sheet reads.

“The revenue being generated for an accounting period was being manipulated by the backdating of signatures.”

The state alleges that the effect of the incorrect capitalisation or deferral of costs and the “premature as well as the incorrect recognition of revenue” was that revenue of about R 2.4bn in THD was recognised in the financial years prior to or ended March 31 2018 that should only have been recognised in future years.

The financial statements, as prepared and presented to the board for its approval and subsequent presentation to the shareholders, were therefore “materially unreliable, false to the extent that the shareholders and the boards could not make sound and informed decisions on them or act on them with regard to the financial decisions involving the financial management of THL [Tongaat Hulett Limited] and THD and their future dealings with them”.

As consequence of the alleged fraudulent conduct THL had suffered actual prejudice as follows:

“In addition, shareholders suffered as the share price fell sharply with the publication during the year 2019 on behalf of THL to the market that the annual financial statement of March 31 2018 had to be restated reflecting a reduction in amount of revenue reflected in that statement, and also gave rise to the suspension of the listing of THL shares.”

400 pages of court papers, surfacing now, spell out the mechanics of an epic R12bn fraud second only to Steinhoff
Money & Investing
3 months ago

About 20% of the sugar firm’s beleaguered shareholders voted against a R4bn capital raising plan that will bring in controversial new ...
Opinion
3 months ago

Tongaat’s nasty rights offer surprise seems a lose-lose deal for shareholders. Unless you’re in it for the very long haul
Money & Investing
5 months ago

Did Jenitha John fail to ensure adequate oversight at Tongaat Hulett, or should she be lauded for helping to expose the scandal at the company?
Features
1 year ago
Next Article