JEREMY SAMPSON: Whom do you trust?

Elections offer us an opportunity to install leaders we trust in positions of power. Like brands, politicians past their sell-by date should be pushed aside 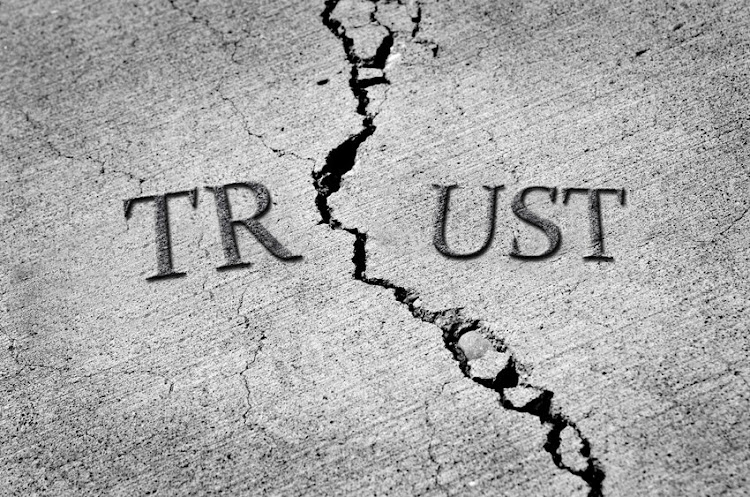 It was Anton Rupert, father of Richemont chair Johann Rupert, who once referred to a brand as a "trust mark". Studying the chart "Trust in Public Institutions and Leaders" (Fox, September 2-8, replicated here) was fascinating if depressing. But there was no accompanying commentary — an omission I will attempt to rectify.

Who or what do you trust today? If you think about it, for the most part we are loyal to brands that are authentic, deliver consistently, have integrity and are true to their promises.

But the chart, based on data from Afrobarometer, suggests a deplorable state of affairs. Trust in many of the pillars of society — parliament, the police and local councils, for example — is at just 20%-30%.

As a point of comparison, pause for a minute and rate the FM. I’d be happy to rate the magazine north of 80%. Anything much less and I wouldn’t bother reading it.

The chart broadly reflects the public sector and political constituencies. For the ruling ANC to score just 27% when it comes to trust is a huge indictment. For opposition parties to rate only 24% shows that our politicians are little short of a bad joke.

The ANC cannot pay its creditors, its staff, their Unemployment Insurance Fund benefits or the SA Revenue Service. By any metric, it is insolvent. This is despite the fact that it has looted the economy and hollowed out institutions and municipalities by deploying incompetent cadres. This is all in the public domain (thanks to the media) — and yet the party scores better than opposition parties when it comes to trust.

It is deplorable that the office of the public protector rates well under 50%, when the previous incumbent was largely admired.

Then we have the courts of law, holding up despite the pummelling brought about by the hollowing out of state institutions during the time of the Guptas, the Zumas and their acolytes (all of them still at large).

Now turn the coin and look at the private sector, and consider the brands you trust.

Brands say a lot about us, from what we wear — our shoes especially — to what we eat and drink, the places we frequent, what we drive and so on.

Do you drink Castle, Windhoek, Savanna or whatever? And for bragging rights, perhaps you drink Johnnie Walker? Would that be Blue Label, sir?

Many of us have such belief in our chosen brands that we repeat-buy in a matter of seconds, whether walking through the supermarket or ordering online.

A brand is a promise made and a promise kept, failing which we will go elsewhere. We are happy to spend good money on the brands we buy to get a good return.

In the private sector we have choices. Despite that, we often remain loyal to a small number of brands, trusting them completely.

What would any political leader give for that level of trust? 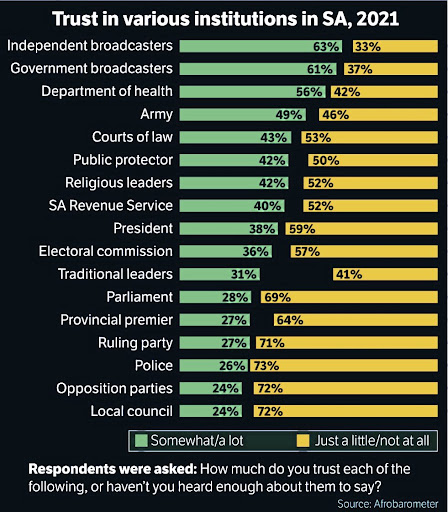 Voting with our feet

Most of us will be loyal to brands we can trust, sometimes exploring new choices but always voting with our feet. If you were to make a list of all the brands you use regularly, I doubt there would be any that you trust less than 70% or 80%, and some much higher.

So why are we putting up with poorly run institutions and so-called leaders in the public sector when we want better?

Sadly, with many public institutions we don’t have influence. But that is why elections are important. Based on whom we vote in or out of office, there will be consequences.

SA is currently not blessed with political leaders of vision and integrity. Worse, our political parties have no basic understanding of how to build a trust mark.

We need leaders who respect all of us, provide jobs, health care, education and safety, and nurture the private sector.

In many ways, choosing such leaders comes down to the issue of trust. Brands that have passed their sell-by date should be pushed aside by the new.

JUSTICE MALALA: Why trust in Cyril is falling

For how long will Ramaphosa beg and ingratiate himself with these looters?
Opinion
3 months ago

By the numbers | Trust in public institutions and leaders

South Africans' trust in institutions is at its lowest since 2006, according to the results of an annual survey by Afrobarometer
News & Fox
2 months ago
Next Article