EDITORIAL: It must be nice to live on planet Cyril 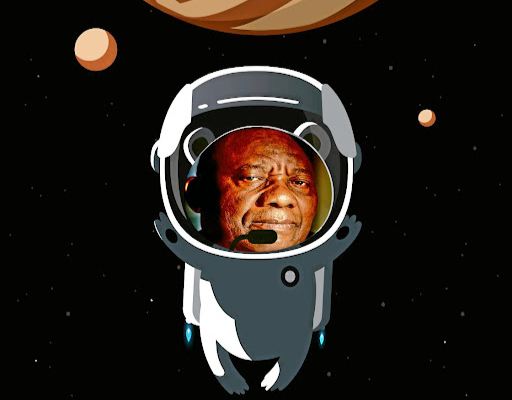 Self-deception, it would seem, is the one non-negotiable skill you need to be a powerful SA politician. This has been evident this week as first the ANC, then the DA and the EFF, dizzied themselves trying to whip up a respectable face for their below-par showing at the polls last week.

In particular, the ANC seems to be in denial that there’s any crisis — even though it now presides over a country whose citizens are sharing electricity at two-and-a-half-hour intervals, and where nearly half the people who want jobs can’t find them.

As power utility Eskom imposed stage 4 load-shedding and the country ground to a halt once again this week, President Cyril Ramaphosa penned an upbeat missive to the country, chock-a-block with bland platitudes about SA’s investment potential — with hardly a mention of the blackouts.

It illustrates that Ramaphosa seems to inhabit a different world from his subjects. In his universe, there is no mindless red tape, bent bureaucrats, water outages or lukewarm investor sentiment. The lights are always on, and bloodless, soothing words substitute easily for leadership, and action.

In his letter, Ramaphosa spoke of how this week, the country was meant to hold its annual SA Investment Conference — the fourth since 2018. The first was a flagship event, designed to show the world that after the lost decade under Jacob Zuma, SA was ready to welcome back global investors. And the event attracted pledges of R1.2-trillion of investment. Sure, many of these were projects that had already been committed to previously, but still. Now the event has been shifted to March 2022, supposedly, due to the elections, COP26, and the Intra-African Trade Fair. And by then, there’ll be great vaccine coverage, Ramaphosa pointed out.

But in the meantime, Ramaphosa assured would-be investors that SA’s "ambitious" investment drive continues. "Even in the midst of the challenging economic environment caused by the pandemic, which was exacerbated by the violence and destruction that occurred in parts of KwaZulu-Natal and Gauteng in July, companies continue to make good on their commitments and to look for other investment opportunities in SA," he wrote.

Now it is true that deals in corporate SA are picking up again. In recent times, overseas firms like Volaris and Heineken have launched buyout offers for Adapt IT and Distell respectively. Platinum company Northam has snapped up a third of RB Platinum, while property company Redefine is bidding for EPP, and MTN is said to be stalking Telkom.

But while this is encouraging, it does suggest that many companies see takeovers as the fastest route to growth in a moribund economy, rather than building from the ground up and striving for organic growth. This betrays the lack of faith in policymaker’s pledges to spark meaningful GDP growth.

There is also something quite surreal about Ramaphosa clanging the bell for new business, when those companies that have already put a stake in the ground cannot source enough power to keep their doors open as they need to.

On the streets, the mood is sour. The drone of generators masks the sound of money slipping away from these shores: not just because it is almost impossible to get board approval for any sort of expansion plan amid stuttering power supply, but also because the state’s response to what is a national crisis is so dreadfully limp.

When journalists from News24 asked Ramaphosa’s spokesman for a comment on the blackouts this week by 8pm, his spokesman asked if they had "a sense of humour". As if, amid a national crisis, it was an outrageous imposition to expect the President to address the issue quickly.

Were there any sense of urgency in the government, Eskom would have been unbundled by now, and independent power producers would be pumping electricity into the grid. But then why would our politicians care? You can bet they’re not negotiating their power-sharing coalitions in the dark, or facing the collapse of their income. Unless this changes, another lost decade looms.

If they don’t heed the message from the voters, the main political parties will let the country down — and the EFF in
Opinion
3 weeks ago