A Black Aesthetic: A View of SA Artists (1970-1990), at Joburg’s Standard Bank Gallery until April 18, is a timely reminder of SA art’s history of modernism. Don’t miss it 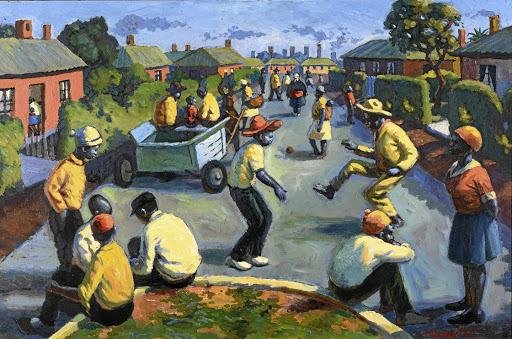 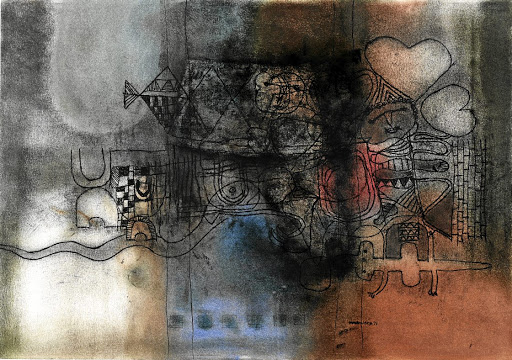 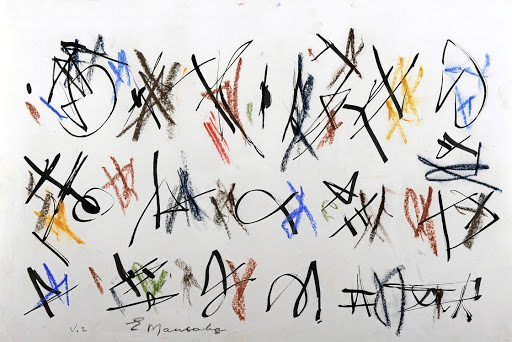 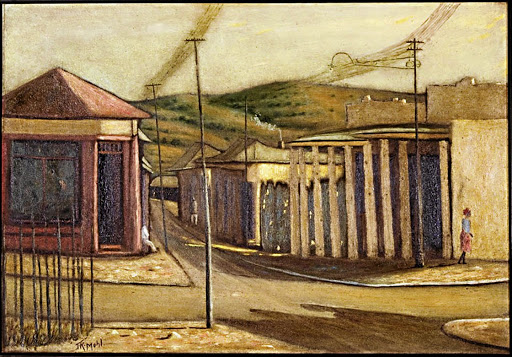 For most of us, there are names we’re likely to recognise when we walk around at A Black Aesthetic, on now at the Standard Bank Gallery. It’s an exhibition drawn mainly from the University of Fort Hare art collection, along with a few pieces from the Johannesburg Art Gallery and the Wits Art Museum. As the title suggests, it concentrates on the work of black SA artists, mainly between 1970 and 1990.

The familiar names include Dumile Feni, Ernest Mancoba and Gerard Sekoto. It’s not a coincidence that they’re the artists who fetch good prices on auction. Part of the reason for that, in turn, is that these are artists who lived and worked in exile, found international recognition, ending up in important collections and gaining some proper scholarly treatment.

Then we have Sydney Kumalo, Lucky Sibiya, Ezrom Legae and Lucas Sithole, who are undoubtedly well-known (and also do well on auction). Their work is also relatively well documented, partly through their association with the Polly Street Art Centre, which in turn was closely associated with Cecil Skotnes and Edoardo Villa, both powerful forces in mainstream SA art.

But it comes as a bit of a shock to see how many of the artists featured in this extraordinary exhibition are unfamiliar, even to those of us who might have thought we knew a little bit about local art. It’s a stark reminder that the 20th-century black SA art that is generally known barely scratches the surface of what was being produced.

The University of Fort Hare art collection was established in 1971, when the university’s art department opened. It is one of the biggest collections of black SA artists, but hasn’t been seen outside the Eastern Cape since the early 1990s, which will make it a revelation to Joburg exhibition-goers.

That very fact, however, made showing it a tricky endeavour for its curator, Same Mdluli, who is also the gallery’s manager.

The reason we don’t recognise so many of the artists is because so little is known about them. Biographical and artistic details about many of the artists on show have been lost and forgotten — there is simply a lack of information, archival material or proper records for a curator to draw on.

In showing the work in this remarkable collection, Mdluli wanted not merely to open up the archive again, she wanted to shift the way that we look at black SA art. She’d have preferred to concentrate on the artists individually, but how do you do that when only a handful of them are known?

So she set herself the paradoxical task of putting on a group exhibition of black 20th-century art that would finally put an end to the very notion of black SA artists as a group. She wanted the showing of the collection — even employing a term like "black aesthetic" — to bring about the destruction of the way she was forced to show the work, putting "black art" back into the mainstream.

This exhibition was conceived not as an overview, but as a catalyst: a kind of "burn after viewing" exhibition.

Mdluli writes in the catalogue: "At the core of the exhibition is the wish to provide a more substantive account and possibility for scholarship" … its aim is to galvanise a "detailed investigation of black art (his)tory by black scholars".

Now, as laudable as that sounds, it’s a claim that might make one a little despondent, because it turns out that this is quite a familiar formulation for these kinds of exhibitions, and might even be seen as a way of merely ducking the issue.

For example, in the foreword to the landmark 1988 JAG exhibition of "black art", The Neglected Tradition, curator Christopher Till (now curator at The Javett Art Centre, which opens later this year in Pretoria), wrote that the intention of that exhibition was to "re-evaluate SA art by tracing the development and influence of black SA artists" and stimulate "further research [that] will, in the future, lead to a comprehensive history of SA art".

Mdluli herself points out that the 1992 book Images of Man: Contemporary SA Black Art and Artists, by EJ de Jager, an earlier take on the Fort Hare collection, also aims to serve "as a catalyst for encouraging further research about the vast number of black SA artists whose names appear in its pages". And there are other similar, less comprehensive books.

Yet here we are more than 30 years later, trying again, with little more at our disposal than those curators had. It might cast doubt on the effectiveness of this strategy.

What Mdluli has done, rather than merely taking a chronological approach, and in the absence of a biographical one, is to take a thematic tack — grouping the works according to what the artists felt, their experiences, the cultural life at the time, and, perhaps most importantly, according to "expressive modes" that continue to influence contemporary SA art. Where it has been possible, for Feni and Legae for example, she has shown their works biographically.

Her approach for the rest has been to try to identify themes: early modernists; black expressions of abstraction; black consciousness and art; the township and black artists; black theology; black histories; and mythology and African spirituality. She’s also grouped the sculptures together.

It’s an approach that is powerful in the way that it evokes strains of what you might call black experience at the time. But perhaps where this approach really comes into its own is in the way that it represents a response to an undeniably modern reality — albeit a reality of pain and dehumanisation under apartheid and townships and segregation — but nonetheless, a reality that was urban, progressive and forward-looking in its mentality.

If Western modernism drew on what it saw as the primal vitality in African and Oceanic aesthetics to subvert what it saw as its own cultural rot in the early 20th century — a kind of loss of humanity through cultural ultra-refinement — it still tends to represent a "heart of darkness" in European art. The use of an African-inspired aesthetic in Western modernism was meant to be subversive and redemptive, but it relied on African art being seen as traditional and authentic, and ultimately primitive.

What, then, happens to the story Western modernism tells itself when African art is also modern, not "traditional" at all?

The body of undeniably modernist work in A Black Aesthetic certainly wasn’t relying on the same logic as its Western counterpart. And yet there it is. In the face of this vividly represented experience, it does indeed become difficult to sustain the mainstream understanding of either the standard histories of SA art, or the conventional understanding of modernism in general.

Despite their variety, the works together seem to gesture towards a model of modernity that is less about a rupture with the past — not the radical opposite of the traditional and the modern, or of urban and rural, or of African cosmologies with Christianity — but with the modern as somehow continuous with the past.

Equally, at a time when racial and cultural essentialism is a common characteristic in the identity politics of our time, an exhibition like this, by opening up a history of African modernism, has the potential to disrupt those rather more ideological positions. (Novelist Zakes Mda, who writes an introductory essay in the exhibition catalogue, even hints at the cultural cross-pollination he suspects took place between the "Harlem Renaissance" in the US and SA black modernism, as many black American writers spent time in exile in Paris, as did Mancoba and Sekoto.)

But what then of the need to actually catalyse some deeper art-historical research into the individual artists on show? Is this exhibition, like those before it, doomed, despite its best intentions, to merely reinscribe the terms it hopes to disrupt? Maybe. But what could save it is the way that Mdluli has tried to choose themes that might have clear influences in contemporary SA and African art.

A recent release from art research consultancy Corrigall & Co notes some of the prices African art has recently fetched. A work by Ghanaian artist El Anatsui sold for just over R25m at a Sotheby’s London auction this month (April). Last November art auctioneers Strauss & Co had a special themed section of their modern and contemporary sale titled An Unsung History, which commemorated the 40th anniversary of The Neglected Tradition. According to a press release, two works by Moses Tladi on the sale fetched three times their high estimate, and one of them, Mountain Landscape (Mont-aux-Sources), went for R455,200. There were other surprises, such as Cyprian Shilakoe’s Figure with Clasped Hands, which fetched R250,360.

Perhaps the timing of A Black Aesthetic, coinciding with improving market values for 20th-century black art, and the explosion of contemporary African art, together with the broadening base of art buyers that the likes of Strauss & Co are hoping to cultivate, will provide a different kind of motivation for proper research into the individual artists in this exhibition. Time will tell. If not, go see this one. It might be another 30 years before someone tries again.

1.
How voyage on a cruise ship became a holiday from ...
Life
2.
AI finds antibiotic to treat drug-resistant ...
Life
3.
Destructive farming is the issue — not whether ...
Life
4.
Right to Repair ruling is a ‘big win’ for ...
Life / Motoring
5.
An ode to the enduring attraction of red bottoms
Life / Arts & Entertainment

Behind this year’s Design Indaba: more utopia than dystopia

Putting art shows between the covers

Behind this year’s Design Indaba: more utopia than dystopia

Putting art shows between the covers

1.
How voyage on a cruise ship became a holiday from ...
Life
2.
AI finds antibiotic to treat drug-resistant ...
Life
3.
Destructive farming is the issue — not whether ...
Life
4.
Right to Repair ruling is a ‘big win’ for ...
Life / Motoring
5.
An ode to the enduring attraction of red bottoms
Life / Arts & Entertainment

Spar owner must pay R12m to staff for breaking labour ...