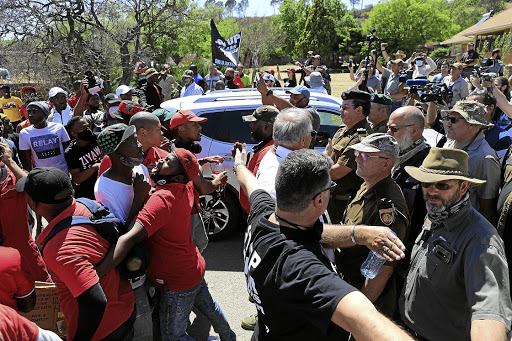 A young farmer gets beaten and strangled to death near his home. His name is Brendin Horner. He was 21.

The alleged killers are quickly tracked down and arrested. They are Sekwetje Isaiah Mahlamba, 32, and Sekola Piet Matlaletsa, 44.

A lynch mob storms the magistrate’s court, demanding access to the two men.

A police van is set on fire.

And Senekal, population 25,452, a Free State farming town where the spire of the Dutch Reformed Mother Church and the Sasko grain silo thrust into an African blue sky, makes the news.

Protesters arrive, some in red EFF T-shirts and berets, others in green berets and brown fatigues that look like they came straight out of a back-to-the-1980s army surplus store.

For the record, the most visible common ground is the lack of masks on each side.

Now, if you had to do two things slightly more explosive than chucking a jerrycan of petrol onto a bonfire, those would be singing Dubul’ iBhunu (Shoot the Boer) to a bunch of farmers who believe they are the next victims of an ongoing genocide, and/or wearing crisp ex-SADF nutria fatigues to a demonstration filled with angry people who believe that white people want to claw back the past.

The script never changes. So there was nothing new in the political grandstanding that followed as EFF baiter-in-chief Julius Malema and Freedom Front Plus dinosaur Pieter Groenewald made hay out of Senekal’s pain.

And while the politicians exhort on and episodes of violence ripple through the town, the intertwined fates of three men – one dead and two who, if found guilty, will be swallowed for good by some grim prison – are blowing away, like red Free State dust on the wind.

For all their polarising rhetoric on social media, the EFF and AfriForum share a dangerous populist posturing. Where is the moderate middle?
Features
9 months ago
Next Article