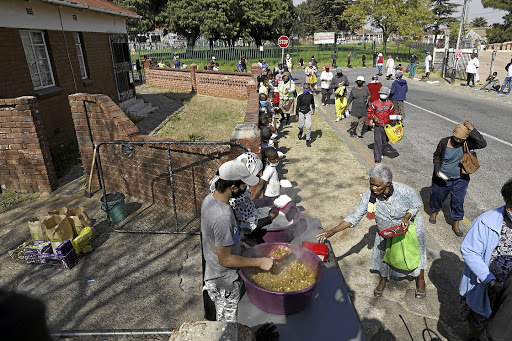 The lockdowns that were instituted in response to the Covid-19 pandemic ravaged economies around the world. About 3-million South Africans lost their jobs, and half as many were furloughed.

Social protection mechanisms of even the richest countries were put under strain, and many countries, including SA, introduced new forms of social grants or other means of social relief. But these mechanisms couldn’t prevent a sharp rise in poverty, nor could new highs of public spending by even the most conservative fiscal regimes.

In a developing country such as SA, poverty often manifests in hunger or poor nutrition (unbalanced, carbohydrate-rich diets, for example).

We need more statistics on nutrition, but Stats SA’s surveys have helped us track hunger for almost 20 years. Comparing these with the first wave of the Nids-Cram survey allowed us to conclude that much of the reduction in hunger over the past two decades brought about by the expansion of the child support grant has been almost entirely reversed.

The second wave of the survey provides evidence that things are improving, but that the situation is still precarious. Where 22% of households had reported in wave 1 that an adult in the household had gone hungry in May/June, only 16% reported this for wave 2 in July/August (see graph).

Child hunger also declined, from 15% to 11% of households reporting it.

As in wave 1, about 30% of those who reported hunger said that adult or child hunger had occurred every day or almost every day in the previous week. Fewer households ran out of money for food: 37% in June compared with 47% in April. 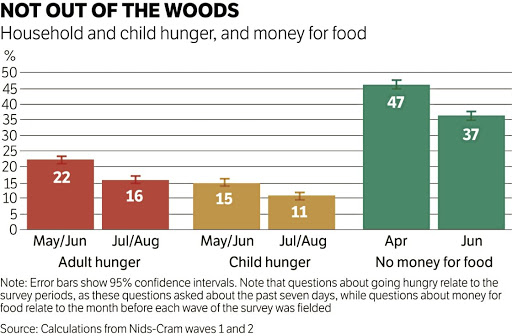 In comparison, the Stats SA general household survey of 2018 reported only 25% of households running out of money for food in the previous year — a far less strict criterion.

In the two population groups containing most of the poor, hunger declined substantially. Adult hunger in the black African group decreased from 26% in May/June to 19% in July/August, and for the coloured population from 15% to 8%.

Lack of money to buy food in the month before the survey (April for wave 1; June for wave 2) also declined, from 50% to 40% for black respondents and from 51% to 37% for coloured households.

The government’s temporary emergency social relief measures to mitigate the impact of the nationwide lockdown included both "top-ups" to existing social grants, as well as the institution of a Covid-19 social relief of distress (SRD) grant and the temporary employee/employer relief scheme (Ters).

We found that the SRD grant of R350 a month was quite well targeted at the poor, but by itself it was too small to pull many out of food poverty.

The Ters was much larger, with amounts of between R3,500 and about R6,700 a month. It was to be paid for up to three months, to cover part of the salaries of employees on an income-replacement sliding scale. Many households benefiting from Ters did manage to escape food poverty.

While hunger has diminished from the early days of the outbreak, it’s still a serious problem in the poorest areas

Though emergency food assistance delivered by the government and NGOs was helpful to many, their reach has not gone as far as that of the grants; and the government’s relief efforts have been mired in controversy, as documented in a report from the auditor-general.

The national schools nutrition programme started again in July and August, and may have softened the effect of hunger on some households.

Though wave 2 of Nids-Cram shows a reduction in hunger, levels are still worryingly high. Unless the government’s expanded social relief measures are continued, hunger and social distress are likely to escalate far beyond the levels experienced in the early part of the national lockdown, when wave 1 of the Nids-Cram survey was administered.

For a government that is already battling with an unsustainable public debt burden and an economy that has been in the doldrums for more than a decade, this is, unfortunately, very bad news.

*Van der Berg is professor of economics and the director of the research on socioeconomic policy unit (Resep) at Stellenbosch University; Bridgman is a researcher with Resep

How four months wiped out 10 years of jobs growth, and created millions of new grant recipients
Features
7 months ago