Magashule has gone to war without an army: he’s out there on his own, like a character from a counterfeit Harry Potter movie, brandishing a wand 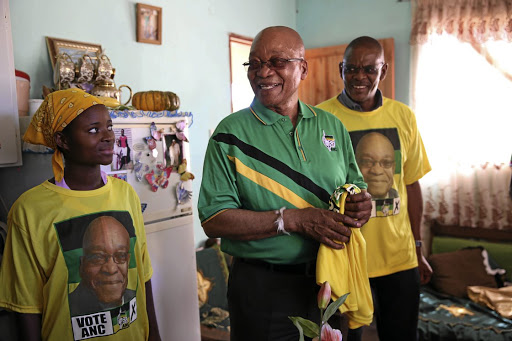 However much Ace Magashule might want it to be true, we should never liken him to the Prince of Nkandla as we consider his potential to stage a political comeback.

On Friday, Magashule lodged a court bid to overturn the ANC’s decision to suspend him as secretary-general, arguing that it infringed the principle of innocent until proven guilty.

It might seem that Magashule is treading the same path which former president Jacob Zuma walked in the months after he was axed as deputy president in 2005 — time he used to successfully reframe himself as a victim, which propelled him to the ANC presidency in 2007 and the Union Buildings two years later.

Back in 2005, former president Thabo Mbeki fired Zuma, after his financial adviser Schabir Shaik was convicted of corruption related to the arms deal. At that point, Zuma was even ready to step aside as the ANC’s deputy president too, but his supporters revolted at the party’s 2005 national general council (its midterm review meeting) and overwhelmingly insisted Zuma stay on as party deputy president.

Magashule has never had this sort of cachet in the ANC. And the level of his ANC support, as a result, is entirely different.

Part of this is historical: when the ANC emerged from exile, Magashule was considered an “ice boy” — a common phrase in our colloquial political parlance, drawn from the more opulent political gatherings, where the underling is tasked with fetching ice for the champagne-guzzling political bosses.

By contrast, Zuma was an established political A-lister by the time the ANC “came back”. As someone who’d served time on Robben Island, and as a leader in the ANC’s underground structures in the 1980s, Zuma was part of a prominent leadership band playing second fiddle only to Nelson Mandela and OR Tambo.

Another reason for the difference is the extent of their respective political base. Today, Magashule finds himself fighting for political survival without a real strategy. Recently he resorted to cold-calling journalists, trying to convince them that, despite his suspension letter, he really was still the ANC’s secretary-general.

Zuma, however, played a far smarter hand in the lead-up to his defeat of Mbeki at the “battle of Polokwane” in 2007, thanks in part to his considerable base. Unionists, communists, youth and women operators in the tripartite alliance did the spadework for him. Zuma would never have had to call journalists to tell them he was still the ANC’s No 2.

In contrast to his immense credibility problems today, Zuma in 2005 was far more respected in the alliance. He positioned himself as a voiceless victim, and Mbeki’s opponents were drawn to him as the only man around whom a powerful campaign to unseat Mbeki could be built.

Back then, the schism was ideological. Cosatu and the SACP were upset with Mbeki, caricaturing the government’s growth, employment & redistribution strategy as the policy solely responsible for SA’s troubles.

Zwelinzima Vavi, Cosatu’s general secretary at the time, compared Zuma’s comeback to a “tsunami” and he, along with SACP boss Blade Nzimande, then ANC Youth League president Fikile Mbalula and foot soldiers like Julius Malema, worked to ensure this happened.

The Zuma faction created no-go zones for Mbeki and his allies, who, remarkably, were booed at public events and rallies. The environment was feverishly anti-Mbeki.

It’s a different world from where Magashule finds himself today. In effect, he has gone to war without an army: he’s out there on his own, like a character from a counterfeit Harry Potter movie, brandishing a wand. Magashule looks foolish, and ill-equipped in the face of a strategy in which he has been given enough rope to hang himself.

By the time the inevitable happens, Magashule’s political demise will have been widely accepted — and he’ll hold no currency even among the camp that would like to weaken President Cyril Ramaphosa’s faction.

But if Magashule’s fate is destined to be entirely different to Zuma’s, it is also true that their political prospects have been deeply entwined for years.

It was only after 2008, when Zuma became president, that Magashule was picked as premier of the Free State. During the Mbeki era, he’d been blocked from leading the provincial government, despite his firm grip as a subnational party baron.

And Zuma’s comprehensive fall from grace — being reduced to a “TikTok sensation” who releases videos of himself dancing with teenagers — hasn’t helped Magashule one bit.

The radical economic transformation (RET) brand, which has become synonymous with Zuma and Magashule, has lost its spark as an effective political philosophy, and now seems to be nothing more than an umbrella for the rogues.

Some elements in the media have blown up the Magashule-Ramaphosa battle as though it is a fight between equals, but this is not remotely true. Instead, what we are watching is a suave Ramaphosa allowing a country bumpkin to embarrass himself.

Not an equal fight

Ramaphosa has used this moment to establish himself as a politician who plays the long game.

His conflict-averse nature may have proved endlessly frustrating to even his most ardent supporters, but it has worked in allowing Magashule enough space to expose himself as a liability — even for those seeking to challenge the president.

What has helped is that Ramaphosa has not created many enemies since becoming ANC president in December 2017. His calculating nature (or risk aversion) meant that Magashule ended up being the one stoking the fire of conflict.

Of course, Ramaphosa’s leadership is not without weakness. For one thing, he moves way too slowly in implementing reforms in policy and institutions, he avoids leading from the front and he prefers to get the “collective” to take the tough decisions. This creates a sense of inertia in the government.

The upside of this approach for Ramaphosa is that he gets very little blood on his coat.

The downside, however, is that this lack of clarity over the ANC’s political centre makes it seem that the likes of Magashule are worthy political challengers  — when the truth is they have no political backing, skills or public appeal.

The real test still has to come

Ramaphosa will now surely win a second term, but we shouldn’t overdramatise that either.

Magashule’s ousting may well cause some sort of split in the ANC —but it won’t be as significant as the split that created COPE or the EFF.

Both broke from the ANC and became “6% parties”, picking up about 1-million votes at the polls. COPE has since withered, but any new split will be keenly felt by the ANC since, in the 2019 election, its support dwindled to an uncomfortable 57% of the vote.

However, acting against Magashule may slow this rate of decline — some voters might interpret this as the rejuvenation of the party, and a serious landmark against corruption.

This will only be partly true. Indeed, we should wait for the moment the Hawks and the National Prosecuting Authority seriously begin making inroads before making sweeping statements about the ANC’s intolerance for corruption.

Magashule was always easy to include in the rogues gallery, but a real test will be what happens when Ramaphosa has to take on his closest allies. Many of them are, after all, just as rogue as Magashule.

If the ANC can’t respond clearly to a simple query, how can we trust it to handle the Covid vaccine rollout?
Opinion
8 months ago

It’s clear that Ace Magashule is no chess grandmaster, given his absurd attempt to ‘suspend’ Ramaphosa last week. But his bungling reveals that he ...
Features
8 months ago

Magashule’s ‘consultation’ with the ANC elders went as everyone expected. And, once Magashule falls, it seems he may take the forces of ‘radical ...
Features
8 months ago

MARKET WRAP: JSE muted as investors take stock of US ...