The Joburg hospital has started reopening as the fire damage is repaired, but delays, security issues and patchy health and safety compliance are affecting staff retention 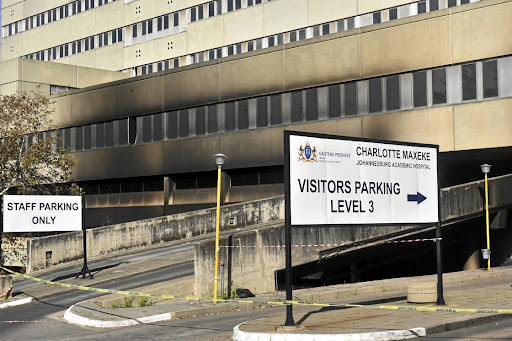 Section27 has welcomed the reopening of Charlotte Maxeke Johannesburg Academic Hospital, but the public interest law centre’s head of health, Sasha Stevenson, says it is worried that psychiatric services at the hospital may be reinstated only at the end of 2023.

The first patients were admitted on May 4, mostly from Helen Joseph Hospital, and just under 800 are receiving health care at the facility. There are many psychiatric patients awaiting admission, but as of May 9, only 15 had been transferred to Charlotte Maxeke.

Stevenson says the emergency department at Helen Joseph catering for psychiatric patients has been overwhelmed. “This move is one that will relieve some of the pressure on Helen Joseph, but the numbers we are looking at are just not sufficient to relieve all of the pressure,” says Stevenson.

Section27 wrote to the department of health on May 4 with suggestions on how to resolve the issue of psychiatric bed shortages at Helen Joseph. It is waiting for a response.

“There needs to be a more sustained response to relieve some of the shortages and make sure that the mental health-care users are being cared for over what looks to be another 18 months,” says Stevenson.

The effects of the hospital being closed since the fire in April 2021 can be felt across the facility and the province, she says. “The position of patients who need mental health-care services is acute because the Charlotte psych and mental health unit was quite substantial and had in recent years been capacitated further … The loss of that unit is very problematic.”

The hospital’s accident and emergency unit was scheduled to start operating at 40%-50% of capacity on May 11. Three of the unit’s seven areas have been opened. The rest will be opened next week, once the crucial CT scanner is online and operational.

Addressing the media on May 8 after visiting level 6 of block 1, health minister Joe Phaahla said an estimated R68m has been spent on the unit so far.

Work now begins on the rest of block 1. The affected blocks will reopen over a period of months, said Phaahla. The project is expected to be completed by November 2023. For now, the hospital can take only priority 1 and 2 patient referrals from other hospitals, restricting walk-ins and the number of patients brought in by ambulance.

A fire destroyed part of the hospital in April 2021, displacing hundreds of patients and destroying millions of rands worth of medical equipment and supplies. Many wards had to be closed, including neurology, psychiatric, oncology and paediatric. A structural fire report was due on May 15, but its release has been pushed out to end-June.

The national health department took over repairs from the Gauteng department of infrastructure development on March 4. At a portfolio committee of the latter in March, it was announced that the provincial department had overspent on Charlotte Maxeke by 138%, with a completion rate of 72%.

Modise Mokwena, regional secretary of the Joburg branch of the National Union of Public Service & Allied Workers (Nupsaw), called attention to the issue of security. Union members had their cars stolen because of parking issues at the hospital caused by the fire. Copper pipes worth R30m were reportedly also stolen in 2021. This made it difficult to justify a R40m security budget.

“It is important for the health department to address the issue of theft and vandalism since the CT scanner was vandalised during a time when security was beefed up thanks to a security budget,” said Mokwena.

Phaahla said the CT scanner, which required imported parts, should be online by next week. But Mokwena said there is more than one CT scanner in the hospital and it must be clarified which one is being repaired as the union’s radiographers need clarity.

The hospital has more than 5,000 staff and has trained just over half of them on the new fire alarms and drills; training continues. Despite the partial reopening, Mokwena said members are not confident that other hospital wards are fully compliant with occupational health and safety standards and legislation.

Phaahla confirmed that the department has received the required occupational health and safety approvals and certificates for the reopened unit from the City of Joburg.

There has been a wave of resignations that CEO Gladys Bogoshi did not comment on, though she confirmed that the hospital has a vacancy rate of 11% with 643 vacant positions. Bogoshi, who was previously CEO at Helen Joseph, has headed Charlotte Maxeke for nine years and has not been held to account for the declining conditions and delays in rebuilding the hospital.

Mokwena said staff morale is low and more than half of the employees in the trauma department — mostly Nupsaw members — have resigned, leaving at least 15. “It simply tells you that the people who have got the skill to give the service to the public are no longer there … so the members of the public have their lives in danger.”

This article was first published by New Frame

EXCLUSIVE: Behind the curtain at Charlotte Maxeke hospital

Nearly a year after a devastating fire ripped through Charlotte Maxeke hospital in Joburg, the pace of repair is still painfully slow
News & Fox
2 months ago