Rally to Read on the road again

The true experience of the outreach programme is making a comeback 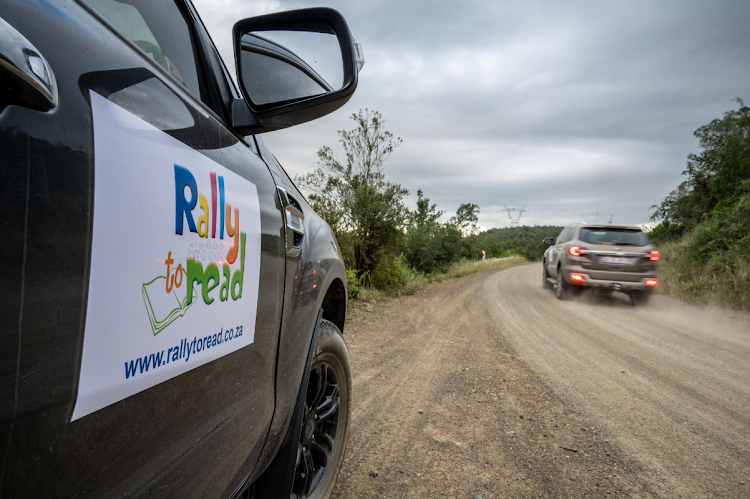 Making tracks: Rally to Read has resumed its rural literacy drive in 2022, with trips to the Free State and the Eastern Cape Picture: COLIN MILEMAN

And we’re off! After two years of low-profile support because of Covid, recent small rallies in the Free State and the Eastern Cape have given Rally to Read sponsors a taste of what they have been missing since March 2020. With four more rallies planned for later this year, primary schoolchildren in remote, impoverished areas of SA can also look forward once again to the excitement and promise that Rally to Read brings.

The programme, now in its 25th year, has offered literacy to hundreds of thousands of children since its launch in 1998.

Many schools lack the basics of education, such as books, pencils and paper. Running water, functioning toilets and even electricity aren’t always available. Teachers are often demotivated.

In the face of these challenges, we shouldn’t be surprised that the average 14-year-old rural child — at the age when he or she is due to enter high school — has a reading age of seven, making further education almost impossible.

Rally to Read, in which the FM is an organising partner, has bridged this literacy gap by providing schools with the tools to learn and teach. Through the generosity of sponsors, primary schools are provided with portable libraries containing books for classroom and private reading. Boxes of stationery are also delivered. Teachers are retrained by SA’s leading education NGO, the Read Educational Trust, to use these resources. The trust also monitors literacy progress over the three years each school is supported.

Because education should also be fun, Rally to Read provides schools with sports equipment such as footballs, netballs and rugby balls as well.

What makes Rally to Read unique is the personal relationship between sponsors and those they help. Traditionally, sponsors have spent weekends travelling in cross-country convoys to far-flung  schools to meet children and communities and deliver their goods in person. Over the three years with each school, sponsors see the children develop, both in literacy and in confidence.

Covid put these events on hold. The programme has continued, but deliveries have been low key, with a handful of sponsors meeting teachers and maybe a few children. Much of the excitement has been missing.

Rally to Read has hosted two events for 2022 so far, with four more on the cards

That is changing. Early this year a convoy of sponsors and Rally to Read organisers delivered books and other educational materials to a group of schools in the Free State. Participants were able to mingle with teachers and children — albeit following strict social distancing rules.

The group included rally ambassadors Emmanuel Taban and Barney Mthombothi. Taban, a leading pulmonologist and pioneer in the treatment of Covid, was a Sudanese child refugee who made his way on foot to SA. Mthombothi, a former FM editor and SABC News CEO, is an influential newspaper columnist.

At the end of February Ford hosted guests at a rally near Gqeberha in the Eastern Cape. Four teams driving off-road vehicles delivered goods to farm and township schools. At the smallest farm schools, nearly all the children were present, with their parents. Singing and dancing were the order of the day as warm weather allowed everything to happen outdoors and Covid regulations could be met.

The events were a foretaste of what Rally to Read hopes will be a return to greater numbers of people. Later this year rallies are planned in the Free State, the Western Cape, KwaZulu-Natal and the East London side of the Eastern Cape.

Brand Pretorius, chair of the national organising committee, says there will be no headlong rush for growth, as health needs will be the priority. Nevertheless, those who took part in recent rallies found themselves caught up in the spirit of things.

“[The Gqeberha rally] was the most humbling exercise I have been involved with,” says Naresh Maharaj, a journalist with the Bizcommunity news service. “It touched my heart in many ways.”

Nick Jonsson, CEO of the Jonsson Workwear apparel group, whose corporate social investment foundation is Rally to Read’s lead partner, is also glad to see some semblance of normality return. Before Covid set back all rural education, Rally to Read “was looking very rosy, and we would have gone from strength to strength and attracted more sponsors”, he tells the FM. Still, he remains confident of  the programme’s future and says it will double its efforts to catch up.

* It costs R39,000 to be a Rally to Read sponsor in 2022.  This includes R3,000 towards a stabilisation fund for educational emergencies. Of the remainder, two-thirds buys classroom libraries and the rest pays for teacher training.

For more information or to become a sponsor, visit www.rallytoread.org. ​

Walking away is not an option

We all share responsibility for the weak and helpless, says Jonsson Workwear CEO Nick Jonsson
Features
1 month ago

Rally to Read’s new ambassador, who became a lung specialist in SA after walking to this country from his native Sudan, can teach a thing or two ...
Features
6 months ago