Rally to Read’s new ambassador, who became a lung specialist in SA after walking to this country from his native Sudan, can teach a thing or two about perseverance 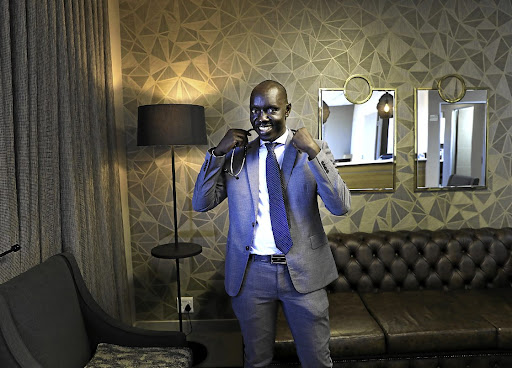 If anyone can set an example to disadvantaged SA children of how to make the most of their limited education opportunities, it’s Emmanuel Taban. The former Sudanese child refugee, who made his way on foot to SA before becoming a leading lung doctor and a pioneer in the treatment of Covid, has become an ambassador for Rally to Read, the rural primary schools programme in which the FM is an organising partner.

Taban has been joined by former FM editor Barney Mthombothi, now a leading newspaper columnist. Mthombothi, also the former CEO of SABC News, headed the FM during the period of Rally to Read’s greatest growth. He says: "Promoting literacy, especially in rural schools, is crucial. I’m honoured to be involved in the programme again. It is a worthy investment in the future of SA."

Since its launch in 1998, Rally to Read has offered the best hope of literacy to hundreds of thousands of rural primary school children, many in remote corners of the country.

Historically, they have been ill-served by SA’s failing education system. The average 14-year-old in rural SA has a reading age of seven, rendering them incapable of progressing to high school.

Rally to Read has helped children bridge this gap and continue their education, even to university. It does this by the simplest of means. Selected primary schools are provided with portable classroom libraries packed with books designed to encourage reading and, later, writing. Teachers are given specialist training in how to use the resources. This training is provided by SA’s leading education NGO, the Read Educational Trust, which then monitors the progress of children and teachers.

Each school is supported for three years — long enough, say educationalists, for a culture of literacy to take hold. Independent research shows the programme works.

Taban wants to make sure its impact deepens further. As a 16-year-old, he fled Sudan after the death of his father during the country’s civil war, and lived for two years on the streets of neighbouring Eritrea. From there, he made his way to an uncle in Kenya, but was rejected and kept going south, finally reaching SA.

Here, with the aid of charities, he resumed his education, becoming a doctor and, ultimately, a pulmonologist, or lung specialist. His story is recounted in his autobiography, The Boy Who Never Gave Up.

Last year, London-based New African magazine named Taban one of the 100 most influential Africans of 2020. According to an acquaintance: "His story is an inspiration, especially to young people pursuing their education and career. He gives hope that they, too, can achieve whatever they aim for in life."

Taban himself says: "Life is a journey and every journey needs purpose. Allow your passion to drive you toward that purpose."

Before Covid brought the world to a halt, Rally to Read libraries and other educational resources were delivered to schools by sponsors. Weekend-long rallies, travelling cross-country through areas rarely seen by most South Africans, allowed them to meet the children they were helping, as well as their families and communities. During the three years each school was supported, they could see the children’s educational progress.

These visits have been suspended since early 2020 because of the pandemic. Instead, Rally to Read organisers and small groups of sponsors have delivered goods in low-key events attended only by teachers. It is hoped that the full programme will resume in 2022, but this will be dictated by health priorities.

What is certain is that the need for Rally to Read has grown since Covid struck. In many rural areas, education has come to a virtual standstill.

Without electricity, never mind computers, and with parents nervous about sending children back to overcrowded classrooms, teaching has been intermittent at best.

As a result, the need for support has never been greater.

It costs R36,000 to become a full Rally to Read sponsor — though smaller packages are available. Of that, 60% buys books and 40% pays for teacher training. Since last year, the programme’s lead partner, the Jonsson Foundation, has matched new sponsorships rand for rand.

Brand Pretorius, Rally to Read’s co-founder and chair of its national organising committee, describes the programme as "a story of caring, collaboration and hope — of things intensely human".

He adds: "It is uniquely South African. It is about giving, sharing and discovering, for the good of all."

Alu Sithebe, a private equity investment specialist who sits on the boards of several major companies, including Metair and Dis-Chem, has just joined the organising committee. She is the product of a small Eastern Cape primary school, and says reading opened her eyes to the world.

"My reason for joining hands with Rally to Read is to help spread the love of books so that the youth reached by the programme may similarly benefit."

For more information, or to become a sponsor, visit rallytoread.org.za

Covid has deepened the already-difficult education crisis in SA’s rural areas. It’s time to fight back
Features
11 months ago

Thousands of primary schools in rural areas receive scant or no support from provincial education departments. Without a helping hand from sponsors, ...
Features
1 year ago
Next Article

The curse of cutbacks on rural schools

New chapter for Rally to Read

Giving back is an adventure with Rally to Read

The curse of cutbacks on rural schools

New chapter for Rally to Read

Giving back is an adventure with Rally to Read