Almost six years after the education department adopted minimum standards for sanitation in SA’s schools, as many as 3,800 still rely on pit latrines 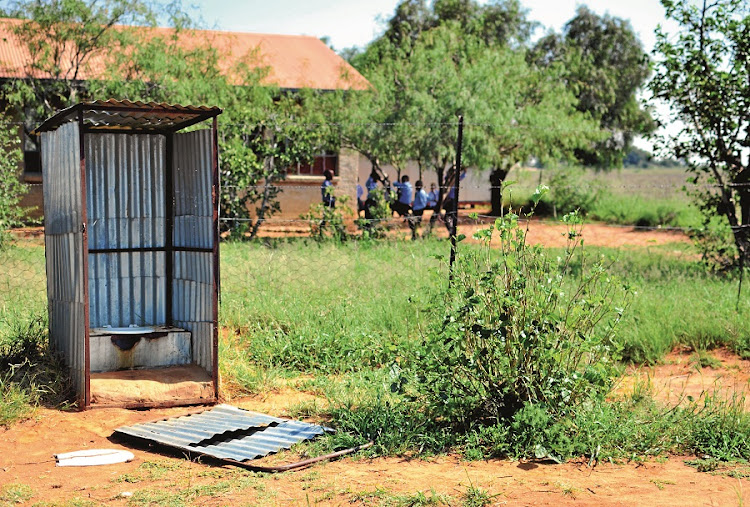 On July 26, basic education minister Angie Motshekga sketched out her priorities in her budget vote speech in parliament: numeracy and literacy; the introduction of skills-based subjects such as aviation and maritime studies; internet connectivity; the fourth industrial revolution. But such promises may ring hollow for the thousands of pupils who still lack access to basic infrastructure.

Five years after Michael Komape, 5, drowned in a pit latrine at his school in Limpopo — and a year after Lumka Mthethwa, 5, met the same fate in the Eastern Cape — there are still 3,800 schools at which pupils have to use unsafe pit latrines.

It’s a marked improvement on the 11,000-odd schools reliant on pit latrines in 2011, according to the "National Education Infrastructure Management System" report of that year. But it’s still at odds with the norms and standards on school infrastructure adopted in 2013. Those regulations prioritised infrastructure upgrades at schools "that do not have access to any form of power supply, water supply or sanitation", stipulating a three-year timeframe for compliance. That would have been late November 2016.

Section27, a public interest law organisation, has been vocal about the government’s inaction. It first raised the issue in 2012.

"We then began an ongoing campaign … in an attempt to raise awareness of these issues and get the [national and Limpopo education] departments to move on a plan to improve the situation," it says on its website.

Section27 attorney Samantha Brener adds: "While Michael’s name is mentioned often when school infrastructure and sanitation are discussed by political officials, we have yet to see adequate prioritisation of this issue in the implementation of solutions. [That] schoolchildren are still forced to use pit latrines at school should be a source of collective shame to be remedied with utmost urgency."

Activist organisation Equal Education has been similarly critical. "The deadlines stipulated in the norms and standards … are not loose targets, and they are not mere promises — they are legally binding," says head of communications Leanne Jansen-Thomas. She refers to an order of the Bhisho high court, which found the department’s delays in fixing unsafe and inadequate infrastructure to be unconstitutional and invalid.

But education department spokesperson Elijah Mhlanga takes a different view. The 2013 norms and standards document "is not a plan; it’s a regulatory document in which various targets are set towards delivering various things. The general understanding … is that we’d meet our deadlines with regards to everything, which is wrong," he says.

But he does acknowledge that some deadlines have been missed — something he attributes to a lack of funding at the time the norms and standards were adopted, as well as last year’s R3.5bn budget cut by then finance minister Malusi Gigaba.

Given the severity of the delay, President Cyril Ramaphosa announced the Sanitation Appropriate for Education initiative last August. Despite a lack of detail about the plan, the department is convinced the pit latrine problem will be solved within three years. It says R800m has been set aside for that period, with R1.3bn allocated for the final year of the project. It’s already focusing on upgrading infrastructure at 606 schools.

"We are confident that … [the eradication of pit latrines] is going to be done by the end of the 2020 financial year," says Mhlanga. "The first thousand will be done by the first quarter of next year and then we’ll start the second thousand."

But for the children subjected to such dangerous conditions, the problem requires more immediate intervention — and nongovernmental actors are stepping into the breach.

Radio and TV presenter Anele Mdoda was particularly moved by Mthethwa’s death last year. "I have become a lot more protective of kids since I became a mom, [and] I want other moms to think of my son as well," she says. "This is why we have to do something."

In a push for change, Mdoda, in partnership with cleaning supplier Domestos, aims to build 20 new toilets in schools in her home province, the Eastern Cape, this year, and raise a further R1.1m to tackle the problem in other provinces. The project broke ground at Thembalethu Primary School in Lusikisiki in April.

Jansen-Thomas acknowledges the need "to muster all resources — public and private — for [government] to fulfil its obligations".

And the education department itself welcomes such intervention — the National Education Collaboration Trust was created specifically to co-ordinate private sector contributions, says Mhlanga. "The department alone does not have the capacity to take care of [over] 400,000 learners in 25,000 schools."

Brener, however, expresses disappointment that the situation "has been allowed to remain so desperate, for so long, that individuals and the private sector feel compelled to step in … The safety and adequate education of learners in SA is the clear constitutional responsibility of the national and provincial departments of education."

The basic education department is discussing  financing options so that at least 606 schools will be provided with sanitation by the end of the ...
National
2 years ago
Next Article

1.
Omicron ultimatum: the end of lockdowns and ...
Features / Cover Story
2.
CHRIS ROPER: Decoding the gospel of ‘healer’ ...
Features
3.
Has the Reserve Bank moved too soon on rates?
Features
4.
Just what is SA’s bank of the future?
Features
5.
Behind the long, long wait for a Zimbabwean ...
Features / Africa

Initiative aims to put an end to pit latrines

Initiative aims to put an end to pit latrines

1.
Omicron ultimatum: the end of lockdowns and ...
Features / Cover Story
2.
CHRIS ROPER: Decoding the gospel of ‘healer’ ...
Features
3.
Has the Reserve Bank moved too soon on rates?
Features
4.
Just what is SA’s bank of the future?
Features
5.
Behind the long, long wait for a Zimbabwean ...
Features / Africa

Court orders fresh decision on how to hold Ramaphosa ...

PETER BRUCE: Hell! If we can survive ANC rule, we can ...

Omicron ultimatum: the end of lockdowns and beginning ...