Ramaphosa has to do one thing and one thing only: let the axe of the law enforcement agencies fall wherever malfeasance has been identified and proved 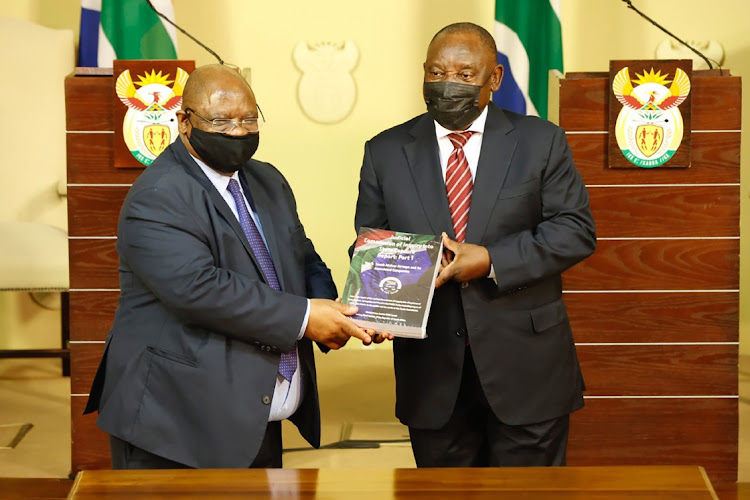 Acting Chief Justice and chair of the commission Raymond Zondo hands over part 1 of the report to President Cyril Ramaphosa at the Union Buildings in Pretoria. Picture: THULANI MBELE

The handover to the president of the first part of the Zondo commission’s report on state capture presents a massive opportunity for renewal and restoration of hope and dignity for our country. It holds the possibility of turning our declining, depressed country into the prosperous, respected and dignified entity it once had the potential of becoming before it was so comprehensively stolen during the Jacob Zuma administration.

President Cyril Ramaphosa, whose four-year-old messages of renewal have failed to materialise, now has a great chance to rise to the occasion. For that to happen, he has to do one thing and one thing only: let the axe of the law enforcement agencies fall wherever malfeasance has been identified and proved.

The report’s release should not be accompanied by overly long consultation sessions or reflections. Criminal charges should not wait for June, when the president is due to address Parliament on how the report’s findings will be implemented. That is not what a desperate nation wants.

The country has heard the testimonies of witnesses at the commission, the arguments and summations of legal representatives, and the numerous reflections of commentators about what the presentations have meant. Ramaphosa himself has heard numerous views from his advisers about each scenario that may have been presented by the commission’s final report and what it would mean. Ramaphosa now needs to act.

Already, it is clear just from the first part of the report that much of what we have long suspected or known has been found to be true by the commission. For example, reporters have for nearly a decade reported on the fraud and corruption at SAA – leading to its collapse – during the tenure of Zuma’s friend Dudu Myeni. The report says: “SAA declined during the tenure of Ms Myeni to an entity racked by corruption and fraud. Despite this, she was retained as its chairperson well beyond the point at which she should have been removed.”

It’s not just SAA that was corrupt. The commission found that state capture “thrived” at state-owned enterprises and government departments. It particularly lists corrupt contracts between the Gupta newspaper The New Age’s breakfasts and subscription deals with Transnet, Eskom and SAA.

It is worth stopping here and reflecting on the fact that these three enterprises all collapsed under the Zuma administration and it is up to the Ramaphosa administration to fix them. Our country was stolen, right and proper.

So there is no need to tarry. The conclusions of the Zondo commission are based on solid evidence which is enumerated in the reports and in testimony and documents that were brought before the commission. Prosecute. Now.

The opportunity to shine is not just Ramaphosa’s, a man whose greatest contribution to our country now would be to let justice run its course. The chance for law enforcement agencies to emerge from years of the shame of state capture is real and should be grabbed with both hands by their leaders. There has been much criticism of National Prosecuting Authority (NPA) head Shamila Batohi, for example. With the work that the Zondo commission has already done for the NPA, the authority has a chance to shine and restore some hope among battered South Africans that this is indeed still a country of laws.

Tuesday’s release of the report’s first part has already yielded a lot to ponder and act over. More will come with the release of the second and third sections later this month and next month.

Expect a lot of political noise over these reports in the next year. The ANC, which Ramaphosa leads and whose leadership he was an integral part of since 2012, was the accused at the Zondo commission and is the guilty party in these reports. Myeni, for example, was an integral part of the former president’s machinery. So was the Gupta family. So, too, were thousands of party leaders and apparatchiks.

With an ANC elective conference due in December, this report becomes not just the most important political report of the Ramaphosa administration, but the biggest political hot potato of this year. Many in the ANC will try to undermine it, as they have already attempted with the defiance of the commission, and many will attempt to cause havoc similar to what we saw in July 2021 to try and avoid liability for their deeds.

Let it work for the people – immediately. The long-term goal is to follow Zondo’s key recommendation for “a single, multifunctional, properly resourced and independent anticorruption authority with a mandate to confront the abuses inherent in the present system”.

For now, though, criminal charges please.

Read the part 1 of the state capture report below.

Acting chief justice Raymond Zondo is due to hand over the first of three parts of the report to the president at 3.30pm
National
1 week ago

Starting point for any scheme of reform must include the establishment of a single, multifunctional, properly resourced and independent ...
National
1 week ago
Next Article

Heineken may sell Strongbow in SA to get Distell deal ...

Adapt IT to steer ship after takeover, says Volaris