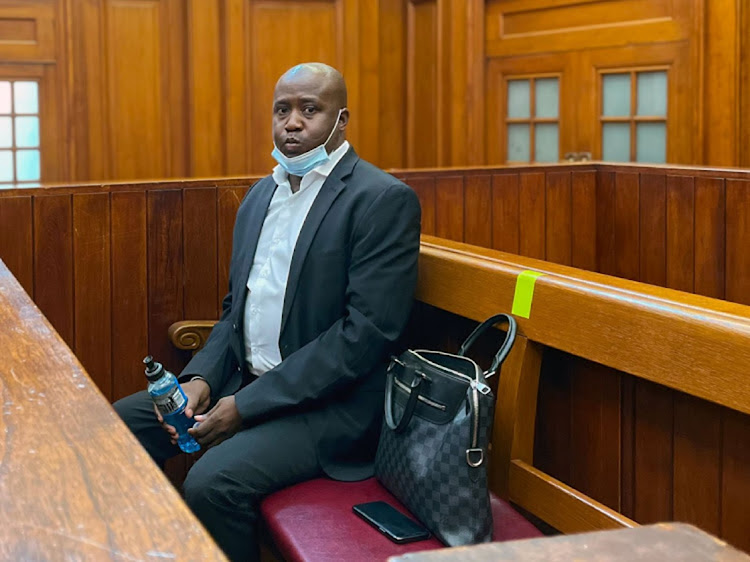 Former state security minister Bongani Bongo at the high court in Cape Town on the first day of his corruption trial on February 15 2021. Picture: Anthony Molyneaux

The radical economic transformation (RET) faction of the ANC could hardly have been more giddy with joy after judge John Hlophe dismissed the corruption case against former state security minister Bongani Bongo on Friday.

Bongo was charged with corruption for allegedly telling advocate Ntuthuzelo Vanara, the evidence leader in a parliamentary investigation into Eskom, to “name a price” to sabotage that probe in October 2017.

On Friday, however, Hlophe dismissed the case, agreeing with Bongo’s lawyers that there was no evidence on which a court would reasonably return a guilty finding.

The implications of this ruling, politically and legally, couldn’t be more significant.

Politically, Bongo’s case is a proxy for the legal issues hanging over many other ANC top brass, including secretary-general Ace Magashule, who have been asked to “step aside” from their positions. Hlophe’s ruling will be used as a club against that “step aside” principle.

Predictably, Bongo crowed after the ruling that the case was part of a political hit by his opponents. “State institutions are again being used to settle political scores against those who differ from a certain clique in the governing party,” he told City Press.

Without skipping a beat, he said his vindication showed why Magashule shouldn’t step aside from his post.

“The charges against him are weak, they don’t make prosecutorial sense, and they’re simply drafted to enlist political pressure on him to step aside, so that others are able to capture the soul of the ANC,” he said.

It’s a conspiracy theory that doesn’t stand up to the barest scrutiny.

In Magashule’s case, there’s the small matter of a missing R255m, which disappeared as part of the asbestos eradication contract granted by the Free State government during Magashule’s term as premier. And the indictment spells out payments of R800,000, made by the companies which won the contract to entities nominated by Magashule.

Political analyst Ralph Mathekga tells the FM that it’s entirely wrong to extrapolate the Bongo ruling to suggest a similar outcome would be likely in Magashule’s case. “The cases are substantively different. Of course, it’s not surprising that a certain faction would claim this shows a political conspiracy, and even to suggest that Jacob Zuma would be vindicated over the criminal charges he faces — but that’s a stretch,” he says.

Actually, it doesn’t even mean Bongo is off the hook either.

Mpumelelo Zikalala, chair of the KwaZulu-Natal branch of the Black Lawyers Association, says it’s unlikely that the state will leave it there.

“I don’t think the state will take Hlophe’s ruling lightly. They’ll probably ask the Supreme Court of Appeal to relook at this. So, it definitely doesn’t mean his court troubles are over, unless the state decides not to appeal,” he says.

And, as Mathekga points out, this is just one of two criminal complaints that Bongo is facing. Next month, he is due to appear in court to face criminal charges over allegedly corrupt land deals, which saw R121m frittered away.

So are there grounds to appeal? Legal experts think so.

James Grant, advocate and former legal professor at Wits University, says Hlophe’s reasoning in his ruling were “sometimes right, but at other places, either bad or strained”.

“He is right that Vanara was a single witness, and that one must be cautious when dealing with a single witness,” he says. But when you’re deciding whether to discharge criminal charges, “the credibility of a witness is not an issue unless his testimony is preposterous”. Which wasn’t the case with Vanara.

One of Hlophe’s reasons for dismissing Vanara’s testimony is that anyone who has been offered a bribe of more than R100,000 has a legal duty to report that offer to the police — which Vanara didn’t do.

“But in this case, the amount was not specified, so the incident falls into a grey area,” says Grant. “That seems to be all there is against the credibility of the complainant’s evidence, and yet the judge takes into account his credibility. That seems strained to me.”

In his ruling, Hlophe argues that Bongo couldn’t have offered a bribe, since Vanara didn’t have the authority to collapse the Eskom commission by himself.

“This is wrong in law, and could be a possible basis on which the state can appeal,” says Grant. “It is not necessary that what one improperly seeks is possible, but it’s enough to meet the requirements for an attempted bribe if you make an improper offer at all.”

Certainly, Vanara hasn’t recanted anything. Speaking to News24’s Karyn Maughan after the ruling, he said his conscience was clear.

“I know what happened when I was offered a bribe and reported the incident to parliamentary officials,” he said.

“It’s baffling that he insists that Vanara’s testimony is not credible, even as he recognises that Vanara [relayed] his concerns regarding Bongo’s approach at the time of the approach to several witnesses,” she says.

As much as it would be nice to analyse this judgment in pure legal terms alone, the identity of the judge in this case contaminates any discussion.

The fact is, Hlophe himself is awaiting the outcome of a Judicial Service Commission (JCS) hearing into his own conduct, in an incident with an eerie similarity to the Bongo case.

This dates back to 2008, when retired Constitutional Court justices Bess Nkabinde and Chris Jafta claimed that Hlophe had tried to influence them, when the court was deciding a search and seizure case involving former president Jacob Zuma.

And yet, bizarrely, Hlophe, as the judge president of the Western Cape, decided that he’d take this case.

Fritz points out that Hlophe has presided over precious few matters in recent times — let alone a politically charged criminal matter. “Why would he suddenly allocate this particular matter to himself?” she says.

She says it’s hard not too read the Bongo judgment as having a double meaning: to exonerate Bongo and as a template for how the complaint against him should be reasoned.

“By saying there’s insufficient evidence in the Bongo case, the subtext of the judgment suggests there’s also no merit in the charge that Hlophe improperly approached the judges. Which, I believe, is nonsense,” she says.

Mathekga says that were this ruling delivered by pretty much any other judge, it wouldn’t have raised the cloud of suspicion it has in this case.

“He’s not just any judge. Hlophe is someone who is dealing with an inquiry into his own conduct that is remarkably similar to the Bongo case,” he says.

“The problem here is, there’s a cloud over Hlophe precisely because the JSC didn’t expedite its case against him. Had it reached a decision, there wouldn’t be so much suspicion over this ruling.”

It must be said, however, that the National Prosecuting Authority (NPA) didn’t make it easy on themselves.

During the trial, two parliamentary officials, who had been called as witnesses by the NPA, simply failed to pitch at court. This infuriated Hlophe, who said the witnesses “didn’t take this seriously … nobody wastes my time”.

The faultlines in the entire judicial apparatus, in other words, run deep.

The assault on the ‘step aside’ rule

As was evident from the fact that Bongo wasted no time using his “vindication” to lambaste the ANC’s “step aside” rule, those accused of wrongdoing will make hay from Hlophe’s ruling.

It hasn’t helped that the judgment has been received in an intensely factional way.

Those who’ve faced their own political tornadoes, with an axe to grind against the judiciary, have resoundingly welcomed the ruling.

Tony Yengeni (jailed for fraud in 2006) said: “Judge President John Hlophe for chief justice”; Andile Lungisa (sentenced to jail for assault in 2018) said: “When we fight for [the] innocent until proven guilty principle, we know our story.”

Even the periodically orphaned Carl Niehaus said: “This just proves how awfully wrong it is to demand that anyone must step aside on the basis of mere allegations and charges.”

Expect more of the same from the irretrievably compromised in the next few days.

Zikalala says Magashule will certainly use this ruling to bolster his argument that he be allowed to remain in his position in the ANC, and deal with his legal cases from that vantage point. “Ace will say: ‘The integrity commission wants to strip me of my duties, but what will happen when I’m found not guilty?’” he says.

“That rule doesn’t presume you’ll be found guilty by a court at all. Rather, it is there so that the party can have people in public positions without any baggage,” he says.

That may be true, but that probably won’t matter to the conspiracy theorists, for whom the small matter of R255m missing in the Free State is a forgettable footnote.

For them, Hlophe’s ruling will be a welcome political battering ram against the anticorruption agenda of President Cyril Ramaphosa. An appeal against this judgment, if only to remove the suspicion over Hlophe’s ruling, is vital.

ANC members’ reluctance to implement the step-aside rule stems from the fear that it will be used against them in future. It’s a concern that cuts ...
Features
11 months ago
Next Article