The uproar has focused on the minister, but a bigger problem is that the public service is steeped in an insidious culture of bad ideas 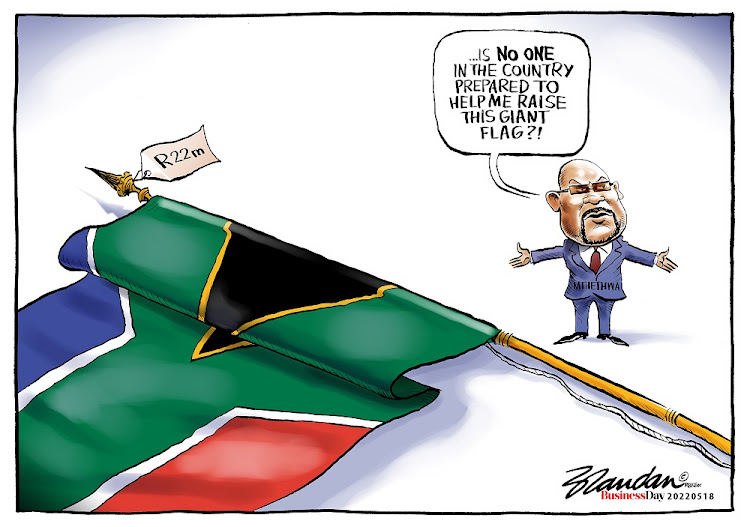 The Nathi Mthethwa flag saga is the perfect example of what is wrong with our politics.

It has taken a public uproar for him to ditch the idea (forget that he has decided to “review” the project as — politicians always use fuzzy words in such situations to save face). That a minister of state could go on national television and defend the blatantly indefensible says a lot.

Mthethwa, the minister of sports, arts & culture, told JJ Tabane on eNCA that the R22m flagpole would stimulate the “steel industry”. It did not take long for some to point out that only the “steal industry” would benefit.

SA has a cabinet system, with the president at the helm. A minister like Mthethwa has as much interest in the affairs of the nation as, say, the defence minister. The sports minister should be competent in public affairs so that they are comfortable with serious and public policy topics.

The cabinet sanctioned the Monumental Flag project. You have to wonder what the other 27 ministers thought when the project was presented for approval.

Each minister gets a cabinet meeting pack, with all the details of the decisions suggested from across the portfolios of the national government. Cabinet documents are standard forms on which policy sponsors state what the policy implications are. Cabinet papers are churned out by the administrators and these papers are pushed up the chain all the way to the directors-general (DGs), who ultimately sign the cabinet meeting pack, alongside the minister. They also attend and address cabinet meetings.

The uproar has focused on Mthethwa, the executive authority. The DG of his department has not said a word in public. Yet DGs are the accounting authority. The financial buck stops with them. There is not a single expenditure that politicians can push through without their DG’s approval.

What this saga demonstrates is the dearth of both wisdom and common sense in the public service. It shows that our administration is steeped an insidious culture of bad ideas — and possibly corrupt ones. Our civil service has not been freed from state capture. It has been freed only from the brazen Zupta state capture.

In fact, President Cyril Ramaphosa is at the helm of the same party that enabled the Zupta culture, and his cabinet contains people who cultivated the ground for state capture.

SA needs to free the administration of the country from politicians. Their job is to oversee policy issues; administrators have a duty to implement those policies in a professional manner.

The flagpole saga is just an example of a typical day in Pretoria. The ANC will claim its leaders listen and that is why they gave in to public pressure

In SA, we focus a lot on the separation of powers doctrine in so far as it implements checks and balances among the three arms of government: the executive, the legislature and the judiciary. But there also has to be a visible distinction between the executive layer and the administration.

The dominant view is that the buck stops with the ministers as executive authorities. That is true and not true. DGs and the people they lead have distinct duties and responsibilities. In the current situation where the distinction is not properly examined by the commentariat, DGs are left to account only to parliament.

That set-up is flawed as the ANC runs rings around the system, denuding the legislature of its independence. Take for example the ANC’s institutionalisation of the “study group” model, where departments meet with MPs before committees make a mockery of public official meetings of parliamentary structures and events. This practice took root during the heyday of our one-party politics, when the ANC was in the comfortable upper 60s in terms of the share of votes.

The culture still dominates even though it is clear to everyone but the ANC that the party will fall below 50% in two years. But then, because of all the bad habits and tricks that have been ingrained, it will take decades to pull the civil service out of the morass it finds itself in.

The flagpole saga is just an example of a typical day in Pretoria. The ANC will claim its leaders listen and that is why they gave in to public pressure.

I could write reams on the government’s dereliction of duty when it comes to sports and the arts. It is a serious portfolio, with the potential to to make a big contribution to our development ideals.

One example of that dereliction is the death of school sport in most state schools. SA soccer is the most obvious casualty. Under apartheid, schools produced excellent soccer players. Doctor Khumalo, who was part of the team that won the 1996 Africa Cup of Nations, came from Daliwonga High in Soweto. The ANC government has dismantled all that infrastructure, leaving sport development to gangsters who run soccer clubs and football federations.

Sports like rugby and cricket continue to produce global stars, thanks largely to former Model C and private schools that have managed to sustain these codes. It is schools like Paarl Gym, Paul Roos, Grey and St Stithians that feed our rugby and cricket success, except in a few cases, such as Lukhanyo Am and Makazole Mapimpi, who burst onto the international scene without attending top schools.

Mthethwa should pay attention when his economic cluster colleagues next discuss ways to help our steel and manufacturing industries at a cabinet meeting. But considering his inability to “get” the obvious, maybe not. He might just spoil that conversation too.

We should focus on ways to improve public accountability and build a strong bureaucracy because some politicians may be beyond redemption.

* Mkokeli is lead partner at Mkokeli Advisory. He served as public enterprises spokesperson until November 2020

On Thursday, the department of arts and culture said minister had asked his ministry to review the process related to the flag, after loud criticism
National
1 month ago

If we build a R22m flagpole, we might not know if there will be wind to flap it, or whether it will adhere to proper building standards
Opinion
1 month ago
Next Article