Air base robbery with a different angle 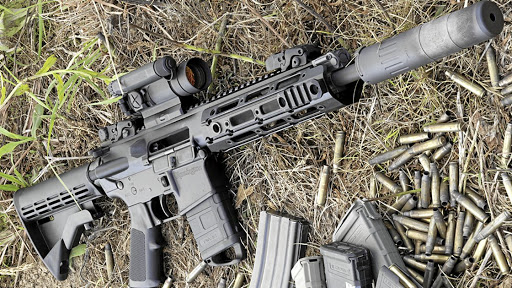 Pilfered: Assault rifles are regularly spotted when the cops show off the weapons recovered from robberies. Picture: Oleg Volk

These arsenals, the residents said, would be used to rob banks and commit other crimes now that they were no longer needed to overthrow the regime. Indeed, the AK-47 did for a while pop up frequently in cash-in-transit van heists.

These days, however, the weapons involved are much more likely to have been supplied out of SA National Defence Force armouries. There has been more than a steady trickle of weapons travelling from armoury to street. R4 and R5 assault rifles are regularly spotted when the cops show off weapons recovered from house raids and foiled bank robberies.

In 2019, a spot check on the armoury at the army engineers’ base near Pretoria found that 19 R4s had been stolen by troops and sold.

In the late 1990s, white supremacists managed to pilfer thousands of rounds of ammunition out of the Bloemfontein armoury.

The thieves succeeded because there were apparently no guards around to stop them.

So it comes as no surprise to hear that the air force base at Hoedspruit was raided over the weekend. The thieves used an angle grinder to cut through the bars of an office window, and stole cash and unnamed "other valuables".

Can you imagine the sound an angle grinder makes on a Sunday morning in the quiet bushveld town of Hoedspruit?

On the upside, there is no mention of any weapons being stolen. Perhaps there were none left to steal.