Planet Earth is a tinderbox

Wildfires are going to figure greatly in our future. They are getting stronger and longer and more intense 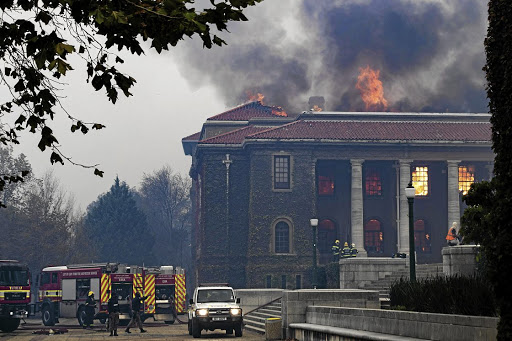 Up in flames: UCT’s Jagger Library on fire this week. Picture: AFP/Rodger Bosch

Probably not, because humans don’t like to think of such limitless catastrophe. Think of all that knowledge reduced to ashes and smoke and carried off in the same roaring southeaster that helped whip this fire into a frenzy in the first place.

It’s possible that veterans of the #RhodesMustFall struggle cheered to see flames engulf the Rhodes memorial and its eponymous statue, not to mention the very Dutch windmill down the hill.

As a metaphor for cleansing a place of colonial relics, you can’t do better than a firestorm. Too bad about the books, though.

On Tuesday, the rising sun glowed horribly through a smoke-laden sky. It looked like the poster for Apocalypse Now. The scene was quite literally amplified by Bell UH-1 "Huey" helicopters dropping "Bambi" buckets of water onto the blaze. The Hueys, with that distinctive thudding sound of their long, fat rotor blades — the soundtrack of ’Nam — fly from reservoir to mountain and back again to hurl their flimsy buckets of water in a Sisyphean task.

Wildfires are going to figure greatly in our future. They are getting stronger and longer and more intense. Just ask the Californians. The French, Spanish and Americans use large fixed-wing aircraft to fight their fires — the Yanks even have a converted Boeing 747, which is expensive to operate but does the job of frightening fires into surrender. The greater payload carried by conventional planes usually makes up for the turnaround time of having to operate from normal airports.

Firefighting on this scale should be a matter of civil defence. Regrettably, this is unlikely to ever appear in the defence budget given that the budget doesn’t even buy enough fuel to keep all the Gripen fighter jets in the air.

A cursory glance at UCT's website made me think, with apologies to Joni Mitchell, that we don’t know what you’ve got till it’s gone
Opinion
3 months ago
Next Article