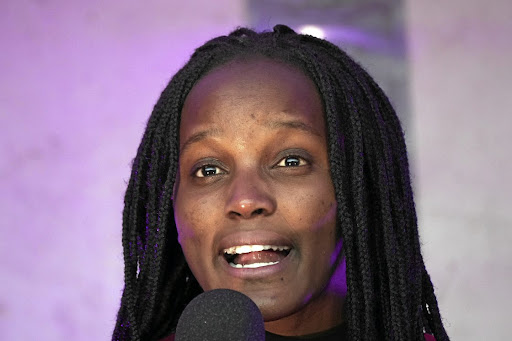 Vanessa Nakate posed for a photograph in January 2020 that would make her famous overnight, but not as famous as one of the other four people in the picture.

Nakate stands on the edge of the group. In the middle is Greta Thunberg, the Swedish teenager and climate change campaigner, who Nakate says inspired her to become a climate activist.

The photograph, taken by Markus Schreiber of the Associated Press (AP), showed five young people who had gone to the World Economic Forum in Davos to plead the case of young people on a planet threatened by climate change. When the AP distributed the picture, however, Nakate’s image had been cropped out by an editor.

On her flight home, Nakate tweeted a video about the change to the picture, weeping as she spoke and accusing the global environment movement of racism.

By the time she landed back home in Uganda, there was a global outcry. The editing of the picture led to apologies from the AP, which immediately instituted diversity programmes for staff. Nakate had been the only black person in the photograph.

Last week at COP26 there was no question of Nakate being left out. And she repeated her message from Davos in Glasgow: her continent (Eskom and Sasol aside) bore relatively little responsibility for climate change but was suffering the full consequences. "We are in a crisis," she told a group of protesters on Friday. "We are in a disaster that is happening every day."

If that sounded like alarmism from a young campaigner, she also offered some optimism for what could happen if world leaders took action.

"The farms can blossom again. The animals can rejoice, because there is water to drink. There is a loud singing in once parched lands. The pain and suffering are gone," she said, according to The New York Times.

"We won’t have to fight for limited resources, because there will be enough for everyone.

"Historically, Africa is responsible for only 3% of global emissions, but Africans are suffering some of the most brutal impacts fuelled by the climate crisis.

"We need to continue holding leaders accountable for their actions," she said. "We cannot keep quiet about climate injustice."

Nakate turns 25 next week and her book, A Bigger Picture: My fight to bring a new African voice to the climate crisis, will be out later this month. Very soon Nakate, once not as famous at Thunberg, could become equally famous — in Africa at least, where she is the new face of the campaign against climate change.

There’s a renewed focus on efforts to limit global warming and ensure a ‘just transition’ away from dirty fossil fuels. It may look like a ...
Features
3 weeks ago

Court joins Dikgang Moseneke and six others to the ...

Collaboration key to sustainable financing and a just ...

SHABIR MADHI: What SA should do about Omicron now – ...