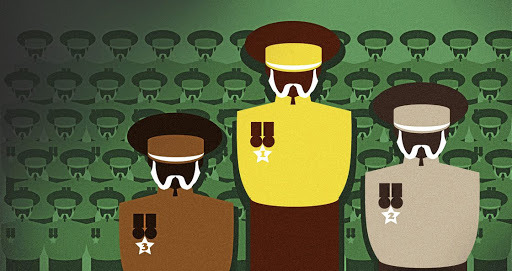 While the column begins with a novel proposition — the creation of a strongman/strongwoman metric to measure the brutality meted out by government officials across the globe — it soon degenerates into a diatribe about the DA and its leader John Steenhuisen.

Roper rightly points out that Africa is the worst hit when it comes to the presence of strongmen in government, as well as the frequency of human rights abuses, citing Ethiopia, Mozambique and Uganda, and speaking to the length of tenure of some of Africa’s most brutal dictators.

He then attempts to juxtapose these examples against the SA context, asking: "I know what you’re thinking. Where did SA go wrong? How can other countries produce strongmen, but we have milquetoast presidents who give up when their terms end or they are recalled by their party?"

The implication is that we as South Africans don’t have it as bad as the rest of Africa and we should be grateful that the benevolent ANC tends to recall its presidents prior to the expiry of their terms. However, he fails to touch on the imminent threats to our democracy, such as the expropriation of land without compensation, nationalisation of the Reserve Bank and the State Security Agency’s apparent forays into judicial and journalist capture.

Surely these are an indication of SA’s slide towards a more authoritarian brand of government?

But Roper’s wilful ignorance really reveals itself when he begins with the anti-Steenhuisen tropes. He criticises the fact that Steenhuisen characterised Ramaphosa as an effective dictator who has led South Africans into being one of the most travel-restricted peoples, locked down by an authoritarian government and locked out of economic opportunity.

It’s as if he has suffered from selective amnesia, forgetting the kind of treatment meted out by the national coronavirus command council (NCCC) — a body designed to centralise decision-making power in the executive. Maybe he is okay with living in a perpetual state of disaster?

While the initial hard lockdown was necessary to build up health-care capacity, the government failed to do so. Instead, this was the first of many impositions on people’s freedoms.

Under the state of disaster, we have seen freedoms progressively diminished. It started with petty punishments, such as the security forces compelling citizens to do push-ups for contravening regulations. Not long after, this resulted in the brutal murder of Collins Khoza. Strange how what seemed trivial in the beginning resulted in state-sponsored violence against its people.

What about the severe restrictions imposed on people’s ability to protect their livelihoods? The banning of roast chickens, open-toed shoes, alcohol and cigarette sales and e-commerce may have seemed trivial too. But SA now sits at a record 32.5% unemployment (42.6% on the expanded definition). Many business owners who were compelled by the government to shut up shop were then told they did not qualify for relief funding as they did not comply with race-based requirements.

Not just intent on brutalising people or stripping them of their livelihoods, the NCCC limited freedom of movement too. This included the inability to see our dying relatives or visit well-ventilated outdoor spaces.

How does one explain away the fact that this very same clientelistic governing party stole money meant to save lives and livelihoods?

The last assertion by Roper is that the DA should have focused on the government’s inability to develop a clear and effective vaccine strategy instead of on Ramaphosa’s leadership. Well, we did that, too. The DA was the first party to highlight the challenges SA faces in procuring vaccines. We also initiated legal action for the government to explain how it will handle the rollout.

I have a pearl of wisdom to share with Roper before he conceives his next anti-DA diatribe in his basement. As per social commentator Steven Pinker: "Unfortunately the epistemological standards of common sense — we should credit the people and ideas that make correct predictions, and discount ones that don’t — are rarely applied to the intelligentsia and commentariat, which dispense opinions free of accountability."

We will continue to hold you accountable for the drivel you pass off as analysis.

A ‘Corruption Olympics’ would give real meaning to a contest between strongmen and strongwomen. SA is a bit off the pace on this count, though the DA ...
Features
6 months ago

The DA-controlled provincial government has long called for the devolution of powers especially over policing, energy and transport
National
6 months ago
Next Article

Spur considers next move as loss in tax case shocks ...