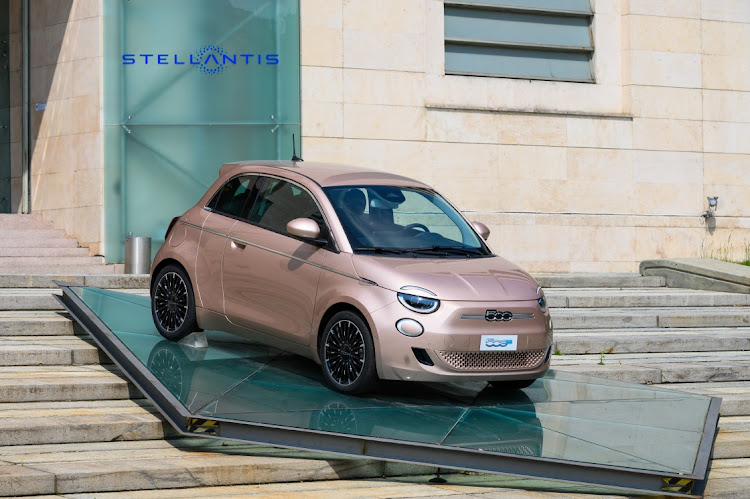 A Fiat 500 at the headquarters of Fiat Chrysler Automobiles, now part of Stellantis in Turin, Italy. Picture: Giuliano Berti/Bloomberg

First it was Peugeot, with a dash of Citroën. Then came Opel. Now there’s also Fiat, Alfa Romeo, Abarth and Jeep. If Leslie Ramsoomar thought he had a straightforward path ahead of him when he was appointed MD of Peugeot-Citroën SA (PCSA) in February 2020, he’s been continuously disabused of the idea.

Even the company he joined no longer exists. Following the recent merger between French group PSA and Italian-US conglomerate Fiat Chrysler Automobiles (FCA) to create the Stellantis group, he’s now head of the wholly owned SA subsidiary of the same name. His job is to turn underperforming components into a successful whole.

When the former Nissan and Renault executive joined PCSA last year, the Citroën brand had only just returned to SA after a three-year absence caused by lack of demand. He barely had his feet under the MD’s desk when Covid lockdowns turned the new-vehicle market on its head. In a way, the timing was fortuitous. It allowed him and his management team time to consolidate and plan a way forward. New dealerships were opened and market share increased – albeit off a painfully low base.

Opel was added to the mix in January this year. It had been distributed in SA by an independent dealer group after General Motors (GM), the previous owner, disinvested from SA at the end of 2017 and subsequently sold the brand to Peugeot.

The SA subsidiary had barely begun to swallow Opel before the Fiat Chrysler merger in mid-January added more brands to its plate.

Sales and marketing head Brian Smith says all Stellantis SA brands present different challenges. Peugeot, the main local seller, and Citroën are premium brands but have to shake off what he calls their “legacy reputation” for poor after-sales service. Most of the problems occurred when the brands were represented by independent importers. “Now we are a fully owned Stellantis subsidiary, we have the full commitment of the parent company behind us,” he says.

Opel cars, despite no longer being built in SA, still enjoy a strong local brand image. So does Jeep. The same can’t be said for Fiat and Alfa Romeo, which have done little to excite in recent times. Ramsoomar says: “We have some work to do to get Alfa’s brand image back where it should be.”

Fiat Chrysler brand plans will be confirmed “once the merger is embedded and we have a clear picture of where we are”, says Ramsoomar. However, he says, the eventual aim is 7% market share for the enlarged group. He hopes the unified management structure will be in place in May and “that we will be fully operational by the end of the year”.

Once that happens, the luxury DS French brand could also return to SA.

When GM owned Opel, exports of SA-made catalytic converters to car plants in Europe enabled the company to claim reduced duties on imported cars, under the government’s automotive incentive policy. Those exports – and the accruing benefits – continue under Stellantis. However, another potential duty benefit is proving elusive.

In December 2018, Peugeot’s French parent company opened an assembly plant in the Namibian port city of Walvis Bay, to build cars for SA and other Southern African markets. Under regional customs rules, it was hoped they would be allowed duty-free entry into SA.  More than two years later, regulatory issues are still being argued over and no cars have been delivered.

“We have received nothing and I don’t know when we will,” says Ramsoomar. “It’s a matter for France and the Namibian authorities. We are not involved in any way.”