A cursory glance at UCT's website made me think, with apologies to Joni Mitchell, that we don’t know what you’ve got till it’s gone 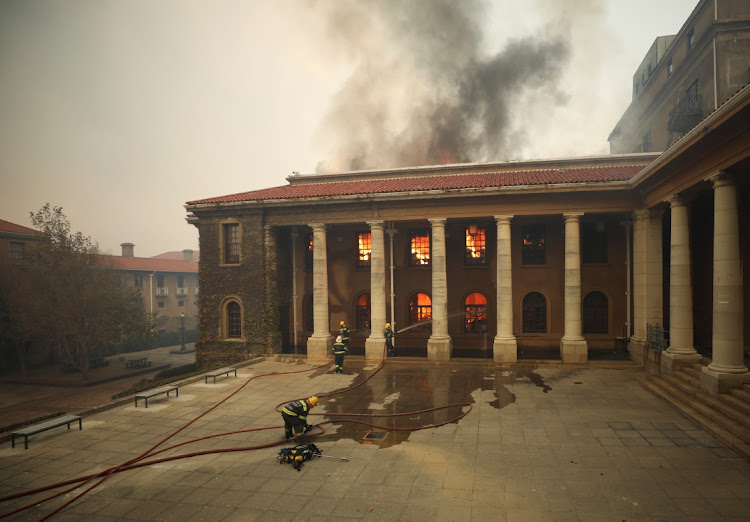 Firefighters battle flames engulfing the University of Cape Town library and the Special Collections library on Sunday. The runaway blaze, which started on Table Mountain, also engulfed the Rhodes Memorial restaurant and Mostert Mill, which was built in 1796 and was the oldest surviving working windmill in SA. Picture: MIKE HUTCHINGS/REUTERS

It is too early to comprehend the full impact of the fire that raged across Table Mountain on Sunday, straying onto the University of Cape Town’s upper and middle campuses and damaging and destroying buildings in its path.

Hardest hit, it seems, was the Special Collections Library (or Jagger Library). Photos showed the building, which dates back to 1930 when it opened as the university’s main library, as an apocalyptic tip of still smouldering fire and debris. It may be that some parts of the collection were saved by fire doors and sprinklers, but it doesn’t look good.

As a UCT alumna, and a Humanities one at that, I am ashamed to admit that I know almost nothing of this specialised library space. A cursory glance at its website hints at what we may have lost. It made me think, with apologies to Joni Mitchell, that we don’t know what you’ve got till it’s gone.

The Special Collections Library was home to books, art, maps, pamphlets, photographic collections, newspapers, audio recordings and videos. It was a bastion of stories, memories and data relating to South Africa and the wider continent. For example, the African Studies Book Collection included imprints from all over Africa and a Kipling and Antarctic collection.

“The collections are especially strong in gender studies, media studies, HIV/Aids issues, and debates around the character of African studies as a discipline,” the website detailed. “There is an important collection on Southern African languages, donated to the university in the 1950s, which includes religious texts and school textbooks as well as dictionaries and grammars. Some of the titles in these collections, published in the 19th and early 20th centuries, are extremely rare.”

But rattling off a list of items you’d have found there only gets you so far. Instead, here are some thoughts on the significance of this library from those who knew it well and used it, whom I managed to contact this week. From what they say, it’s clear we’ve lost an invaluable national treasure.

This was one of the most important libraries on the continent, especially in terms of its priceless audiovisual collection. There were hundreds of African films, and audio archives that are hard to find anyway in a single library. The Special Collections Library housed the archive of the anti-apartheid struggle...the UDF in particular.

One would hope that some of these materials have been salvaged. The loss of the library is a huge setback for research in Africa. It will be a miracle to have another one like it in the near future.

South Africans have lost some of the most important archives pertaining to the colonial encounter and one which would, in the age of decoloniality, offer valuable information for a reconfiguration of knowledge production. The scale of material lost is tragic. The unfortunate event marks an epochal moment in the intellectual history of the university and of the country. Now it is time to recreate the promise of the future that the library represented.

Dr Bernadine Jones, lecturer in journalism at Stirling University in the UK

I did my masters and doctorate at UCT, and I used the Special Collections area for both. Much of my research looked at the colonial library of texts written about SA under apartheid, as well as government periodicals that can't be found anywhere else. My doctorate is now a book about SA elections from 1994 to 2019, so I used the government pamphlets and periodicals section quite a bit.

This isn’t just a mere collection of books and articles; it represents the history of a nation. Our written and preserved history, the early samples of African publishing, apartheid documents that were saved and cannot be found anywhere else in the world, the history of the UDF. This library is a collection of our culture and democracy.

For a young democracy like SA, this is extraordinarily damaging. We live through the experiences of our elders, and to lose these precious records of our struggle to freedom, and the long path to reconciliation is heartbreaking.

I used that space for many hundreds of hours over many, many years — it was a refuge, it was quiet, it was peace, it was focus. I would sit and study, I would read, I would sleep, I would daydream — surrounded by the manifestations of serious scholarly works, but also recorded voices of people who might never have imagined that their thoughts would be preserved in a space like that.

To me, more than anything else, it was the heart of the university, the soul … the very best of what we tried and try to do.”

Entering the reading room was always a beautiful, reflective and inspiring moment, and it was such a great pleasure to introduce students and visitors to the collections.

Over the years, the audiovisual librarian searched for films everywhere and the collection that was held in the library before the fire was formidable. I cannot imagine my teaching and supervision of South African and African film without being able to direct students across the avenue to the African Studies Library.

It's likely some of it has been saved, but the scale and variety of the collection is what made it so exceptional.

Even if you can resist the allure of a pile of wooden menus, I’m sure you’ll appreciate how items from places that symbolise happiness and good times ...
Opinion
4 weeks ago

You might think that a bump in traffic down our way could be a good thing for SA. Apparently, it isn’t
Opinion
1 month ago
Next Article