Confusion about regulations from the justice minister, directives from the chief justice and directions from the heads of SA’s various courts has slowed the wheels of justice during the national lockdown 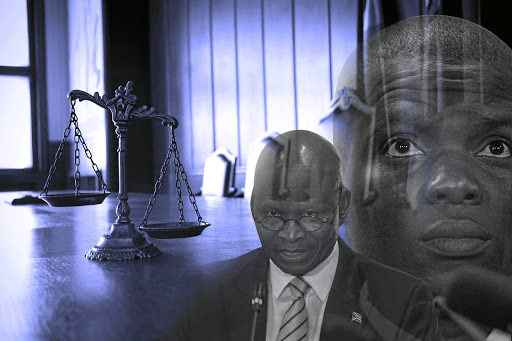 The national lockdown has had a number of unintended consequences, not least of which is a disruptive effect on the administration of justice in the country.

The courts, as guardians of the law, have to ensure that individual rights are protected and that all people have access to justice.

But as SA went into a hard lockdown at midnight on March 26, so did the courts.

Initially, they were set to hear urgent matters (related to the Covid-19 regulations) and virtual bail hearings were to continue. But all other civil and criminal matters were postponed, unless the judge concerned held it to be in the interest of justice to allow a hearing.

But there have been so many rules governing the courts in the past 2½ months, you couldn’t blame someone for being confused. In that time, justice minister Ronald Lamola has gazetted regulations for the legal profession while chief justice Mogoeng Mogoeng has issued his own directives for the running of the courts, delegating powers to the heads of SA’s various courts, who can also now issue directions, specific to their courts.

In April, the Mail & Guardian reported that the situation had created its own tension in the system.

In particular, Mogoeng reportedly wrote to Lamola, raising concerns over whether it was constitutional for the minister to issue regulations to close the courts before consulting the judiciary.

Neither Lamola nor Mogoeng has addressed this issue, opting not to comment or even confirm or deny the validity of the letter.

While this played out, the different regulations and directives were amended to allow for digital hearings and to broaden the scope of matters that could be heard. But this caused confusion among legal practitioners, as different courts applied the rules in different ways.

In a May 11 webinar with deputy justice minister John Jeffery, concerns were raised about discrepancies in the regulations and directives issued by Lamola and Mogoeng.

Jeffery said: "There’s possibly not agreement between the executive and the judiciary relating to who is responsible for what."

Less than two weeks ago, the general council of the bar (GCB) raised similar issues in a letter sent to Mogoeng, Lamola, Jeffery and the heads of the different courts.

In the six-page letter, GCB chair Craig Watt-Pringle says the council had compared the practice directives issued by the various court divisions (except for one, which at the time seemed to have issued no practical directives at all).

"Some directives give the appearance of facilitating access to the courts, but in our members’ experience, fail to do so in practice," Watt-Pringle writes.

"Some divisions leave matters to the discretion of individual judges, which makes it impossible to advise clients whether their matters qualify to be dealt with under the current circumstances and, if so, when and how."

At the root of the problem for GCB members, their instructing attorneys and their clients is that it is not clear whether there is adequate co-ordination between the different directives and regulations, which means there’s been little consistency in the way the various divisions of the high court are functioning.

"There is no obvious reason why some divisions have adopted a pragmatic and facilitative approach to the functioning of the high court, while others have adopted what can best be described, with respect, as a supine, if not obstructive approach," Watt-Pringle writes.

However, Mogoeng’s office tells the FM that the issuing of multiple directions based on a uniform directive is not new, nor is it employed only in extraordinary times.

Judiciary spokesperson Nathi Mncube says judicial case flow management is regulated by the Uniform Rules of Court, but the individual heads of court are empowered to issue directives on the management of civil cases. These directives will differ, he says, given the particular operations of each court.

But in a recent webinar hosted by Nelson Mandela University’s law faculty, Eastern Cape judge Glenn Goosen suggested the decision to delegate responsibility to the different heads of court has created discrepancies.

He provided examples of how certain courts have responded.

At the Supreme Court of Appeal in Bloemfontein, court president Mandisa Maya issued directives at the end of April stipulating that certain matters would be held without oral arguments, and court hearings would be conducted remotely.

This, said Goosen, marked a significant change in the judiciary’s response: it’s the first time the appeal court has conducted hearings by video conference with "judges scattered across the country".

As a result, it has dealt successfully with its court roll.

In Gauteng, remote hearings went ahead too. And courts in the Eastern Cape took a hybrid approach, using video conferencing for some matters, and conducting physical proceedings for others.

Given that SA’s Covid-19 infections have not yet peaked, Goosen warned that the courts should not return to normal operations now that level 3 of the lockdown has been implemented.

"As the judiciary, I believe we have a constitutional and institutional obligation to take measures which will achieve two critical things in this crisis," he said.

The first, he said, is combating the unmitigated spread of Covid-19, and the second is putting in place measures that will ensure the courts remain accessible and effective.

Goosen said efforts to deliver open and accessible justice should be intensified, and that the opportunity should be embraced to create a judicial system that will be dramatically transformed.

But he was emphatic in his view that not enough has been done by the courts during the lockdown so far.

According to regulations gazetted on Tuesday, court operations will significantly step up under level 3 — though they will still have to rely heavily on the use of technology in certain matters.

But restoring functionality will be crucial, given the impact the lockdown had on the backlog of cases.

In the letter, Watt-Pringle writes: "[Mogoeng], upon his appointment, set about reducing the backlog in the civil and criminal rolls.

"The considerable progress achieved in that regard, in some if not all jurisdictions, is being eroded at an exponential rate and will create backlogs which make the previous unacceptable situation pale by comparison."

It’s a concern echoed by National Prosecuting Authority (NPA) spokesperson Sipho Ngwema. He says the NPA needs to adjust to the changed conditions brought on by Covid-19.

"Productivity with regard to cases was definitely slowed down significantly," he says. "The directives that came with the national state of disaster meant that it became impractical to have many of the hearings."

Justice department spokesperson Chrispin Phiri says the regulations gazetted on Tuesday attempt to address backlogs. They stipulate that a priority roll must be compiled for each court under the direction of the judicial head of the court concerned and the NPA, in consultation with Legal Aid SA.

Similarly, the office of the chief justice says the directions given by the heads of courts also provide measures to address both the backlogs arising from the lockdown and issues arising from the national state of disaster.

Heads of courts are also mandated to address any backlogs by using the court recess to finalise matters.

But the reason the GCB wrote the letter is crucial: "The primary concern of the GCB is the impact that the current restrictions have on access to justice and, consequently, on the rule of law. At a time when civil liberties have been significantly curtailed, and enterprises in all sectors of the economy are facing ruin, a functioning judicial system is essential in order to mitigate the impact of these restrictions," Watt-Pringle writes.

"This mitigation is necessary so that the restrictions, not merely in their formulation, but also in their execution, are consistent with our freedoms protected in the bill of rights."

While access to justice is crucial, Goosen also raises concerns about the devastating financial impact the lockdown has had on legal practitioners.

He says any shrinking of the legal profession will have a profound impact, including for candidate attorneys.

"Courts need lawyers. Not just to prosecute cases before them, but as the future of the bench."

Acting judge to step down after lashing government over lockdown rules

CHARMAIN NAIDOO: Prayer helps the faithful, but so does sanitiser

Acting judge to step down after lashing government over lockdown rules

CHARMAIN NAIDOO: Prayer helps the faithful, but so does sanitiser