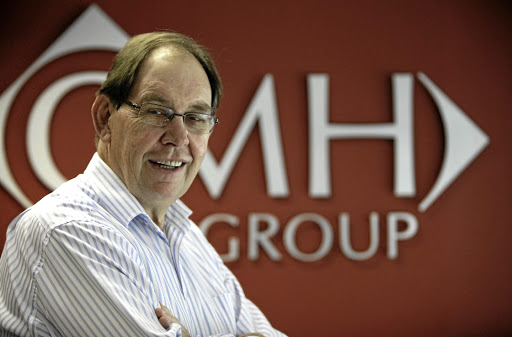 Motor dealership and car hire group Combined Motor Holdings has bounded out of the pandemic, with a marked increase in cash on its books — R754.8m for the year ended February — and a share price that is 55% up year on year. The FM spoke to longtime CEO Jebb McIntosh about the company’s results.

Clearly, you couldn’t sell the number of vehicles last year that you did before, but given the cash in your business, was 2020 actually a pretty good year?

JM: Well, it was probably the best second half that we’ve had in a very long time. During the first half we had 77 days where the licensing department and testing stations were closed, so we couldn’t get cars out until after that period. In the second half, all the stars seemed to be aligned. We didn’t have enough volume of new cars but we did manage to pick up our margins.

What’s the situation regarding shortages of cars?

JM: Almost across the board, we’re short of stock. And it’s not clear how long that’s going to last because it’s not just an SA situation, it’s worldwide. Chip shortages, for example, could go on for longer — as much as 12 months.

Why was it so good in the second half? Low interest rates, the fact that people can’t splurge on overseas holidays? PPE tender cash?

JM: It wasn’t really a boom when you look at volumes — I just think we managed to run our business a lot better. There certainly was a bit of pent-up demand; I don’t think it was tender money. And the approval rate was down on what it had been in previous years, but that’s now been rectified in the last month or two — the banks seem to have pushed up their approval rates. I think [it was] our process changes and cost cuts.

It sounds like you were pretty brutal. Did you have to be so tough?

JM: We reduced staff by about 25%, we’re running at about 22% [less staff] now. It was a complete shake-up in the way we think and how we can do things, including our use of digital.

Isn’t it an agonising decision, given SA’s unemployment rate?

JM: None of us initially knew what was going to happen. I remember leaving our dealerships: we put all the cars in the basements, put double locks on the doors and moved away, not knowing what we’d come back to. So you had your whole cost base with absolutely no income coming in and during those times, without knowing what the future held, we had to take decisions to ensure that the business would survive. If we had known what the end result would be, we probably wouldn’t have been as tough, but at that time you had to look after your cash flow — your expenses are running at R100m and there’s not one cent of revenue that comes in.

You’ve got a lot of cash now. What are you planning to do with it?

JM: We just bought another business and have taken on five extra franchises, so we are looking for opportunity. If we don’t find it, we’ll increase our dividend.

The market is clearly banking on a payout.

JM: If you do a comparison with our peers out there, our results for this period are so much superior to everybody [else’s]. We’ve never had such a big difference between our results and theirs.

Why do you think that is?

JM: I think they procrastinated a lot. From our viewpoint, they didn’t get on with the job. We took our medicine and put incentive schemes in and got on with our lives. We communicated with our staff every step of the way so everybody was in the picture; there was no hiding from it. And we’ve got a very motivated staff out there.

Have you been tempted at all to delist? Until now it’s been a horrific time for small-and mid-cap shares.

JM: We’ve got nothing in our sights at the moment, but it could be an option at some stage. They seem to make the rules more and more onerous, but that’s just my personal view. [Being listed] has motivated us, it’s put us in the public eye, but there are as many reasons to not be on the stock exchange today.

Would it be unrealistic to expect that this year will continue in the same vein as the second half of last year?

JM: Whether it can mirror the second half on the motor side is unlikely. But I think we can expect better than 2019. We’ve got our businesses lined up and we’ve got a few extra businesses that are contributing nicely, like our independent parts supplier. And car hire will be substantially better. That’s a big positive in our lives: we didn’t panic, we didn’t distress-sell all our cars and we’re at about 70% of what we did before the pandemic, where the rest of the market has dropped to 50%, so we’ve definitely picked up market share.