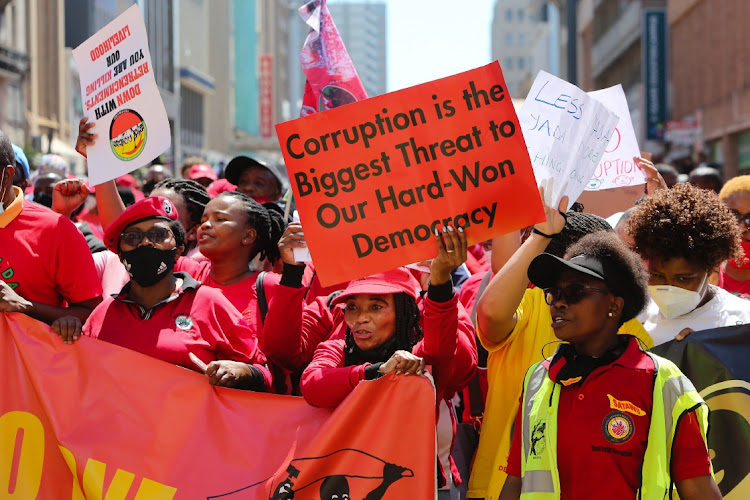 A once-off cash payment or bonus and a year-long pension holiday are part of a new settlement the government put forward to public servants this week as it moved to resolve the impasse with labour over the contentious third leg of the 2018 wage deal.

The FM understands that the new proposal, put to public sector unions on Monday by the department of public service & administration (DPSA), will reduce the cost of the initial 2018 package from R37.5bn to about R27bn – however, the government has asked for more time to work out the finer details of the proposed settlement, including the costing.

The public service wage bill is the single most expensive item in the national budget and the widening deficit means the state has to urgently curb spending. It is among the main reasons cited by ratings agencies for the further downgrading of SA’s investment ratings two weeks ago.

In court papers, finance minister Tito Mboweni describes the 2018 agreement as the “largest claim against [the] government ever to be raised in any labour forum”.

Earlier this year he government unilaterally decided not to implement the third leg of a three-year deal signed with unions in 2018, arguing that it is unaffordable. The matter is now before the Labour Court, but on Tuesday the government asked unions to postpone the case in order to pursue further settlement talks.

This comes after months of silence by the government and a legal tug-of-war involving unions, the National Treasury and the DPSA.

The government has argued that the increase agreed to is now unaffordable and therefore unimplementable – it was signed off by then public service & administration minister Faith Muthambi, who, the government argues, did not have a mandate.

Cosatu-aligned and independent unions this week rejected the government’s bid to have the matter before the Labour Court postponed.

The FM understands that labour is open to further talks but will not abandon its court bid to compel the government to implement the deal.

Sources close to the process say unions were asked whether a once-off cash payment and a one-year “payment holiday” on their pensions might be palatable to their members, instead of the CPI-plus-2% increase agreed to in 2018.

However, the state has not yet costed the offer or provided adequate information on the details of the proposed package.

“The government is making it very difficult for us,” says a labour representative who asked not to be named. “The people they have sent to present these things appear incompetent … there are no real details, it’s almost a political discussion instead of a negotiation. How can we take that back to members?”

Another says the Labour Court case has to continue and some unions are willing to continue talking to keep communication channels open, but others, such as the National Education, Health and Allied Workers’ Union, are unmoved by government’s latest overtures.

The matter continued in the Labour Court on Wednesday.

The DPSA could not immediately be reached for comment.

Tito Mboweni’s taking to social media to vent must be an irritation to some in the Union Buildings, as it exposes the shortcomings in Ramaphosa’s ...
Opinion
4 months ago
Next Article