Restoring hope and the SA economy through challenging times

During the Sunday Times Directors Event, industry experts discussed how a co-ordinated approach between business and government is needed to create jobs and food security 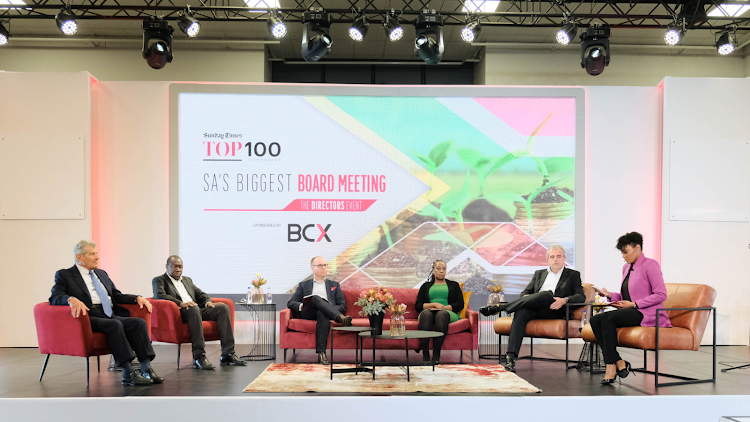 This year, the annual Sunday Times Directors Event, in partnership with BCX, discussed this important issue and  focused on reigniting the spirit of Ubuntu. Now in its eighth year, The Directors Event, dubbed SA’s largest board meeting, has become an important platform for dialogue and debate between the public and private sectors. It shines the spotlight on major issues of the day, said Sunday Times editor, S’thembiso Msomi.

Jonas Bogoshi, CEO of BCX, said the event was an important platform for leaders to listen and reflect. “Critically, it’s also an opportunity to ask a fundamental question: What can we do to make things better?,” he said.

Imtiaz Sooliman, founder and chair of Gift of the Givers, delivered this year’s keynote address.

Established 30 years ago, Gift of the Givers is the largest and most comprehensive disaster response organisation in the world. It provides unconditional assistance to the needy, irrespective of race, religion, colour, class, political affiliation or geographic location.

Since its establishment it has delivered life-saving goods and on-the-ground support in more than 43 countries around the world, including in SA. Most corporate social responsibility initiatives “don’t have a clue” and “don’t address the real issues”, said Sooliman.

Food insecurity has become a real problem. In provinces such as the Eastern Cape, children are dying of hunger. When people have no dignity and are hungry, they lose hope. If leaders want to make a real difference, then they need to give people hope. This requires that we grow the economy and create more jobs, he said.

Sooliman reminded the audience that SA doesn’t belong to the government but rather to its citizens. “It's our responsibility to fix SA,” he said.

While SA is likely to fare better than many economically, given the commodities it exports, the country’s ruling party is caught between its economic ties to the West and an emotional and ideological connection to Russia.

As the commodity boom tapers, it will need to bear in mind that it still requires foreign direct investment. SA only just made it to the top 10 of Deloitte’s 2022 Africa Investment Attractiveness Index, released this month. This indicates that more work needs to be done before the country successfully attracts investment.

The first panel discussion, moderated by Gugulethu Mfuphi, focused on fixing the economy to improve livelihoods.

The global environment has an impact on SA, resulting in higher food prices, and inflation and interest rates on an upward trajectory. Unemployment is at an all-time high, educational outcomes are poor, and the small business sector is struggling to survive.

The panel agreed that we need to grow the entrepreneurial sector and capitalise on the agricultural opportunities realised by the war in Ukraine. At the same time we need to move away from a purely extractive economy and put more focus on beneficiating  commodities.

SA also needs to expand its technological skills base so that South Africans can take advantage of global opportunities. SA needs to ensure it remains competitive, despite a focus on localisation.

The second panel discussion, moderated by Uveka Rangappa, focused on feeding the nation.

More than 40% of South Africans are affected by hunger and suffer from nutrient deficiencies. Hunger has worsened since the onset of the pandemic, making it more urgent that SA doubles down on securing resilient food supply chains.

Climate change is likely to worsen this situation. Unpredictable and extreme weather patterns – floods, droughts and wildfires – are playing havoc with agricultural supply chains which are impacting food security.

The problem isn’t that SA doesn’t have enough food, the problem is that it's not being equitably distributed. As affordability and accessibility become growing issues, we need to transition away from an industrialised food system towards more ecologically friendly agricultural methods and a more sustainable system, the panellists discussed.

Civil society organisations have stepped up to address hunger but need regulation on donations of excess food.

The biggest risk to food security in sub-Saharan Africa is climate change, including the risk of longer lasting droughts. This makes it imperative for the continent to curb its carbon emissions as quickly as possible.

WATCH | The Directors Event 2022: reigniting the spirit of ubuntu

The third – and final – panel discussion, moderated by Nompumelelo Runji, put the spotlight on new ways of tackling inequality.

The World Bank ranks SA as the most unequal country in the world. High levels of inequality are underpinned by inherited lack of economic opportunity for a large proportion of the population. While the government does offer a safety net in the form of social security grants, they are not big enough for survival.

What is concerning is that a growing number of people – many of whom are of a productive age - are falling into this social security net. Restoring hope to this sector of the population will require a co-ordinated approach between government and business to create opportunities for employment.

One of the overarching take-aways from this year’s Sunday Times Directors Event is that while SA faces a number of significant challenges, its recovery will be dependent on leaders in the public and private sectors, charting a bold and brave new path for the country.