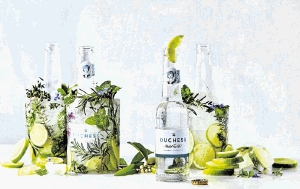 The ban on the sale of alcohol has catapulted SA’s non-alcoholic adult drinks industry to a strong growth trajectory, a trend that is expected to continue.

Johannes le Roux, founder and managing director of The Duchess Drinks Company, said the company’s non-alcoholic adult drinks brands revenue grew by 100% year on year in December 2020. He expects a similar performance in 2021.

The Duchess range has three alcohol-free gin and tonic brands — Botanical, Greenery and Floral — and two non-alcoholic wine spritzers — Elderflower and Berry Rose. The low or non-alcohol drinks company was created in 2016 for consumers who seek to reduce their intake of alcohol.

Le Roux said the lockdown “has fast-tracked the trends and movements of this market on a massive scale”, with the first lockdown a sampling phase that attracted new consumers.

Leanne Owens, adjacencies director at SAB, said sales of their non-alcoholic beer brands doubled or tripled during lockdowns, when the purchase of alcohol was banned.

AB InBev, which owns SAB, has a range of non-alcohol beers that include Castle Free, Becks Blue and Budweiser Zero.

“The demand for the range has outstripped supply,” said Le Roux. This was in line with global trends, he said.

The global non-alcoholic wine and beer market was valued at $20bn (about R300bn) in 2018 and is anticipated to reach $30bn in 2025, according to the “Non-Alcoholic Wine and Beer Market” report published by Global Market Insights. But this is still far smaller than sales of alcoholic drinks, which reached $1.47-trillion in 2018 and are expected to increase to $1.75-trillion in 2024, according to Statista.com.

AB InBev’s goal is to ensure that no- or lower-alcohol beer products represent at least 20% of the company’s global beer volume by the end of 2025.

The expected value of the global nonalcoholic wine and beer market in 2025.

But SA’s wine industry is not reaping the benefits.

Maryna Calow, communications manager at Wines of SA, said sales are nonexistent. There are only a handful of producers that sell de-alcoholised wine. Most wine drinkers would rather opt for a Grapetiser than go for de-alcoholised wine, “so it won’t really make a dent”, she said.

Tamra Veley, spokesperson for Pick n Pay, said many customers have turned to its growing non-alcoholic product range. The most popular are beers and ciders, followed by wines and gin pre-mixes.

Shoprite and Woolworths are in closed periods ahead of releasing results and were unable to comment. E-commerce sites have alsodriven demand.

Cayla Schwikkard, buyer at Yuppiechef, said sales have grown exponentially in the past 12 months. The best seller is non-alcoholic gin drinks from The Duchess.

Le Roux said targeted e-commerce platforms have provided direct access to The Duchess’s customer base. The brand is available at Yuppiechef and has recently listed on Amazon in Europe.

Rethink’s range includes oils, capsules and teas made from cannabidiol (CBD), a chemical compound found in the cannabis plant that is gaining popularity for uses ranging from relaxation to skincare.

Distell said the investment would help it to benefit from rising demand for cannabis products like CBD.

Invenfin, the venture capital arm of Distell's largest shareholder, Remgro, also took a 20% share in Rethink. Distell and Invenfin said their partnership with Releaf Pharmaceuticals could produce a range of CBD brands and market leadership in SA and other major markets.

Distell said this included but was not limited to CBD-infused drinks. It has been legal to sell CBD products in SA since 2019.

Unions slam the government for failing to consult, or consider alternatives, to sweeping booze ban
News & Fox
8 months ago

Distell and Invenfin move into cannabis

Capitec the latest bank to flip its card

Capitec the latest bank to flip its card