Best-liked ads of the Covid era

People prefer advertising based on stories about everyday relatable moments, the latest Covid-era survey of favourite ads finds. Those that deliver an explicit message are less effective than ones that focus on building impressions, heritage, humour and good causes

Reduced marketing budgets over the past year have led to brands developing shorter and less expensive television ads — and industry insiders say the trend is here to stay.

This is reflected in the latest Kantar Best Liked Ads survey that tracks and gauges public sentiment. It looks at TV ads from the past two quarters of 2020. Covid, it seems, has changed the entire approach to television advertising as marketers look for more "call to action" work and where the default platform is increasingly digital. A retail brand manager tells the FM: "Television is always my first consideration given its reach and dominance, but I’m now looking for digital synergy or at least advertising that can be repurposed and used across a variety of channels and at a lesser cost than in previous years."

Kantar says: "As lockdown dragged on last year and the economy suffered, marketing budgets were scrutinised and, in some instances, slashed to within an inch of their former glory." Quick-thinking marketers reacted by creating shorter ads, which were cheaper to produce. The 15-and 20-second formats still had an impact on audiences, making the case that short ads can work "as long as you get the story and branding right".

Kantar says the pandemic has also reinforced and accelerated the sustainability conversation. "There has been a concerted effort to reduce, reuse and recycle as well as support the economy and community by buying local. The SA story is therefore a good one to tell, as seen in the TasticXLaduma heritage [month] ad that tops the table for Q3 2020. Packed with the texture, colour, drama and expressions of how we celebrate our traditions, it’s the true essence of SA on screen." H&M’s "Let’s change. For tomorrow" ad also places the spotlight firmly on sustainability, which has been the golden thread running through the fashion industry.

Surprisingly, notes Kantar, areas of grudge purchasing also shone in Q4, with 1st for Women’s My body (stand up) song shaking up the undifferentiated finance and insurance categories by putting not just women, but purpose first. "Tapping into the gender-based violence debate declared as SA’s second pandemic of 2020, it encouraged the nation to stand together against women abuse." The ad marked 2020’s 16 Days of Activism social awareness campaign.

Savanna and Wimpy shared stories about everyday relatable moments, and similarly, Chicken Licken poked fun at home hairstyling fails. Kantar says its research also found ads that deliver an explicit message will not benefit brands to the same degree as an ad focused on building impressions. "Proving you can be functional without being boring, Standard Bank’s ad breaks the so-called fourth wall in pressing a pause on the action to explain new account benefits." And an ad from Outsurance, in which a call centre agent magically joins a showhouse tour, touts the "need for life insurance when you are buying a home to cleverly frame the functional need".

But it is advertising from Coca-Cola, with an ad taking top spot in Q4, that best tapped into the collective mindset of the festive season by summing up the prevailing sentiment: "When the world changed, it made us go back to the simple joys. We’ll take nothing for granted and always remember to taste the simple joys." 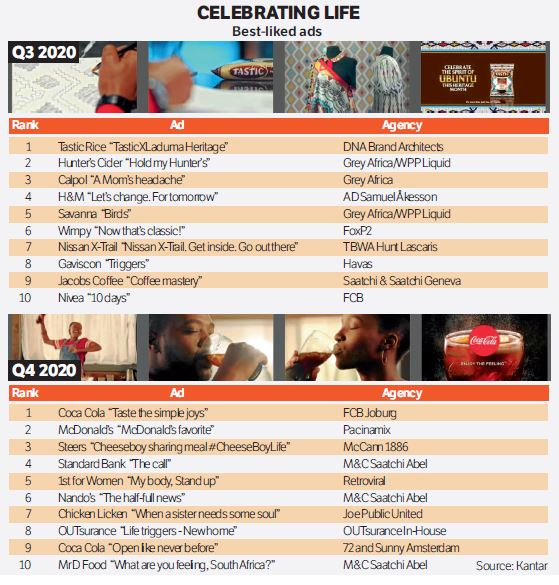 The best television ads flighted during the lockdown were those that encouraged a sense of collaboration and patriotism, looking towards recovery and ...
News & Insights
10 months ago
Next Article