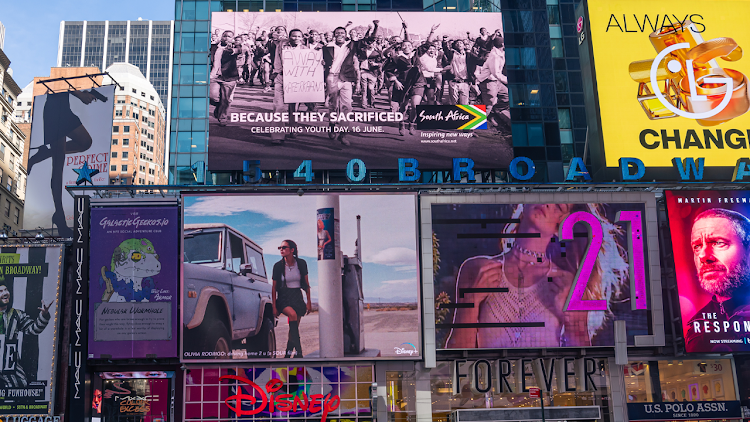 SA Tourism, the SA consulate-general in New York and brand and communications group Joe Public United have brought a unique digital campaign to life in New York City — in honour of the SA youth of 1976.

The campaign was displayed on a multistorey billboard known as the Digital Crown, located in Times Square’s pedestrian plaza between 44th and 45th streets.

It featured three of SA’s most recognised influencers who embody the revolutionary spirit, creativity, and courage of the youth: comedian Trevor Noah, visual activist Zanele Muholi and innovator Siyabulela Xuza.

Youth Day in SA honours a defining moment in history when 20,000 students in Soweto staged a peaceful protest on June 16 1976, in defiance of the apartheid government’s compulsory introduction of Afrikaans as the medium of instruction in schools. A brutal police crackdown resulted in the deaths of many students on that day.

“We will never forget the sacrifice made by our young people on June 16 1976, and we proudly honour their courage at one of the busiest intersections of the world for that reason,” said Motumisi Tawana, consul-general of SA in New York.

“Their bravery set off a chain of events that would bring about the demise of apartheid. Their unwavering courage lives on in the spirit of today’s youth, and SA is better for it.”

Jerry Mpufane, president of SA Tourism North America, said: “Whether it is through science, the arts or activism, SA is a beacon of creativity and continues to make a name for itself on the global stage.

“With this campaign, SA Tourism celebrates the vibrant energy of our young innovators who stand on the shoulders of those who dared to challenge the status quo in 1976 as they continue to create today. Never settling and always pushing forward, SA’s youth are adding to the rich culture that awaits visitors to our beloved destination.”

The campaign was meaningful to Joe Public “because it was not only celebrating SA and some of its iconic influencers to the world, but the agency was also able to share a story and pay tribute to the heroic lives lost on a day that will never be forgotten”, said Mpume Ngobese, co-MD at the agency.

“Joe Public wants to send a message to the youth to never stop being courageous and to always stand for what they believe in,” he said.

Xolisa Deyshana, chief creative officer at the agency, added: “Joe Public is honoured to have been part of conceptualising and producing this digital campaign. Through this campaign, the agency was able to put SA on the global tourism map and pay tribute to our youth by remembering one important day in our history — June 16 1976.”