All hands on deck in a pandemic 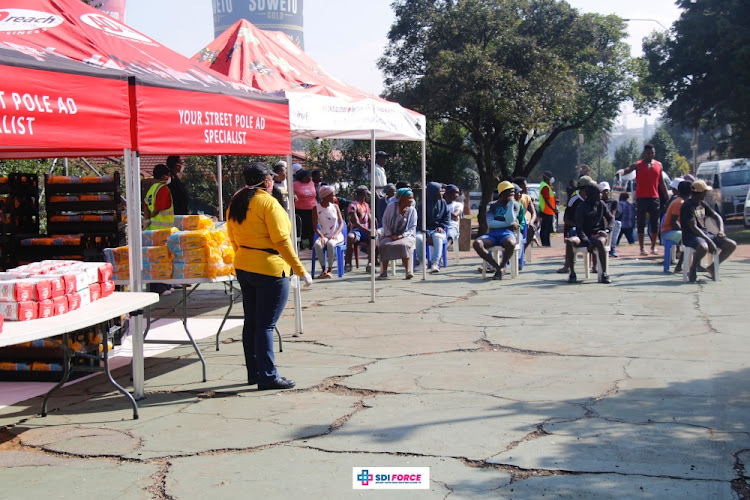 Nonfiction author Rebecca Solnit writes about hope, humanity and the human response, saying: “It’s a myth that our reactions to danger are fight or flight. There’s a third option often pursued: to gather for reassurance, protection, strength, and insight.”

Her book Paradise Built in Hell looks at this phenomenon, and when interviewed by Time magazine about the notion, she elaborated, saying, “In disasters, the great majority of people behave well. In some ways, they behave better than in ordinary life and in some disasters, people find [out about] the meaningful role of deep social connections and see their absence in everyday life.”

This sounds a lot like Ubuntu, which, for South Africans, is a collective feeling as much as it’s a philosophy.

The point is that while a crisis is a horrific thing, the way we respond to it often highlights how beautiful humankind can be.

Governments do their part, often sticking to a mandated disaster management plan, while humanitarian organisations are either facing the catastrophe head on or frantically filling in the gaps. So, what then remains for big (and small) businesses to do?

As it turns out, a lot. And most of the time it’s achieved with alacrity, innovation and an inspiring measure of humility.

In 2008, for example, a group of bloggers and website developers in Kenya quickly built and published the Ushahidi website to track incidences of post-election violence through eyewitness reports, submitted via text message and e-mail and collated on a Google Map. The software has since gone through many iterations. It has been used to keep tabs on similar crises internationally and to facilitate aid where possible.

In India, where women’s health has long been compromised by menstrual hygiene issues and conservative attitudes towards sanitary napkins, an unemployed entrepreneur decided to construct a machine to create cheap pads. His years of research, persistence and breaking taboos paid off – after winning awards and getting international funding, Arunachalam Muruganantham was able to set up his low-cost, female-run sanitary pad factories in over 1,300 villages.

More recently, when the Covid lockdown became a reality in the UK, with schools closed and exercising outside banned, fitness coach Joe Wicks broadcast workouts aimed at children on YouTube every morning, providing a physical distraction from pandemic fear and donating all profits to the National Health Service.

In SA, when everyone went into lockdown mode in 2020, out-of-home advertising and marketing solutions provider ADreach wanted to do its part to ease the suffering that came as a result of the pandemic. Realising that large numbers of people rely on handouts from passing motorists at intersections, the company saw a humanitarian crisis emerging on the doorsteps of SA suburbs. Hundreds, if not thousands of people could quietly starve as passers-by were locked in their homes during lockdown.

Making meaningful improvements in the communities in which ADreach operates has been integral to the business since inception in 1998. In line with this philosophy, ADreach founder Brad Fisher set up a WhatsApp group, connecting his friends, colleagues and just about everyone he knew, to raise funds to buy and deliver food parcels to homeless people in Joburg.

“It is all about being creative and thinking out of the box,” says Ryan Hancock, business development manager at ADreach. “By asking ourselves what could we, as a media company, do? we quickly set up shop as a temporary humanitarian organisation.”

Through this effort, ADreach raised just over R2m through the WhatsApp group and fed 10,000 families that usually rely on the “invisible economy” – people washing cars and selling goods at traffic lights, waste pickers and car guards – during the lockdown pockets. In addition the company sponsored a street pole ad campaign, valued at R2m, to spread the message on combating Covid and challenged other media companies to do the same.

This quick-thinking response may seem out of character for a media company, but when the lockdown struck, ADreach was already primed to help communities in need.

The ADreach Adopt-a-Project initiative has launched various grassroots development ventures that have grown into well-established projects such as WastePreneurs, a programme that uplifts informal waste collectors in Joburg, and the Soweto Canoe and Recreation Club (Scarc), which uses the power of sport to uplift young people by embracing their athletic potential while developing career and life skills. The award-winning movie Beyond the River was based on the Scarc story.

The company is closely involved with community organisation Adopt-a-River, which cleans thousands of kilograms of litter and plastics out of two rivers in KwaZulu-Natal and empowers and employs local workers.

In 2018, ADreach extended the successful Adopt-a-Project concept to empowering microbusinesses through Supplier Development Initiatives (SDI). The idea is for corporates to embrace the gig economy and give microbusinesses a chance to prosper.

Working with Solidarity, ADreach challenged other media houses to be part of Solidarity’s “Together We can Do Great Things” campaign, which achieved R8m of donated media space, including R1.25m donated by ADreach, to educate the public on measures they should take to stay safe from Covid.

This media alliance also helped raise funds to feed the neediest and to assist in getting small business back to work after lockdown.

SDI was integral to ADreach’s Covid response, which oversaw the company’s Covid feeding scheme, and worked with minibus taxi financier Bridge Taxi Finance to install ventilation spacers and hand sanitisers in 5,000 school buses to limit the spread of the virus.

Once more information about how Covid spread became available, ADreach was instrumental in bringing environmental health experts Apex Environmental and a group of multidisciplinary health and environmental scientists, business leaders and communications experts together to form the GreenFlag Association. Its mission is to reduce the transmission of airborne pathogens, including Covid, in closed-air public spaces through emphasising the use of proper ventilation.

To get the message that fresh air saves lives out to the broader public, ADreach sponsored R10m in street pole advertising to the GreenFlag Association, to help spread the word on the importance of ventilation in the fight against Covid.

“Doing good business and caring for our customers is one thing, but in SA we don’t live in a vacuum. There is a lot of need out there and, as a company, we see it as a responsibility to assist and uplift our fellow South Africans where we can,” says Hancock.

Making meaningful improvements in the communities in which ADreach operates has been integral to the business since inception in 1998.

Media organisations should pay attention to this pent-up desire for empathy, and new forms of self-expression that is often nonverbal
News & Insights
1 year ago

Empathy as a connector

Altruism – the holy grail for brands in 2020 and beyond