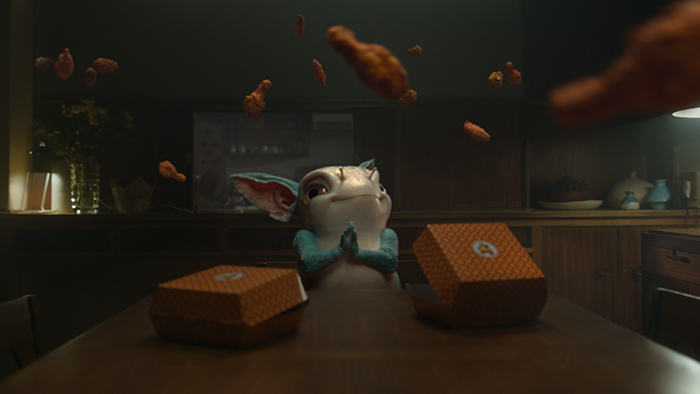 It’s not hard to imagine extraterrestrial creatures living among us mere mortals thanks to sci-fi being such a popular genre. It would seem anything is possible, especially in the world of television, which can bring the unimaginable to life.

In another SA first, the latest Chicken Licken Hotwings film, the theme of outer space brings intrigue to the audience as it reveals just how far even an alien will go to satisfy its craving. Because when the craving’s got you, it’s got you!

Integrated brand and communications group Joe Public United has once again succeeded in hitting the mark with a film that impresses with its off-the-wall narrative and world-class cinematography. Working with SA director Terence Neale, who is a master of his craft and has worked on global brands that range from Beats by Dre to Asos and Adidas, the team has pulled off a full-scale production using sci-fi, rarely seen in similar markets in this country. This is also Neale’s first SA production in four years.

Viewers are introduced to an adorable little alien ZeZorc, who arrives in the middle of the night. The family finds it raiding their kitchen, causing much chaos as it thrashes through the fridge looking for something to eat. Sharing a likeness with blockbuster movie E.T., the alien quickly integrates into the family and is much loved by all its members.

In every scene, the cuddly alien appears to ooze kindness using his superpowers for good, which makes the family love and trust it even more — they even allow it to sleep with them. The only thing they can’t seem to satisfy is ZeZorc’s hunger. That is until the Chicken Licken delivery guy appears at the front door and the father carries the takeaway of Hotwings inside. Immediately noticing the logo on the packets, we quickly discover the real reason that ZeZorc is here ...

Xolisa Dyeshana, Joe Public United Joburg’s chief creative officer, says: “As a brand, Chicken Licken is strategic in its campaign approach; as partners we know what works for its audience, which makes it a pleasure to work with. This sci-fi concept further highlights its reputation for being out-of-this-world good. So good that its products exceed even the constructs of life as we know it, and that it’s for everyone and everything, human or not.”

Watch the film below: