EXPOSED: How Ford was warned about burning Kugas but did nothing 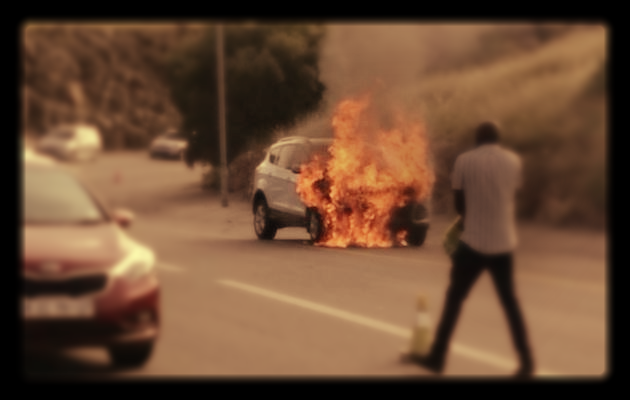 This Kuga was on its way back to a dealership in Alberton. Picture: WARREN KROG

FORD was warned for at least a year that its Kuga SUV had potentially deadly problems — but appears not to have acted on the alarm bells.

At least 47 Kugas have caught alight and one person has died after his car burst into flames.

An investigation by The Times has established that Ford SA was warned of the problems last January following an investigator’s probe into two Kuga fires.

Insurance companies also confirmed that they had alerted the company to issues relating to the Kuga going back as far as 2014.

Ford issued an alert to Kuga owners only in December after the National Consumer Commission summoned it following our reports about the burning vehicles and about the death of Reshall Jimmy.

Jimmy died when his Kuga caught fire in December 2015. Ford and the consumer commission are due to make a “major announcement” on Monday. Speculation is that it will involve a recall of the model‚ one of which caught fire as recently as Saturday.

Emails seen by The Times show that fire investigator Larry Jenkinson‚ hired by Discovery Insure‚ raised the alarm with the insurance company after he investigated two Kuga fires in January last year.

Jenkinson believed the fires were similar to fires in a similar model in the US and Europe‚ following which Ford ordered a mass recall of the vehicle.

But Ford’s news operations director‚ John Gardiner‚ said the recalled vehicles are not the same as the ones imported into South Africa. Ford did not respond to questions asking what it had done when alerted to the problems.

It was Jenkinson’s report into a fire which destroyed Pretoria mother Zané Verhoef’s Kuga that caught the attention of Discovery Insure’s claims specialist‚ Shawn Muller.

Verhoef was rescued from her burning car after her daughter‚ Tinique‚ 11‚ stopped another motorist. Verhoef had managed to get Tinique out of the car‚ but was trapped when her feet got stuck underneath the car’s pedals.

Jenkinson’s report concludes that the fire had been at the back and lower extremities of the engine compartment of Verhoef’s Kuga.

“The fire is considered to have occurred on the superheated surfaces of the exhaust manifold‚ the turbocharger and the catalytic converter. The combustible media that was ignited is engine oil and oil vapours that have leaked from the engine in or around the engine’’s turbocharger and-or the cylinder head‚” his report said.

What Judge Davis said about the Absa 'lifeboat' - Executive Summary

“The nature of the oil leakage condition is entirely consistent with other problems apparently caused through localised engine overheating conditions that have already been identified by Ford USA and Europe and recall campaigns have already been introduced to attend to the problem.”

Jenkinson said he could find no other reasons for the fire.

The Times has learnt that‚ after receiving Jenkinson’s report‚ Muller contacted Ford five times between January and February to alert them to the findings.

Verhoef’s husband‚ Bertie‚ who was given Jenkinson’s report‚ emailed it to Ford’s Phineas Papo‚ but no response was forthcoming.

“When Ford stopped communicating‚ Discovery told us they would handle the matter. They said the report was in our favour and they would take Ford on.”

The Times has seen several e-mails‚ in which Jenkinson’s report is attached‚ sent in August by Discovery to Ford‚ in which the insurer questions the lack of responses to its queries and the concerns of its clients.

Discovery confirmed that it had attempted to liaise with Ford SA on fire-related claims from 2016. Ford had acknowledged receipt of its e-mails. Discovery‚ which has dealt with three Kuga fire claims‚ declined to answer if Ford had provided it with a detailed response.

Robyn Farrell‚ CEO of Telesure’s short-term insurance division that includes Dial Direct — which had insured Jimmy’s Kuga — said it had rejected two Kuga fire claims‚ one of which was Jimmy’s.

“Those two claims were rejected as the fire was found to be caused by a mechanical fault; a standard exclusion on vehicle policies.”

Telesure said it had 775 of the 1.6-litre Kugas in question on its books.

Farrell said Telesure had contacted Ford SA after every one of the claims and advised its customers to do the same. The company didn’t say how or whether Ford had responded.

Between 2014 and 2016 insurer Santam processed five Kuga claims and settled all of them.

Santam spokesman Donald Kau said: “Ford SA was made aware of those claims.”

Hollard spokesman Warwick Bloom said the insurer had handled two such claims in the past year. Bloom said if a manufacturer’s defect is to blame‚ it could potentially institute recovery action against Ford. He said in one of the cases the client had opted to pursue “a recovery” directly against Ford.

The SA Insurance Association said it was concerned with the “phenomenon in which multiple Kugas were damaged by fire”.

“It’s come to our notice that a similar model has been recalled by the manufacturer in the US. We trust the manufacturer in South Africa will follow suit and a proper investigation will be done to confirm the cause of the fire damage to so many vehicles so the problem can be addressed appropriately.”

Ford’s Gardiner said it was in contact with insurance companies‚ “but it would be inappropriate for us to discuss the dialogue with them at this time”. He said recalls in the US related to 2013- model 1.6-litre Escapes built in Louisville‚ Kentucky. [Kugas are known as Escapes in the US.]

“It did not relate to Escape vehicles built elsewhere in the world‚ or to the Ford Kuga models built in Europe‚ including those exported to South Africa. Our decisions [on recalls] are driven by the data available. When the data indicates a safety recall is needed‚ we move quickly on behalf of our customers.

“Our investigation in South Africa is not complete‚ but we have agreed with the National Consumer Commission that we will keep it and Kuga customers updated on our progress and will report back to it at the end of February.”

Gardiner said investigations into the Kuga fires in South Africa have led Ford to discover that the fires may be a result of engine overheating. He said customers with these vehicles should take their cars to a Ford dealer where the coolant systems can be checked. - The Times

Another Ford Kuga goes up in flames, and Ford can only help next week

A businessman, who is ‘furious’ with Ford SA is grateful he broke with routine and didn’t have his daughter with him — ‘My guardian angels worked ...
Companies
4 years ago

Ford at odds with investigators over Kugas

Ford accused of ‘worthless’ forensic analysis, while the car maker insists key documents are being withheld as at least 40 more Kugas reportedly ...
Companies
4 years ago

1.
The real weakness in the SANDF, and it's not a ...
News
2.
Gospel singer Lundi Tyamara has died
News
3.
The life and times of the sons of Mugabe
News
4.
EXPOSED: How Ford was warned about burning Kugas ...
News
5.
The shocking inside story of the R200m OR Tambo ...
News

1.
The real weakness in the SANDF, and it's not a ...
News
2.
Gospel singer Lundi Tyamara has died
News
3.
The life and times of the sons of Mugabe
News
4.
EXPOSED: How Ford was warned about burning Kugas ...
News
5.
The shocking inside story of the R200m OR Tambo ...
News