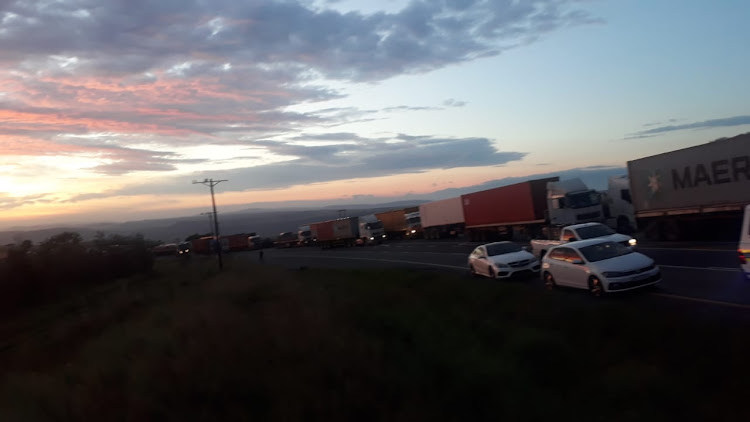 Business in KwaZulu-Natal is worried about the impact of recurring road blockades on the N3 trade corridor.

In the latest incident on Friday, truck drivers blockaded the freeway route into the province, citing government failure to provide feedback about their concerns. The operators had wanted a response to their demands by November 3, which include that government removes the operating licences of trucking companies hiring foreign drivers.

By 9am on Friday there was a backlog of traffic on the N3 Toll and lanes were closed resulting in a complete standstill northbound from Tugela toll plaza and southbound from Van Reenen. Police were attending to reports that truck drivers parked their vehicles on the N3 and removed the keys.

The trade route is crucial to the region’s economy and joins trading partners in the Southern African Development Community (Sadc), Durban Chamber of Commerce and Industry CEO Palesa Phili said.

“The KZN economy is extremely reliant on the N3 Corridor, as it serves as a critical trade route, connecting our two harbours to the Sadc region,” she said.

“If these protest actions persist it will impact the entire value chain from trucking companies to the receiving businesses,” Phili said.
“Continuous congestion, road closures and concerns of safety along the N3 are factors that create uncertainty and delays in freight turnarounds times and thus creating additional costs for businesses.”

“While we still do not have the full details of the reasons for the blockage , the Durban Chamber of Commerce and Industry NPC condemns this disruptive behaviour and calls for urgent intervention.”

“We encourage law enforcement to take the necessary steps to arrest the situation immediately, increase visibility and full coverage of the affected areas. As organised business, we call for stability and order. We remain committed to working with the public sector on finding workable solutions,” she said.

Several sources within the trucking industry told Business Day Friday’s protest followed a memorandum of demands handed to transport and labour ministers Fikile Mbalula and Thulas Nxesi on October 25 during a protest on the N9 and N10 highways outside Middelburg in the Eastern Cape.

The ministers accepted the memorandum, calling for intervention into the four-year long debate about the employment of foreign nationals in the logistics industry and the effect on job opportunities for South Africans.

Government said a technical team would report back to the drivers and small truck operators, which sources claimed did not happen.

National Truck Drivers Association secretary-general Siphosihle Muthwa alleged the government had failed to respond to the drivers within seven days, as initially agreed.

“Government promised the drivers that within seven days they would provide them with feedback into the process of addressing concerns around the employment of foreign nationals, among other issues. Government never came back to them. That is why we are seeing what is happening on the N3.”

Muthwa said one of the demands in the memorandum was for the government to remove the operating licences of employers hiring foreign nationals.

“That will stop all the things that are happening, but government do not want to give the memorandum to employers. That is why drivers are angry.”

“These are South African drivers who are blocking the road because they are tired of the unemployment rate and the hiring of foreign nationals while South Africans have the skills to drive trucks.”

Mbalula and Nxesi are in West Africa with President Cyril Ramaphosa on a state visit.

This is a developing story