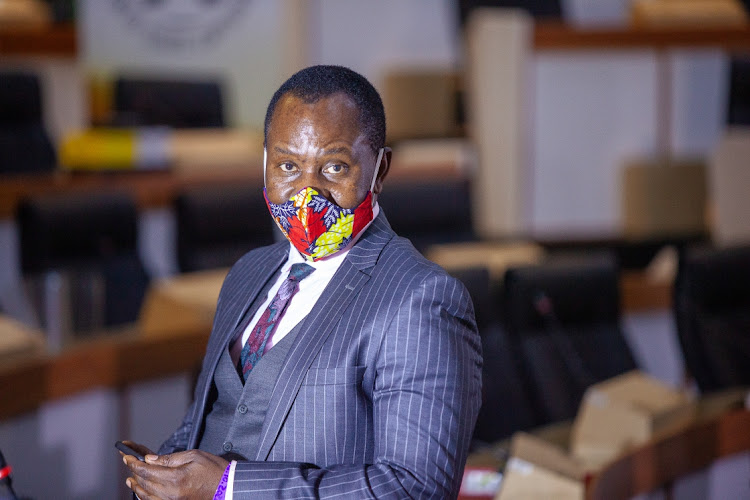 Mosebenzi Zwane prepares to testify at an early appearance at the Zondo commission in Johannesburg, October 12 2020. Picture: PAPI MORAKE/GALLO IMAGES

Deputy chief justice Raymond Zondo on Tuesday said he was struggling to understand why former mineral resources minister Mosebenzi Zwane got a lift from Switzerland to India and then to Dubai from the Guptas during an official trip.

Zwane, a minister during former president Jacob Zuma’s term, took the witness box again on Tuesday, and denied he put pressure on global mining company Glencore to sell its Optimum mine to the Gupta-owned Tegeta.

A close ally of the former president, Zwane was alleged to have done the  bidding for the Guptas, who were interested in the mine.

The Guptas were friends of the former president and were at the centre of state capture allegations, scoring lucrative tenders and influencing the appointment of cabinet ministers and heads of strategic state-owned enterprises.

On Tuesday, Zwane told the commission that he flew to Switzerland to meet Glencore CEO Ivan Glasenberg in 2015 in a bid to save jobs that were at stake when the mine was facing liquidation. He insisted he held no brief for the Guptas.

“I went to Switzerland to try to save jobs and the bloodbath that had become imminent in the department of mineral resources & energy when I joined,” he told the commission.

“I went there to try to rescue the 3,000 jobs at stake in any manner possible, including, but not limited to, a possible buyer of the mine. I was not married to any particular buyer as long as correct processes were followed,” said Zwane.

He said that after the meeting, he hitched a flight with the Gupta brothers to India as he was sick, struggling with a condition in his throat that was worsened by the cold weather in Switzerland.

Zwane said he received treatment at a public hospital in India and later again hitched a flight with the Guptas to Dubai, where he then took a commercial flight back to SA.

Zwane told the inquiry he was supposed to meet potential investors in India, but he struggled to explain to Zondo why he could not just fly back home given his condition, which he said sometimes caused him to completely lose his voice.

“Because you were so sick, why didn’t you just go home?” asked Zondo.

“How were you going to communicate with them [investors] if you couldn't talk? What was the point of proceeding with the trip which required you to talk with investors when your voice was giving you such a big problem that you thought you wouldn’t be able to talk to people at different airports if you used the commercial flights?”

“For me, if the purpose of your trip to India involved speaking to investors but you were so sick you couldn’t even talk to someone who is close to you ... I don’t see why you would still proceed as you would not  be able to do what you were supposed to do.”

“That’s why you should go back home. Why insist on going there? How was it going to help you travelling with Tony Gupta in terms of your voice, instead of taking the flight that had been booked for you and paid for by government?” asked Zondo.

Estranged wife of former minister testifies at the Zondo commission of inquiry into state capture, mainly about her family’s relationship with the ...
National
1 week ago

State capture commission did not lose any data in burglary as data was backed up, says secretary
National
2 weeks ago

Economic recovery: prepare for the upswing

Zondo denies Bain permission to publish affidavit setting out its version in ...

Economic recovery: prepare for the upswing

Zondo denies Bain permission to publish affidavit setting out its version in ...