With boosted power and a sporty body kit, hot hatch is the swansong of the seventh-generation model 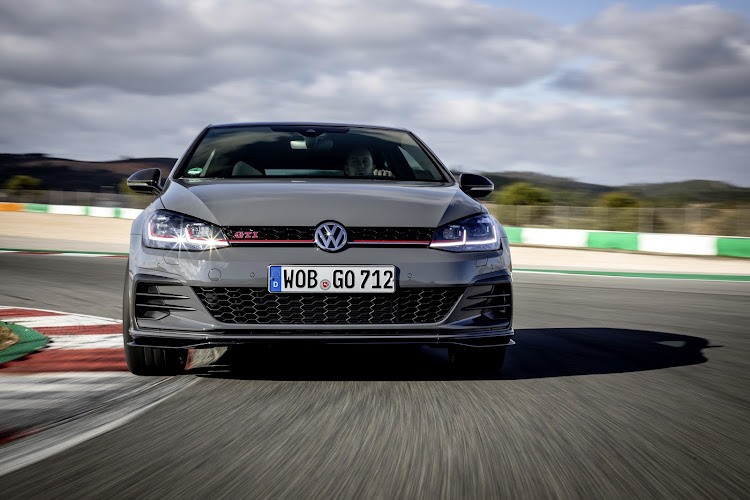 Aimed at Golf enthusiasts looking for a collector’s car, the GTI TCR will be made available in only 300 units locally. Picture: SUPPLIED

Volkswagen has announced a R669,000 price tag for the limited-edition Golf GTI TCR that will go on sale in SA in about July.

Available in just 300 units, the high-performance hatchback will be the final derivative of the VW Golf 7 before the eighth-generation range, including the new GTI, arrives here early next year.

Aimed at Golf enthusiasts looking for a collector’s car, the front-wheel-drive TCR gets a power boost, uprated brakes, and some sporty internal and external cosmetics to set it apart from the standard Golf GTI.

Under the hood is the familiar 2.0l petrol turbo four-cylinder engine, but with increased outputs of 213kW and 370Nm, outgunning the standard Golf GTI’s 169kW and 350Nm.

The TCR has a claimed 0-100km/h sprint of 5.6 seconds, with the electronic speed limiter removed to give the car a top end of 264km/h.

Power is sent to the front wheels via a six-speed DSG auto gearbox, and the car is equipped with a front-axle differential lock, perforated disc brakes, and dynamic chassis control that allows the suspension stiffness to be adjusted.

The TCR, which will only come in a five-door version in SA, is also distinguished by its matte black exterior mirror caps, sill extensions, front splitter, TCR roof spoiler and a diffuser at the rear. It also wears distinctive black 19-inch Reifnitz alloy wheels, named after the annual VW-GTI-Meet at Worthersee in Reifnitz, Austria, that attracts thousands of GTI fans.

“The Golf GTI is one of SA’s most iconic cars, a celebration of the open road and love of driving,” says Martina Biene, head of the Volkswagen brand in SA.

The first-generation Golf GTI was launched in SA in 1980 and has spawned a number of special-edition cars over the years, most recently the Edition 35 (2012), and the Clubsport and Clubsport S editions of 2016.

With a bolder design and more digitization, the premium compact car heads for SA in Sportback and sedan guises
Life
11 months ago

With fewer cars on the road, insurers with more flexible products will be best placed to thrive
Life
11 months ago

THE BIG READ: Closer to the edge: is the sixth mass extinction upon us?

Devlin Brown at the watercooler: Not all of us can have Cheslin Kolbe’s biceps

THE BIG READ: Closer to the edge: is the sixth mass extinction upon us?

Devlin Brown at the watercooler: Not all of us can have Cheslin Kolbe’s biceps