Some take a jaunt to space, others trudge to work in the rain. It’s clear our systems have failed the poor 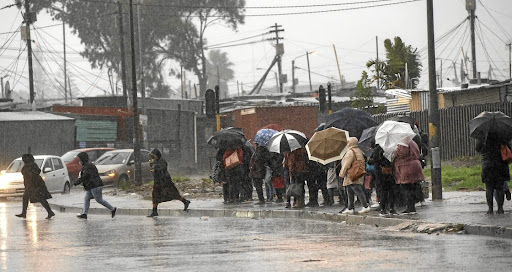 Stranded: Commuters queue for what little transport is available amid taxi violence in Cape Town. Picture:

Cape Town may have escaped the looting that devastated swathes of KwaZulu-Natal and Gauteng in the second week of July, but that week also marked the start of an escalation of taxi-related violence in the city that hugely disrupted the lives, livelihoods and education of tens of thousands of people.

In July alone, at least 24 people were murdered in the dispute between the Cape Amalgamated Taxi Association and the Congress for Democratic Taxi Associations, over a route between Paarl and Bellville. Many others were wounded in shooting incidents.

Taxi services were suspended for almost a month. With the train system in the city all but collapsed, bus and Uber drivers were targeted for trying to fill the gap. So for the tens of thousands of people who rely on taxis daily, it was nigh impossible to get to and from work, school, clinics and shops.

The duration of the service suspension was unprecedented, but the circumstances were hardly unusual. Cape Town taxi users are accustomed to bouts of violence that claim the lives of drivers, passengers and bystanders. It is commonplace for commuters to arrive at taxi ranks on their way home from work to discover that some new incident during the day has shut down services, leaving them stranded.

Media coverage of these "minor" disruptions is relatively scant. Mainstream radio stations’ traffic reports rarely include updates that are useful for those who rely on taxis. While coverage subsequently improved, for at least a week after the start of the July chaos there were no regular public updates on whether taxis had resumed services. Commuters had to actually go to the taxi ranks to see whether they might be able to get to work.

The public reactions of authorities were infuriatingly anodyne — more suited to breaking up a playground squabble than responding to havoc-wreaking and horrific violence.

Transport minister Fikile Mbalula said his department was "disappointed with the recent turn of events".

In his council speech on July 29, mayor Dan Plato said the Western Cape government had "done all it can to address this situation, including the closure of a major route". How the people who rely on that route would get to work went unmentioned.

After three weeks of "talks", there is little evidence that the underlying causes of the dispute have been addressed. On resumption of services, Mitchell thanked "commuters [who] have been inconvenienced by this time", as if a burst water pipe had closed a road for a few hours.

On July 20, Golden Arrow bus services were suspended following the shooting of one of the company’s bus drivers, in the mouth, the day before. The company said the suspension affected about 100,000 commuters.

On that same day, Amazon’s Jeff Bezos launched himself into space, in an 11-minute joyride that cost $5.5bn.

The news broadcast I was listening to that reported the Bezos story then moved straight to reports that people were spending hours walking to and from work in Cape Town to avoid losing their jobs. It was a ridiculous contrast — a fabulously wealthy man zooming around in orbit while thousands of people trudged for hours along the N2 in the rain. It was also a stunning illustration of how our economic and political system has failed to address problems that are eminently solvable, but ignored because they only affect poor people.

The saddest part of all is that those who are worst affected appear to have given up hope that political leaders will be able to solve the problem. They are resigned to this kind of disruption — which would bring down governments in many parts of the world — being a regular part of their lives.

Wouldn’t it be great if more of the wealth, power and technology deployed to send the Bezoses of the world into orbit were directed to resolving some of the pervasive problems that don’t bother the rich, but have such a critical impact on daily quality of life for those less fortunate? I can’t pretend to understand the mind of a spaceman billionaire, but it seems to me that would be a far more meaningful and personally satisfying contribution than an 11-minute round-trip to space.

The financial cost of the Cape taxi violence has yet to be quantified. But it’s taking a toll on businesses — and workers — across the board
Features
2 months ago

Climate deal could save Treasury billions and solve ...

JOHN DLUDLU: Black lives of those killed in unrest ...

Lamola eyes the purse but drops opposition to R1bn ...