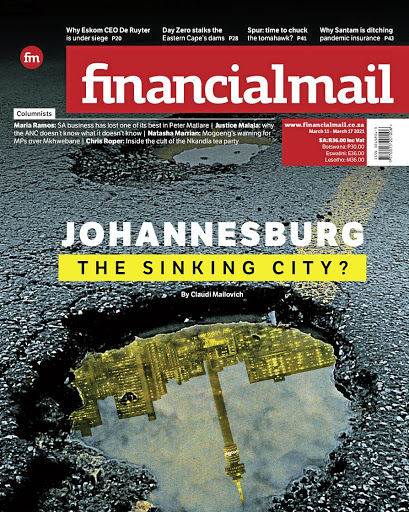 Claudi Mailovich ("A Sinking City", Cover Story, March 11-17) seems to have drunk deeply from the Michael Beaumont/Herman Mashaba Kool-Aid. Even her sign-off line — "If Joburg works, SA works" — comes from them (though it is a good line).

Her article is uncritical of Mashaba’s term of office. Even the DA has admitted he gave the keys of the city to the EFF and damn the consequences — power at any cost. And she states that Mashaba resigned "due to internal party politics". Really? How about being too afraid to face the humiliation of defeat in a no-confidence vote?

But back to her article. Yes, the Joburg Roads Agency does seem to have serious challenges, but these would have been considerably less daunting had Mashaba backed former MD Sean Phillips in 2017, when he raised those red flags. He did not, and Phillips had no option but to resign.

The article then raises two matters highlighted by Beaumont: the nonprogression of the institutional review, and the "hundreds of billions in infrastructure backlogs". Both are red herrings.

First, the institutional review died in Beaumont and Mashaba’s hands. After a "botched" initial procurement, they iced it. And their recipe for success in the proposed institutional restructuring — the abandonment and reabsorption of entities such as City Power, Joburg Water and so on — is no panacea for improved service delivery.

I was responsible for the creation of Joburg Water under Ketso Gordhan back in the day, and became its initial MD. There were compelling reasons to go this way at the time: operational and decision flexibility, focus, speed of procurement, engineering and network integration, creating a winning culture and so on.

The truth is that both models can work — it all depends on good management. Even if Joburg Water were to become a city department again, all the interfaces would remain — be these between roads, planning, billing, IT and many more. It is a case of how these interfaces are managed. The risks of undertaking a huge reorganisation are easily underestimated.

The second matter — the "billions in infrastructure backlog" — is all too frequently used as a scapegoat for nondelivery (Mashaba was particularly adroit at this). It is a measure that is both alarmist and inappropriate.

One should (and Joburg does) do condition assessments of infrastructure and then calculate what the annual capex spend should be to rehabilitate and replace the worst of it over time.

By this measure, annual capex spend is too low at present, probably by about a third, or a few billion a year. Ironically, capex spend dropped significantly under Mashaba’s mayorship.

The most compelling task Joburg faces is improving revenue and controlling costs so there is free cash flow to finance capex. Covid hasn’t helped, but this too will pass.

If Joburg succeeds, then SA succeeds. But the city is facing huge problems — from needless bureaucratic tangles to an IT nightmare. But amid this ...
Features
1 month ago
Next Article