In Ramaphosa’s ANC, a violent incursion into a sovereign state is just an excuse for another talk shop, another commission, another belated mortician’s report 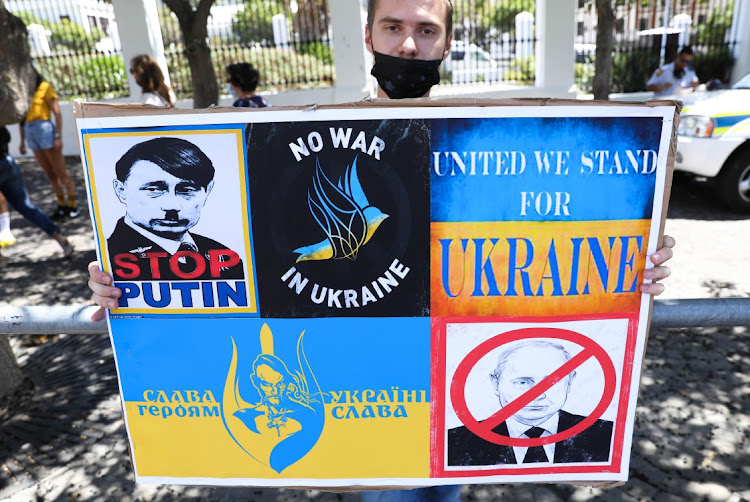 If you’re wondering why President Cyril Ramaphosa’s noble promises have failed to translate into action, look no further than the breathtakingly mealy-mouthed statement by the ANC’s international relations chair, Lindiwe Zulu.

On Sunday, as Vladimir Putin’s Russia was on day three of a “special military operation” that involved shelling residential areas in cities including Kyiv and Kharkiv, Zulu issued a statement expressing her “deep concern about the rapid escalation of conflict”. Studiously avoiding using the word “invasion”, she said the ANC was “appalled but not surprised by those beating the drum of war when instead they should have been pre-empting confrontation by being insistent on dialogue”. Presumably, Zulu means those who called for intervention to stop Russia shelling another sovereign state. Had there been any working televisions, radio, newspapers or the internet in Luthuli House, Zulu — who also doubles as SA’s intellectually towering minister of social development — might have noticed that Putin had pretty much ruled out “dialogue” when he spoke of the “band of drug addicts and neo-Nazis that sits in Kyiv”, arguing that Russia’s interests were “non-negotiable”.

It’s predictable, if depressing: in Ramaphosa’s ANC, a violent incursion into a sovereign state is just an excuse for another talk shop, another commission, another belated mortician’s report.

Now, it’s clear that the picture is more nuanced than a blunt good vs evil binary. Putin is seething that Western countries have ignored his claim that Ukraine broke the Minsk agreement, which would give the two provinces of Donetsk and Luhansk relative autonomy. And he’s paranoid about Nato-aligned countries inching east, and incorporating Ukraine — this is a “red line”, he says.

Yet Putin’s remedy for his embellished grievance is disproportionate and a breach of international law. His ruse for remaking Imperial Russia by sending in 150,000 troops relies on dopes like Zulu swallowing his line that it’s a “peacekeeping mission”.

In the ANC statement, Zulu warns that people must apply their minds “in the face of brazen propaganda” and “unprecedented disinformation” — even as she falls hook, line and sinker for a whopper herself. There must be a throng of slick salesmen outside her door, trying to flog her an emerging cryptocurrency, or the next big thing in 4IR.

But then, when you’ve made a career of putting ideology ahead of truth, comforted by the cotton-wool swaddling of phrases like “imperial manipulation”, maybe it’s what you’re intellectually obliged to do. Hers is a mission statement for a la-la land of dopey diplomats and unctuous officials, inevitably surprised when the inevitable happens.

Not everyone in the ANC is able to spout vacuous revolutionary slogans on command. Naledi Pandor, for one, must be overdue for a stint in a re-education gulag after forgetting that values are subservient to ideology. Last week, Pandor’s department of international relations & co-operation called for Russia to respect Ukraine’s sovereignty.

Apparently, this didn’t please Ramaphosa, who, the Sunday newspapers reported, was irked at such a resolute take on an issue that could have been diluted into something far more wishy-washy.

Speaking to the media last Friday, Ramaphosa said that if US President Joe Biden had agreed to meet Putin to discuss the Ukraine situation without any conditions, “I’m sure we would have avoided the calamitous situation that is unfolding now”.

Which, of course, is an irrelevant argument.

And yet this is illuminating of Ramaphosa’s loyalties, driven in part by SA’s awkward alliance with the Brics countries — Brazil, Russia, India and China.

It underscores the extent to which the ANC has long had a misplaced romanticism of Russia. Maybe it’s because the ANC’s financial woes precluded it buying any textbooks dated after 1989, or maybe it’s because leaders like David Mabuza are always dashing off to Moscow for a miracle anti-poisoning elixir.

But again, that becomes a subservient concern when you sign up to a bill of rights, and attest to global democratic treaties that oblige you to respect sovereign boundaries.

In recent years the ANC’s critics have spoken of its creeping “moral agnosticism”. It’s actually worse than that — the party now seems to be embracing a far more active atheism, in which it no longer believes in the ethically courageous path.

MARKET WRAP: JSE slumps as recession fears back in the ...