The minister’s apparent attempts to slap lipstick on the ANC pig are in keeping with the blind obstinacy of the average ANC politician, who seeks blame for the party’s woes everywhere but within the party itself 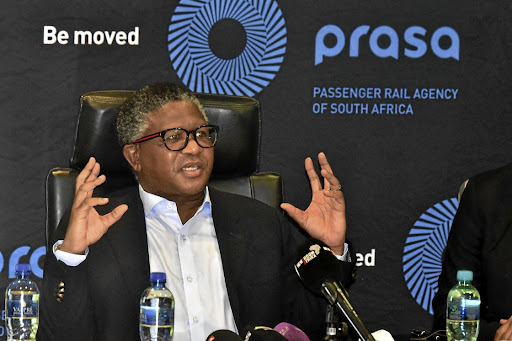 In late 2021, as acting chief justice Raymond Zondo was wrapping up the commission of inquiry into state capture, SA’s fearless transport minister and ANC head of elections, Fikile Mbalula, was running his mouth off about the country’s national broadcaster.

According to Mbalula, the ANC’s dismal election performance — which dipped below 50% of national support for the first time — was the fault of the SABC. His argument was that the Service Delivery Gauge show on the national broadcaster had focused only on failing ANC municipalities; the SABC had run a "campaign" that convinced potential voters not to cast their ballots, he said.

Now, a weekend report suggests that the attack on the SABC was way more sinister than the bluster of a verbose showman with the gravitas of rancid polony. According to the City Press newspaper, a letter by embattled SABC news head Phathiswa Magopeni suggests blatant and grievous political interference in the public broadcaster.

Specifically, Magopeni names Mbalula, ANC deputy secretary-general Jessie Duarte and party spokesperson Pule Mabe as harassing and intimidating journalists. More concerningly, in her telling, her complaints about such behaviour to the SABC board chair and CEO elicited no support, but instead a directive to comply. And, no surprise, according to City Press’s sources, the current manoeuvring to oust Magopeni from her position at the broadcaster comes at the behest of politicians.

Now, the SABC has a long and less-than-proud history as lickspittle to the powers that be. An institution riven by corruption and political interference in the dark days of apartheid, it staged something of a resurgence with the turn to democracy — until, in the hands of the majestically unhinged Hlaudi Motsoeneng, it regressed to a toadying mouthpiece of Jacob Zuma’s ANC. But in the past few years, an extended public process was put in place to turn things around, and build a broadcaster that served the public rather than the vested interests of the powerful. And it seemed to be working: advertising grew, the quality of its shows improved, and it seemed as if the SABC might actually be fulfilling a mandate that had grown dusty under the tenure of the apparatchiks.

If Mbalula and his ilk were to have their way, it seems, all those hard-won gains would be lost.

Of course, Mbalula’s apparent attempts to slap lipstick on the ANC pig are in keeping with the blind obstinacy of the average ANC politician, who seeks blame for the party’s woes everywhere but within the party itself.

The good minister need only have looked beyond Auckland Park to see the real reasons for the abysmal electoral showing: the collapse of small-(and not-so-small-) town SA in the hands of the ruling party; revelations of a fiscus looted blind; of an economy brought to its knees by venality and mismanagement, with no more than lip service paid to the idea of reform; of criminally negligent service delivery.

But, then, Mbaks is always up for a bit of diversion. His Twitter account, to take one example, is a highlights reel — a small snapshot of achievement in a performance wasteland. Even his recent oversight visit to Cape Town to inspect the station upgrade programme was an apparent exercise in illusion.

As United Commuters Voice spokesperson Joao Jardim told IOL, the oversight entourage was shuttled to various upgraded stations by taxi. But just beyond the Elsies River station, cables had been stolen, he said; and near Goodwood station, there’s apparently a community living on the rail lines.

Perhaps if our ministers spent the effort on their portfolios that they do in trying to sell the illusion of the ANC they wish they had, they’d have more to boast about in the first place.

‘We are ready for them’: Fikile Mbalula warns taxi relief fund scammers

‘We are ready for them’: Fikile Mbalula warns taxi relief fund scammers