EDITORIAL: Relief as government does u-turn on booze ban 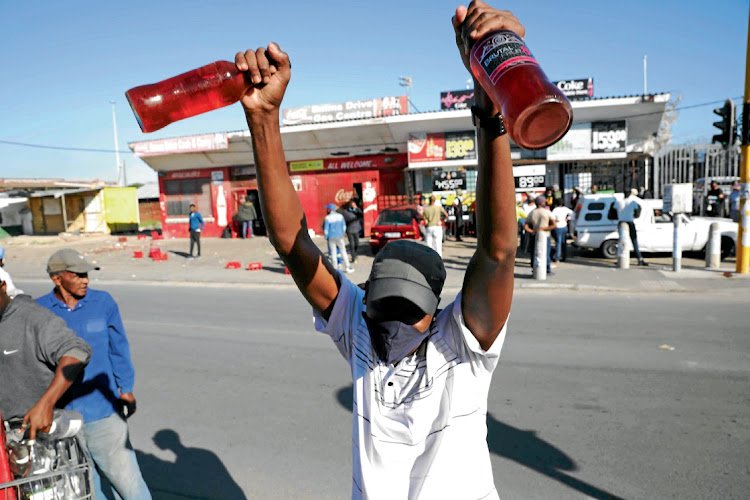 A man celebrates with his liquor after standing in a queue to buy the bottles in Nyanga, Cape Town. Picture: Esa Alexander

Having alerted booze companies to an imminent alcohol ban over Easter, the government appears to have had a last-minute change of heart. Earlier this week, the department of trade & industry told liquor companies to expect an 11-day total ban — stirring up a frothy fury from the industry.

But then President Cyril Ramaphosa gave a decidedly tempered speech this week on Tuesday. The president, seeming relaxed and entirely in control after his triumph at the ANC national executive committee meeting this weekend, not only kept the country at the lowest lockdown level over Easter, but only banned stores from selling alcohol from Friday to Monday. Restaurants, shebeens and taverns can sell alcohol throughout.

"Restrictions should not be more severe than is necessary to contain the spread of the virus," he said. "We continue to be guided by data on the epidemiological situation and by expert advice and wide consultation with social partners."

This, of course, isn’t how it has been. Many of the restrictions last year were entirely unnecessary, and more a reflection of the governing party’s instinct for statist control than a necessary reaction to stem infections. The 20-week alcohol ban, a baffling ban on cigarette sales, and bizarre limits on what clothes could be bought in shops are three examples. Science was clearly the last consideration.

This is why the liquor traders feared the worst.

So why was the looming alcohol ban reversed? Could it mean that Ramaphosa’s government, aware of how its Covid-19 own goals have squandered the goodwill it had a year ago, has softened its command-and-control attitude? Has this given way to a new era of pragmatism and good sense — the sort of thing we’ve rarely seen until now from people like co-operative governance minister Nkosazana Dlamini Zuma?

It would be comforting to believe that.

However, it is also possible that a ban was scotched after government’s national coronavirus command council saw the extent of the opposition from the liquor industry.

In recent days, Sibani Mngadi, chair of the SA Liquor Brandowners Association told CapeTalk: "We have been told that we are going to shut down for 11 days … we hope that they can reconsider because it’s not a solution at all." Mngadi’s organisation launched an "access to information" request for the "information that government has used to decide to yet again ban alcohol".

The National Liquor Traders Council’s Lucky Ntimane said his organisation "will not accept" a new ban. "We will do whatever it takes to make sure that we push back against the narrative that seeks to impose a ban on the industry when all the data we have does not support that," he said.

The industry would also have wasted no time in pointing out the obvious hypocrisy in allowing up to 250 to attend indoor religious gatherings (a recipe for a super-spreader event if ever there was one) but then preventing someone from having a beer at home with their family.

Perhaps, finally, the protestations from the industry — that the previous booze bans hadn’t definitively countered the virus, but had destroyed jobs — hit home. After all, those bans not only cost 165,000 jobs and billions in investment, but the Beer Association estimated they shaved 1% off SA’s GDP, as the industry lost R36bn in revenue.

These lighter-touch rules probably wouldn’t have been the first choice for the more statist-minded ministers, like Dlamini Zuma and police minister Bheki Cele — politicians for whom every problem is a nail in search of a hammer.

The optimists would hope this is an indication that the government, after implementing one of the harshest lockdowns in the world last year, has learnt from the ordeal and is now aware of the limitations of those rules. And that a smarter, more targeted approach to a virus that is going nowhere anytime soon is the better way, We hope that’s the case — but we remain sceptical.

President Cyril Ramaphosa announced that South Africa would remain on alert level 1 but will endure some alcohol restrictions during the Easter long weekend.

Alcohol will not be allowed for off-site consumption over the Easter weekend, says President Cyril Ramaphosa
National
5 months ago
Next Article