The Magashule faction in the ANC caucus is unlikely to vote for the removal of Mkhwebane, even if this is a caucus position, given her usefulness in its fight against Ramaphosa 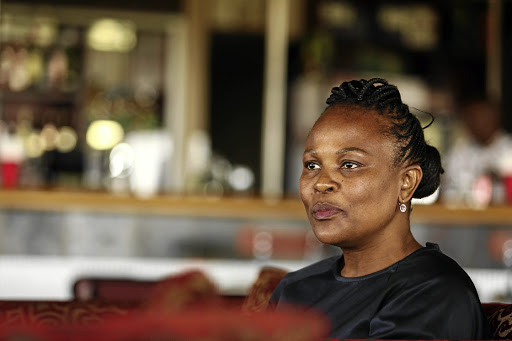 It was not accidental that the ANC’s parliamentary caucus is packed with loyalists of former president Jacob Zuma and secretary-general Ace Magashule — think Mosebenzi Zwane, Bongani Bongo, Faith Muthambi.

It was done rather purposefully — in a process driven by Magashule — in the run-up to the 2019 national election, and its benefits for him and his faction are about to be put to the test. Public protector Busisiwe Mkhwebane is set to face potential removal from office, requiring two-thirds of MPs in parliament to agree, and a united ANC caucus is key in order to remove her.

But this is unlikely, particularly given the alliance forming between the Magashule/Zuma axis and the EFF, fierce Mkhwebane defenders. The upcoming tussle over Mkhwebane’s fate will also provide insight into how useful that tête-à-tête over tea between Julius Malema and Zuma actually was.

As expected, it is damning, finding prima facie evidence that Mkhwebane is incompetent and has committed misconduct.

The report is quite something, evaluating a string of damning court judgments against Mkhwebane in relation to some of her most politically loaded investigations.

They include her botched probe into the Gupta-linked Vrede dairy project, the report on the Bankorp-Ciex "lifeboat" in which she sought to instruct parliament to alter the constitution to change the mandate of the Reserve Bank, the SA Revenue Service "rogue unit" report and the CR17 funding report, all of which have been set aside on review.

The first indication that Mkhwebane’s tenure in the critical chapter 9 institution spelt trouble was when she directed television channels in the public protector’s Centurion headquarters to be changed to the then Gupta-owned ANN7.

Meeting Zuma and the State Security Agency before concluding the Ciex report and failing to disclose it, was another indication. The three-member panel found that this amounted to misconduct.

"Turning to another example, namely the Vrede dairy report, the PP [public protector], among other things, altered the final report and gave the premier [Magashule], who was implicated, discretion to determine who the wrongdoers were," the three-member panel found.

The EFF reacted to the panel’s findings almost immediately from its communication headquarters, Twitter. "The Public Protector @AdvBMkhwebane is not going anywhere. She will finish her 7 year term in office," tweeted EFF deputy president Floyd Shivambu.

But whatever the EFF says, parliament can now begin proceedings for her removal from office. However, this will require a two-thirds majority in the house — the ANC alone does not have the numbers to do this, even if its entire caucus votes with it.

The Magashule faction in the ANC caucus is unlikely to vote for the removal of Mkhwebane, even if this is a caucus position, given her usefulness in its fight against Ramaphosa, particularly over the funding of his 2017 ANC election campaign.

The factional battle now raging in the ANC national executive committee is about to spill over into parliament. Will the ANC caucus do the right thing, or will the Magashule faction, working with the EFF, ensure that the public protector remains in her post?

Mkhwebane still faces perjury charges after she lied under oath in affidavits submitted to court. Her days as the Zuma faction’s blunt instrument are numbered, either way.

What is critical for Ramaphosa, if he indeed wants a second term, is that he delivers more speedily on the vaccine rollout
Opinion
1 month ago

At each period of intense factional conflict in the governing ANC in recent years, SA’s judiciary has been the go-to whipping boy for besieged ...
Opinion
1 month ago

EDITORIAL: The unveiling of Mkhwebane

South Africans should not only reject a ‘protector’ with such a frosty relationship with the truth, they should also reject any party that seeks to ...
Opinion
4 months ago
Next Article

Protector Busisiwe Mkhwebane could be on her way out

Mkhwebane had a ‘reckless determination to nail the president’, Constitutional ...

Protector Busisiwe Mkhwebane could be on her way out

Mkhwebane had a ‘reckless determination to nail the president’, Constitutional ...