The three-day meeting took a sombre tone, signifying the real possibility that this is the ANC’s last policy conference as governing party 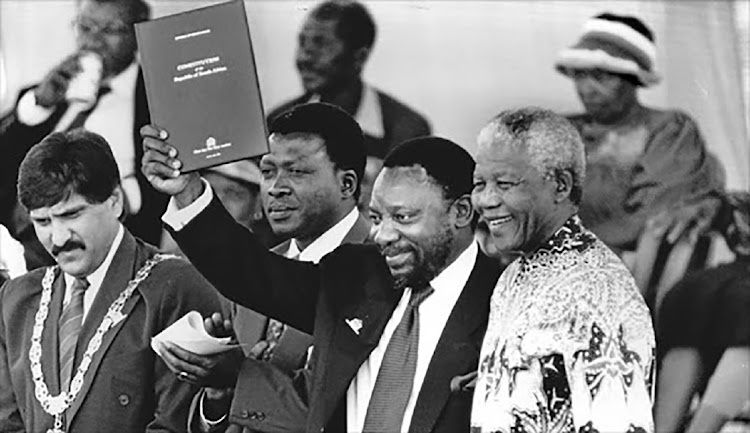 President Cyril Ramaphosa, who was ANC secretary-general at the time, stands next to President Nelson Mandela as he holds up a copy of the new SA constitution at its signing in 1996. File photo: ROBBIE BOTHA

The ANC’s policy conference ended on Sunday, wrapping up the same way it started: with wimpy singing. As ANC head, President Cyril Ramaphosa gave the opening and closing address. We can read a lot into the lack of enthusiastic singing at the beginning and end: perhaps a sign of an organisation struggling to connect with its leader despite him being the sole contender ahead of its elective conference in December.

Ramaphosa gave his trademark managerial-style inputs, often to very little applause, even when he delivered what ought to be strong message themes, such as the fight against corruption. Maybe there’s a realisation that the job he faces is tough. So tough that he will soon find himself in a cold place of solitude, even though many comrades surround him.

The branches are stuck with the reality that they have him because he is the only candidate they can take to the polls for decent returns, even though he fails to deliver a compelling vision.

After delivering the closing message, Ramaphosa posed for the cameras and joined a choir from Soweto’s Daliwonga High in song. The youngsters had been invited to sing at the conference, but that fell off the programme for some reason. Singing with Ramaphosa, though the main hall had largely emptied by then, would have made up somewhat for them.

Ramaphosa then moved on to interact with some of the remaining delegates, starting with a group from the Congress of SA Students (Cosas). Cosas is just like the ANC Youth League but at school level. Its members are used to making demands and chanting slogans like “Each one teach one”. They would have particularly enjoyed the conference, where the ANC leaders kept demanding societal and economic change as if they were not responsible for leading the changes.

Some quarters in the ANC also want youth unemployment to be declared a crisis. As to what then, nobody bothers to ask!

The “demand chorus” was started by Ramaphosa on Friday when he said the only way for the ANC to avoid sharing power with other parties at the local level is to win elections outright. How the ANC must do that, nobody knows! His party colleagues joined the chorus, demanding an end to gender-based violence, poor economic growth, unemployment, and so on. Everything must end. As to how, only they know, and they forgot how to articulate it.

Ramaphosa would have left a depressed man and a happy man at the same time. His faction thoroughly defeated his detractors from the radical economic transformation (RET) team. The Ramaphosa team’s machinations started with the “management” of the delegation to the conference — about 2,000 delegates from across the country were carefully chosen.

And before and during the conference, the Ramaphosa camp used various tactics. A meeting organised by Paul Mashatile, the acting secretary-general, on the eve of the summit and attended by chairs from the nine provinces, national chair Gwede Mantashe and Ramaphosa seems to have done the trick. By the time the conference started, the delegates had dropped blatant hostilities and were prepared to engage soberly.

However, a cynic would say the three-day meeting took a sombre tone, signifying the real possibility that this is the ANC’s last policy conference as governing party. Smart money is on the ANC falling below 50% in 2024, meaning it would need coalition partners to stay in power. What value would its policies serve then, when the country would be under a different political arrangement with various parties running the government?

A delegate aligned with the communists placed the CR-RET split of the delegates to about 80% to the Ramaphosa camp. Another sign of the thumping of the RET is how Mantashe, as chair of the plenary session, gave a verbal version of a karate kick to the chest of prominent RET figure Supra Mahumapelo during the discussions. Mahumapelo had moved towards the microphone stand, and Mantashe jumped up to tell him to sit down. In previous conferences, this is the moment where the meeting would have descended into chaos, as some delegates would insist that Mahumapelo be allowed to speak. With his tail between his legs, Mahumapelo went to sit down. That confirmed just how weak the RET faction is.

The December elective conference may well be a different kettle of fish, as there will be a lot to lose. Also, it will not be easy for the national office to “manage” branches then. They will be more demanding and aggressive as they assert their right to nominate their delegates. There’s also the small matter of money politics; ANC conferences are notoriously money driven.

The Phala Phala scandal did not feature in this conference as a point of politicking. That may also mean there’s a lot of politicking to happen between now and December.

What is clear is that Ramaphosa has no opponent at this stage. That places the tension points around the battle for his deputy.

Also, at the policy level, he has a lot to worry about, as there are no ideas or suggestions geared to reversing the ANC’s electoral decline or improving SA’s economic situation. Ramaphosa will be acutely aware of how little he has to play with in terms of policy and how overwhelmingly difficult it is to change the ANC.

The delegates know how ineffective he has been in bringing new politics into the party. Hence they do not bother clapping or cheering for him. They want him for one thing alone: to magically reverse or slow down the ANC’s electoral decline. As to how he does that, nobody cares.

A commentator noted that the poor-quality policy suggestions were signs of the beginning of the end. It may well be the end of the end, considering the dearth of new ideas and how ordinary the party of Nelson Mandela and OR Tambo has become.

Those that called for the step-aside rule to be scrapped failed to convince the plenary of 1,800 branch delegates at the party’s national policy ...
Politics
2 weeks ago

If you boo, you get booted out, ANC chair Gwede Mantashe told Business Day
Politics
2 weeks ago
Next Article