From the sublime to the lowly, automotive history makes a comeback 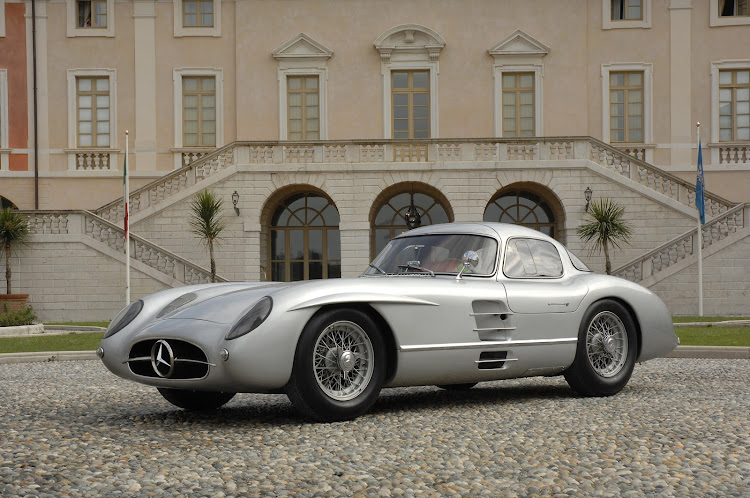 One of the two 1955 Mercedes-Benz 300 SLR Uhlenhaut Coupés ever built. Picture: SUPPLIED

Have you ever dreamt of owning a Moskvich, the Soviet-era car brand that went out of business 20 years ago? No, I didn’t think so. How about a 67-year-old Mercedes-Benz sports car? Hmm, now that’s a different matter. You’re definitely interested.

Motoring’s glorious, and less glorious, past has come roaring into the present this month. Last week, it was revealed that a 1955 Mercedes-Benz 300 SLR Uhlenhaut Coupé had sold at auction a few days earlier for a bowel-loosening $142m. That’s R2.2bn to you and me — enough that even Sibanye-Stillwater CEO Neal Froneman, whose 2021 pay package was worth R300m, might think twice about buying.

The car is one of two based on an open-topped, two-seat racing car built by Mercedes for the 1955 world sportscar championship and driven by grand prix legends Juan Manuel Fangio and Stirling Moss. The car dominated that year’s world sportscar championship, which included the famed Mille Miglia, a 1,600km round trip on public roads, including mountain passes, between Rome and Brescia.

Moss gave what is considered the greatest performance in the race’s history, averaging 160km/h and finishing 32 minutes ahead of second-placed Fangio. Of the more than 600 drivers who entered the race, fewer than 300 finished and two died in crashes.

Two closed-top versions of the car were commissioned for endurance events but never raced. Instead, Mercedes kept them for show, insisting they would never be sold. That changed this month when the company secretly auctioned one at its museum in Stuttgart, Germany. Insiders say only 10 people, all carefully vetted to make sure they could give the 300 SLR Coupé the love and attention it deserves, were invited to bid.

The winning bid, by an unnamed collector, almost doubled the previous known record for a classic car — $78m paid in 2018 for a 1962 Ferrari 250 GTO. Mercedes-Benz says the money will be used to set up a charitable fund for young people.

You’d need to take a lot of zeros off the SLR’s price to find a realistic one for a Moskvich. The brand made its debut in 1946 after Soviet authorities moved an Opel assembly line from Soviet-occupied Germany to Moscow and sold a modified Opel Kadett as the Moskvich-400.

Unlike East Germany’s Trabant car brand, which was so spectacularly bad that it is now a cult car — more than 30 years after the last one was built — Moskvich eventually became known for mundane reliability. Many cars were exported, most to Soviet bloc countries, but also to Scandinavia, France and the UK. A handful even made their way to SA.

As the post-Soviet Russian market opened up to outside brands, Moskvich sales fell and its parent company declared bankruptcy in 2002 and stopped production.

Some analysts say the plan is unrealistic and that it will take at least two years and $1bn to develop a new car. Perhaps they would change their tune if they looked at SA’s automotive history

Now, because of Russia’s invasion of Ukraine, the name could make a comeback. Renault is among motor companies halting activities in Russia because of international sanctions. It has sold its Russian subsidiary to a local automotive research institute for a symbolic one rouble.

Russia is Renault’s second-biggest market, after France. The French company employs about 45,000 people there. Through its own brand and ownership control of AvtoVaz, a Russian company whose brands include Lada, it accounts for about 30% of the Russian car market.

The sale of its Russian assets includes a six-year buyback clause, reflecting Renault’s stated desire to return to Russia once (if) sanctions are lifted and relations return to normal.

By then, Renault may find its product line very different. To protect jobs, Russian officials say the main Moscow factory must produce cars — and that Moskvich’s return may be the answer. Reports say there are almost 200,000 Moskvich cars still registered in Russia, of which more than 45,000 are over 35 years old.

There is also talk that AvtoVaz may produce the Renault Duster under the Lada name, at another assembly plant.

Moscow authorities are said to be talking to Chinese company JAC about using one of its vehicle platforms for the new Moskvich. Officials say they hope production of the Moskvich, which Moscow mayor Sergei Sobyanin says has “a long and glorious history”, will begin by the end of 2022.

Some analysts say the plan is unrealistic and that it will take at least two years and $1bn to develop a new car. Perhaps they would change their tune if they looked at SA’s automotive history.

In the later years of anti-apartheid sanctions, Ford and General Motors both disinvested from SA, Ford leaving its assets to SA Motor Corp (Samcor) and GM to Delta Motor Corp. Both later bought back their operations after the advent of democracy.

Some other multinationals, like Toyota, that did not own the SA companies that bore their name, distanced themselves by reducing engineering and technical support.

This did not result, as some predicted, in industry collapse. Rather, it encouraged lateral thinking and engineering ingenuity. Vehicles may not have been as technically cutting edge as those in developed markets, and some shapes may have been dated (I went on some car launches where, if manufacturers had not told us the vehicles were new, we wouldn’t have guessed by looking at them) but the industry more than survived. Indeed, Delta was more profitable than GM had been or was after it returned.

I wonder if there’s a Russian equivalent of ’n boer maak ’n plan.

Mudiwa Gavaza is joined by David Furlonger from the Financial Mail, who specialises in SA’s automotive industry
Companies
1 month ago
Next Article