Mike Schüssler, the ‘people’s economist’, was able to explain in crisp language what any policy decision meant at home, in the grocery store, and in the workplace 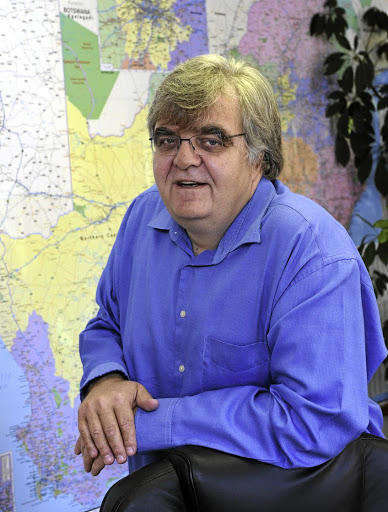 Dawie Roodt, a fellow economist and long-standing friend, tells a story about how he once asked Mike Schüssler whether he’d be keen to stand in Marthinus “Kortbroek” van Schalkwyk’s New National Party as a candidate.

Turns out that Schüssler — a DJ at RAU Radio during his student days — had once been fired by Van Schalkwyk, the chair of RAU’s student body, for disparaging the Nats on air. Schüssler, recalls Roodt, replied: “Nie ’n fok gaan hy my weer fire nie. [Not a fuck will he fire me again.]”

Schüssler, who died after a short battle with throat cancer this week, aged 60, made his career as an independent and lateral thinker.

He would trawl the data in Stats SA’s annexures, transforming numbers into useful information that anyone might understand.

In his early years he worked at Transnet, the National Treasury, FBC Bank and SAA, and in 2000 he went into consultancy, advising T-sec (previously known as Tradek.com), before founding his own firm, Economists.co.za, in 2005.

Paul Theron, CEO of Vestact, describes how at Tradek, Schüssler’s job was to come up with fun ideas, and write about the economy.

“He came up with a review of the new SA economy, [detailing its] strengths and weaknesses. We wanted to invite the media, and he suggested we do that at a lunch at the original Nando’s branch in Savoy. Everyone loved it — including the Nando’s bosses,” he says.

Schüssler loved a debate, and Roodt describes him as a formidable opponent with an astounding memory for data that others had long forgotten. As youngsters, the two belonged to various informal groups of economists — among them prominent Treasury professionals and academics.

Says Roodt: “Mike was this wild big guy with the beard and the voice and he would jump up and say ‘Fuck that!’ in front of all these very distinguished professors.”

As an occasional contributor to the FM, he never missed a deadline, filing considered, sharp analyses that invariably cut to the heart of an issue

As it happens, Mike wasn’t his real name at all. He was born Hans Ullrich Schüssler, to German parents in Egypt, but earned the nickname at university given his resemblance to burly boxer Mike Schutte. Schüssler was certainly a bear of a man, but, says Roodt, he had the softest heart.

He had the rare ability to decode economic jargon, scything through the noise to find the stories that really mattered. For this, he earned the moniker as the “people’s economist” — someone who was able to explain in crisp language what any policy decision meant at home, in the grocery store, and in the workplace.

Schüssler was prolific in his research and his ability to market his own skills as an economist: he consulted to the Treasury, DaimlerChrysler, BP, the SA Property Owners Association, the Financial Planning Institute of Southern Africa, the Debt Counsellors Association of SA, Capitalworks and the SA Poultry Association, as well as mines, banks and pharmaceutical companies.

A voracious music lover, and someone who appreciated a good meal, it’s probably unsurprising that he dabbled in the restaurant business in the early 2000s.

At the time, he co-owned an offbeat restaurant and live music venue called Back2Basix in Westdene. Unlike his economic insights, it didn’t do very well — but, like most of what he did in life, he had great fun with it.

As an occasional contributor to the FM, he never missed a deadline, filing considered, sharp analyses that invariably cut to the heart of an issue.

Mike was this wild big guy with the beard and the voice and he would jump up and say ‘Fuck that!’ in front of all these very distinguished professors

On budget day last year, Schüssler wrote an article for the FM — “SA’s Big Budget Secret” — about how to cut through the spin of the comforting government budget data, to see the real picture of how people are actually living.

“It’s the same each year: a PR exercise that leads many commentators down the garden path, while analysts in the fixed-income market, and those who do their own investigations, are drowned out by the noise … this is the real trick by government: tell people what they think they want, but never give the big picture away,” he said.

Schüssler wrote that a decade earlier, he’d begun to wonder what was really going on. He spent years collecting data, and the result, he said, was astounding: it revealed that SA had the 10th-largest overall tax burden of all countries with a population of more than 1-million — yet SA’s personal income taxpayers were also the smallest share of the population of any country he could find.

“This is not economically feasible,” he wrote. But instead of confronting this, the government simply spent more — not least on the rocketing cost of civil servants’ salaries.

“SA’s compensation of civil servants as a percentage of GDP is second in the emerging-market universe, after Namibia … But despite this, the outcomes are a disaster — just think of our poor levels of educational attainment, high levels of crime, and collapsing public transport, road and water infrastructure. The answer in SA is never really to fix the problem; it’s simply to spend more,” he wrote.

While corruption and incompetence are a serious problem, he wrote, the most serious is the one we’re not told about: “The government is not interested in containing spending — doing so would be political suicide. In SA, political promises still win you friends, votes and jobs for those close to you. The rest can use pit latrines for all the powerful care.”

It was the sort of unvarnished but prescient analysis Schüssler excelled in producing. It is for this reason, as much as for any other, that his death leaves an immense hole in our society: our understanding of the world around us will be all the poorer for his passing.

Don’t let the budget PR fool you: SA’s problem is that the government spends too much. That’s not about to change
Special Reports
1 year ago
Next Article